Showing posts from September, 2009
Show all

Psalm 20 - A Lullaby about Letting Go

- September 26, 2009
My Child, May the Lord deliver and defend you. May She enfold you in Her kindness. May you fulfill your promise And Your heart’s desire be fulfilled by Godde. For you are not only mine, little one, But a child of Godde. *********************************** To compare it to the original, go here I started putting this psalm to music about a year ago and like most of my projects, it is still not finished... The song is a lullaby that besides voice, also uses flute and violin. I never finished it, because I got so distracted with my illness and with other stressful events/trauma in Milledgeville. I am having trouble not being bitter and resentful over the things that happened there. Everything happens for a reason and yet our purpose is not to question why bad things happen, but to move on when they do. It is difficult, but day by day, I am learning to let go of old expectations and just be. Speaking of taking things, "day by day," here is the song, "Day by Day," fro
1 comment
Read more

Sunrise Food - Godde's Goodness Made Manifest in My Food 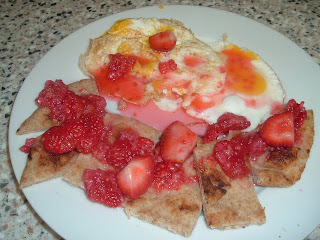 In my version of Psalm 19, I talk about Godde's knowledge being made manifest in "the sun rising and setting," and this meal I made that day also reminds me of a beautiful sunrise or set! Two eggs, sunny side up Toasted Flatbread Raspberries and Strawberries soaked in Lemonade Put some strawberries and a bunch of raspberries in a little bowl with about 1/4 cup of lemonade, mush up the raspberries, and let the mixture set until the toast and eggs are done. Pour the mixture on top of the toast and eggs. Enjoy! The result was beautiful to my eyes and mouth and mind, as I gave thanks to the Holy One for being able to enjoy a delicious dinner!
1 comment
Read more

More Recovery Poetry AND I Can Finally Say I Am Published! 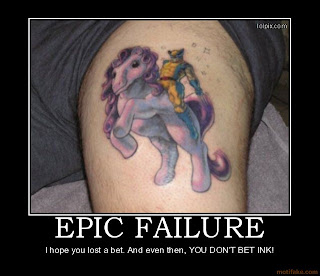 I am really proud of myself! The Nami Gwinnett newsletter just came out and on page ten were six of my poems! Of course, it would be nice to be paid for my work, but still, any recognition is better than none and knowing that the people I submitted my work to valued it enough to publish them gives me hope that another publisher might too. Three of the poems are ones that I have previously posted here - both of the ones on February 14th and the poem entitled, "Do Not Believe the Lie" on August 28 . Here are the other three: Failure Failure Is just a word away. A refusal To arise in the morning, A complacency When the sun is not shining; When war storms through my door, Failure is just the failure to make another mistake. (I wanted to picture failure, w/out being depressing. Did it work?!) The Phoenix Don't label my life with a Finally Don't tell me that the light is at the End. For the light is continuous- There is no finally. Life carries on after death- A
1 comment
Read more

Clerks II ABC Music Video - If This Doesn't Make You Smile, Nothing Will!

- September 20, 2009
I was feeling a little down and then I watched the last half of Clerks II and everything was alright. lol I wanted to share the love, so watch the video and be happy!
3 comments
Read more

Silent Sunlight, Music & Lyrics by Cat Stevens, Sung by Me! 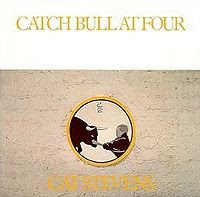 Besides posting my own poetic psalms at least once a week, I thought I would add a new feature involving my artistic talents - a video of myself playing and probably singing a song that I find inspirational. The instrument of choice may be the piano, guitar, mountain dulcimer, flute, organ, or perhaps just my own voice. The first song is Silent Sunlight, written by Cat Stevens. I'm singing this song this Sunday at church , so I thought this would be good way to practice. Hopefully, this will help improve my singing and playing-I know that it has already improved my performance for Sunday, because hearing myself sing the song the first time I played it back, reminded me not to get lazy with my pronunciation. I could barely make out the lyrics to the first verse, so hopefully you will understand it in this version! ********Whoops! Sorry! I tried and I tried, but I couldn't get the video to upload onto Blogger-I did get it to upload onto YouTube, but the video was majorly screwed
Post a Comment
Read more

- September 17, 2009
HEADCASE: Lesbian, Gay, Bisexual, Transgender, And Queer (LGBTQ) Writers and Artists on Mental Illness Headcase will be an anthology comprised of 15-20 nonfiction pieces by writers and artists both established and new, exploring the theme of mental health, mental illness, and mental health care in the lesbian, gay, bisexual, transgender, and queer or questioning (LGBTQ) community. The book is currently being considered for publication by a major queer press. The anthology seeks essays, poetry, and comics by queer consumers of mental health services or queer individuals who have been diagnosed, but do not identify as patients, with mental illness. Works should explore the intersection of queerness and mental health and can include topics such as psychotropics; Gender Identity Disorder and its acceptance or rejection as a legitimate mental disorder; conventional v. holistic treatment; experiences in therapy, groups, and/or institutions; how race and ethnicity, class, sex, gender iden
1 comment
Read more

Psalm 19 - Godde is Knowledge Made Manifest 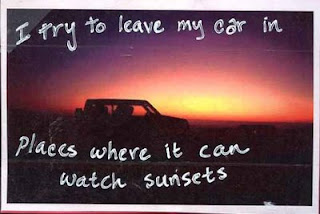 Since the heavens were made, They have praised their Creator- And they still do today. Each day and night reveals Godde’s glory- To deny Godde is to deny knowledge. O All-knowing One, Your decrees are my decrees, Your laws are my laws. For I have witnessed A soul converted, The simple become wise A heart rejoice And Eyes enlightened. I have seen the hungry fed The sick healed, The dead rise, And The miserable smile. And while evil does surround, It is beaten every time I survey Your knowledge made manifest in The sun rising and setting. (an old favorite Post Secret ) ************************************************************ Compare it to the original, here .
1 comment
Read more

Family to Family Class in Walton Needs YOU!!!

- September 08, 2009
The National Alliance on Mental Illness of Georgia is offering the Family-to-Family Education Program at the offices of the Dream Center of Walton – Gwinnett starting Monday, September 14 at 7:00 p.m. and running for 11 consecutive weeks for 2 and ½ hours each Monday night. The Dream Center Offices are located at: 109 Lee Byrd Rd Loganville, Ga. 30052 404-387-5740 The NAMI Family-to-Family Education Program is a free, 11-week course for family, friends, loved ones and caregivers of individuals with severe mental illnesses. ● The course is taught by trained family members ● All instruction and course materials are free to class participants ● Over 115,000 family members have graduated from this national program Call or e-mail Brenda Vinson to register 678-231-6263 or 770-338-0468 bvquilts@bellsouth.net Class size is limited so register now! Check our website for more information www.namiga.org ******************************************** I know that I have promoted this cl
3 comments
Read more

Psalm 18 and Dealing with Disappointment 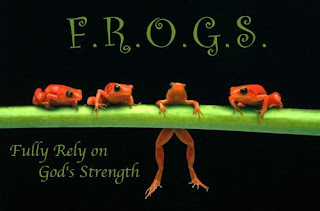 They were too strong for me, But my Godde is my stronghold And nothing is too strong for my Godde. He is as gentle as lamb’s wool And his lovingkindness has fed my heart; Even his gentleness makes me strong. Godde heard my cry and conquered chaos. She drew me out of many waters And lifted me from the well of sadness. She has uncovered the world’s foundations For my own name’s sake. Surely there is no one greater than my Godde. He is gentle, She is mighty- They are one and make me one. For who is my Godde except the Holy One? The Rock of my Salvation shall live forever! To compare it to the original, go to Bible Gateway . ********************************************* Who is the "They" in the psalm? Depression, pain, tiredness, and self-doubt Well, that's my "They" anyway. I had a great time Friday and Saturday at DragonCon, which is a huge sci-fi convention that I attend every year, but I could not go Sunday and today, because I was too sickly. At first, I
Post a Comment
Read more

We Can Find Strength in Our Vulnerability

- September 06, 2009
We don't always have to be strong. Sometimes, our strength is expressed in being vulnerable. Sometimes, we need to fall apart to regroup and stay on track. We all have days when we cannot push any harder, cannot hold back self-doubt, cannot stop focusing on fear, cannot be strong. There are days when we cannot focus on being responsible. Occasionally we don't want to get out of our pajamas. Sometimes, we cry in front of people. We expose our tiredness, irritability, or anger. Those days are okay. They are just okay. Part of taking care of ourselves means we give ourselves permission to "fall apart" when we need to. We do not have to be perpetual towers of strength.. We are strong. We have proven that. Our strength will continue if we allow ourselves the courage to feel scared, weak, and vulnerable when we need to experience those feelings. Today, God, help me to know that it is okay to allow myself to be human. Help me not to feel guilty or punish myself when I
Post a Comment
Read more

Dear Angela, It is with love That I hold my heart From you. And it is most certainly With pain each day that I keep My heart hidden from view. But I must. For you are not acting In love Or In kindness Or Anything even resembling Your own true self. I cannot let cocaine steal My heart, my friends, my life. I cannot let it destroy me Like it has destroyed you! And so I wait. I wait for the day When you return to me Drug and drunk FREE. OR I wait for the day I discover that you opted Instead to come home to heaven. Either way, I am heartbroken And sad That you do not consider My love and friendship- And that of your two Beautiful boys- To be enough to keep you away From the tortuous trip down cocaine lane. ******************************************** This month is National Alcohol & Drug Addiction Recovery month. If you click on the widget on the left, then you will be directed to a site with tons of recovery support services and a listing of all the events celebrating
4 comments
Read more
More posts