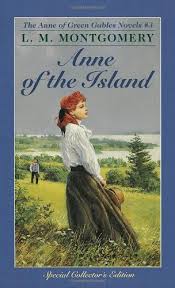 Anne of the Island by L.M. Montgomery – I am really enjoying these Anne books!  Anne of the Island is when Anne goes to college and it brought back memories of dating, late night talks, the comraderie between college friends-really, not much has changed in a hundred years!  The book brought back some painful memories too, as Anne’s relationship with Diana began to change.  Most childhood friendships change as interests diverge and people grow up, but that doesn’t mean that it isn’t very painful.  It’s a part of the “growing pains,” I guess.  I’ve experienced it, as I am sure everyone has at some point.  For a long time I blamed the growing apart on my mental illness, so it was nice to be reminded that it is a common experience.  The beginning of the book takes place approximately in 1903, so it is really quite revolutionary that Anne goes to college and is supported in her academic ambitions.  Not only that, but at this fictional college, there are enough other women attending that she is able to rent a house with three other female friends and she had many other female friends who attend this college.  This detail defeats the stereotype that women were never prized for their brains in the past.  I absolutely loved it that Montgomery had the character that was known for being shallow, indecisive and beautiful, also being incredibly good at math and winning a math scholarship, which successfully broke apart the dichotomy of the beauty myth, which has been around a lot longer than perhaps we have realized.  As Naomi Wolf says in her book, The Beauty Myth, “Culture stereotypes women to fit the myth by flattening the feminine into beauty-without-intelligence or intelligence-without-beauty; women are allowed a mind or a body but not both.”  I think reading books that show women being prized for their brains and their beauty is important; I think reading books that show women being friends and not just talking about men being important – although talking about men sometimes is important too!; and I think reading older books that show that these scenarios happened in the past are especially important, because it shows us that what the patriarchy is trying to feed us is a bunch of lies.  Women can be both beautiful and smart; women can be friends and loving towards one another; and there is a basis for a society that values confidant and empowered women. 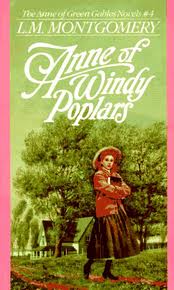 Anne of Windy Poplars by L.M. Montgomery – Now we finally get to the book that the second movie is loosely based on, which I should watch soon, because it’s been too long a time!  Anne gets her first “real” job as a principal of a private school in a small town.  She has to figure out her to get into the good graces of the Pringles, which are the snooty family that controls the town.  This book is interesting, because it’s written in a different format from all the other books - for the most part it’s in the form of letters to Gilbert, who is away attending medical school.  The book is also interesting, because it hardly references Davy and Dora, who I think are L.M.M’s most annoying characters ever.  And call me a softie, but I do really like the story of how Anne befriends the bitter, cranky teacher in town and gets her to loosen up.  Again, I am amazed at how progressive these books are-a female teacher is nothing new, but a female principal, who is even over a male teacher is something else.  Anne is smart, bold, resourceful, clever, and kind, all of which are qualities not usually put together in one woman.
Posted by K.C. Jones at 2:41 PM