This was the month of feminism!  I’m going to do this month’s book reviews a little differently and just do one book at a time.  The two books I read were for my feminist book club. I underlined a lot of passages and wrote down quotes for my “Quotes Book” while I was reading, so I already had a lot of material for more in depth reviews. 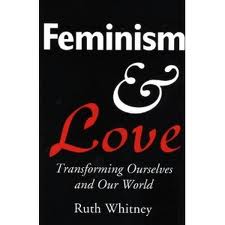 Love & Feminism: Transforming Ourselves and Our Worldby Ruth Whitney

This was the book for my September feminist book club.  All of us thought that it was not nearly as soul stirring or as eloquent as The Beauty Myth was (our book for August), but we did think that it did have a lot of ideas that we certainly appreciated.  I like that she views feminism as a loving way of life, which is very similar to how I view feminism-it is why I cannot separate my Christianity from my feminism either.   (And why I have trouble fitting into most mainstream churches!)  She says that, “feminism is the vision and practice of love.  Feminism is acts of love that eliminate all form of domination […] Feminism is love in action.”  This is very different than simply saying that feminism is women achieving equality to men, which is how many people define it.  I prefer her way of “creating communities of love,” which would certainly go much farther ahead than just closing the wage gap, which in my mind, is simply a step in the right direction.

While we all liked a lot of her ideas, there was a lot that we vehemently disagreed with too!  (That, in itself, was actually quite nice, as it led to a very spirited discussion!)  Our main objection was that we thought her statements were way too broad and simplistic.   For instance, she says that, “Acting dominant not only harms the person being dominated, but it also violates the dominator’s own inner core of love.”   While we agreed that the patriarchal system of domination and coercion is negative and damaging, we thought her statement that acting dominant is harmful, with the implication that it is always harmful was incredibly too all or nothing thinking.  (She could use some DBT!!!)  Both of the other members in the group talked about how they are caregivers and how if they did not “act dominant” while on the job, then their client’s safety would be at stake.  I believe there is a difference between “acting dominant” in a patriarchal, coercive way and “acting dominant” in a loving, caring way.  I would have to read the book again to see if she makes that distinction using different words.

I also thought her explanations for people’s behavior were often too simplistic.  She never addresses the mind-body connection.  She seems to think that all mental illnesses are the result of not receiving enough love and never accounts for chemical imbalances.  The “Power of Love” section is particularly problematic.  She first talks about suicidal ideation in regards to murderers,which  is absolutely ridiculous and stigmatizing.  Then on p.119 she talks about people with mental illnesses in a very impersonal and dehumanizing way.  I was a bit shocked after all of her speech about giving respect to all humans.  Her reasons were all too simplistic.  I get that she is trying to illustrate that these people are all out of touch with their “inner core of love,” but I found her language very triggering as someone who has severe mental illness, myself and I felt it was very insensitive and potentially ablest.  Also, it is hard to be in touch with one’s inner core of love if one’s brain chemistry is mixed up and she never once in the book mentions anything about the mind-body connection, brain chemistry, or genetics, which again, leads me to believe that her take on mental illness is way too simplistic. All in all, she seemed to flip-flop between not giving people any responsibility for their actions or feelings and then giving them too much.

We also thought she seemed pretty codependent once she started talking about forgiveness.  She says: “Once I forgive you I try to trust you again even though you were untrustworthy before,” and, “Forgiving re-establishes my relationship with you even though you injured me.”  What in the world?! In our opinion, this is not feminist theory thinking at all!!!  Should an abused wife go back to her abusive husband just because she “forgives” him?  Should she not put forth the effort to forgive him, just because she is moving on with her life?  From a therapeutic angle I have been taught to view forgiveness as, “I forgive to release myself from my own bondage.”  To forgive does mean that I come back to a place of loving, but if a person has been abusive, then to trust again would be perhaps codependent and definitely damaging!   We thought it was odd that she stressed trusting and re-establishing the relationship when she had just talked about how women give too much of themselves away anyway.  Forgiveness is definitely important, but one does not need to be a martyr.  I thought it was then very wise when a member stated that she thought it was awfully shortsighted that the author said nothing about boundary making, because in her opinion, setting boundaries is a big part of being in a loving relationship.  I agree!  For instance, there is no way that the patriarchy will ever be brought down if feminists do not set some tight boundaries on how they will talk and act to each other and to the world.  (Will they act out in sisterly love towards each other and other people or will they continue in the path of the patriarchy?  Will they take time for self-care or will they follow in the footsteps of patriarchal martyrdom?)

Would I recommend this book?  Well, its audience was obviously for a college class and not for someone who was recovering from an intense injury, like one of our members was. I would recommend it, because it really does have some great ideas and quotes, but just read it with a questioning mind.
Posted by K.C. Jones at 12:43 AM