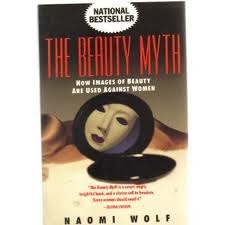 I found the section on religion very interesting and sadly, very relatable.  I can remember attending a dieting program at the church I grew up in when I was a teenager.  Unequivocally, I think dieting and teenagers and church programs together are a sinful combination.  Wolf states, “Our new religion offers no salvation, only a perpetually escalating cycle of sin and precarious redemption.” Even at my last church, a feminist congregation, so many women there failed to see the connections between the diet industry and the patriarchy and would talk about their dieting efforts.  That failure bothered and disturbed me greatly and often made me feel alone in my stand against the diet industry.

The section on hunger has some incredibly thought-provoking passages.  It talks a lot about eating disorders, which in a way is quite lovely, since over twenty years later after the book was written you STILL don’t hear a lot of feminists talking about the issue.  It’s all obesity, obesity, obesity and hardly anyone is focusing on the fact that eating disorders are the mental disorders with the highest mortality rate-not depression and not anxiety.  That makes me so incredibly angry!  She writes, “A cultural fixation on female thinness is not an obsession about female beauty but an obsession about female obedience” (187) and makes the point that women who are constantly hungry tend to be passive, anxious and emotional (188).  How many women are constantly hungry?  Well, how many women do you know are dieting?  It becomes much easier to think of hunger as a means of the patriarchy and as a political tool when one thinks of the billions of dollars the government puts into programs combating childhood obesity as opposed to ending childhood hunger.

Furthermore, Wolf makes the point that whom a society values, it feeds well.  Whom a society allows to be fat without ridicule has the power.  Isn’t it true that it is more socially acceptable for a skinny wife to have a fat husband than the other way around?  Slowly, the tides are changing and we can see that in the visibility of a few more fat female celebrities like Melissa McCarthy or Rebel Wilson.   Several years ago, we only had Queen Latifah.  How lucky for them that they all seem to enjoy being in the comedic role.

I very much appreciate how Naomi Wolf talks about the epidemic of restrictive eating disorders on college campuses on page 208.  I remember this so well and I felt outraged by the lack of action by the counseling department at every school I attended.  Eating disorders have become a bonding experience for the millennial generation and that is tragic.  I remember when I was a member of the feminist organization at Berry College in Rome, GA and the president of the club confided to me how ashamed she was to be a feminist and yet to be a bulimic.  I felt so bad for her.  I told her that it didn’t make her a bad feminist, but in truth, I was unsure and struggling with the same feelings myself.  And while I do believe that it is a disease that needs treatment, I so appreciate Wolf’s un-stigmatizing viewpoint that one can look at it as “self-defense.”  “Self-defense is the right plea when it comes to eating disasters; not insanity.  Self-defense bears no stigma, whereas madness is a shame.” (198)

As you can probably tell,I found The Beauty Myth by Naomi Wolf, although it has some problems and is a bit dated now, to be quite revolutionary and I highly recommend it.  Probably my biggest critique would be is that it doesn’t come close to proposing a solution to any of the huge problems-at least none that I can remember.  However, it does an excellent job at raising awareness, which in my opinion, is at least fifty percent of the solution right there.  The best thing that we can do to smash the patriarchy is to make people aware that there is a patriarchy and that it needs to be smashed in the first place.  So many women and men are still unaware of just how big the problem is.  Learning the depth of the problem is a lifelong journey and I believe so is learning how to help heal our suffering society and our own suffering hearts.

I will leave you with this: “Whatever is deeply, essentially female-the life in a woman’s expression, the feel of her flesh, the shape of her breasts, the transformations after childbirth of her skin-is being reclassified as ugly, and ugliness as disease. These qualities are about an intensification of female power, which explains why they are being recast as a diminution of power.” (232)

Hunger is not power.  The ability to give life, to nurture, to heal, to care, to demand, to work zealously, to live with passion is to live with power.
Posted by K.C. Jones at 2:02 PM