I  absolutely love doing the National Alliance of Mental Illness's (NAMI) In Our Own Voice (IOOV) presentations!  Sharing my positive story, positive energy, and message of hope for a better life despite having severe mental illness really feeds my soul and gives me great energy.  I am very excited as I will now do IOOV presentations at a psych inpatient hospital on a regular basis now.  Besides sharing my story of hope to the clients and I getting energized in return, I also think that we-my IOOV partner and I-give the clients validation, humanity, and extra respect just by talking to them as equals, as fellow consumers who have struggled and who still struggle with mental illness from time to time, as opposed to the staff who mean well and probably do a lot of good, but will always represent an uneasy power dynamic.

I already did my first IOOV presentation yesterday and since it had been a while since I had presented one, I ended up modifying some of the sections quite a bit-I think it is really important to periodically think of your story anew and how it will relate to your audience and to be willing to revise.  Whenever I heavily revise my presentation I post it here, in the hope that some of you will be able to learn, relate to it, and find hope.  Also, if you like the way my story is told and formatted and think this presentation would be a good fit for your organization, please feel free to contact me!  Because the presentation when written out is a little long, I am going to do it in installments-here is part I:


I have had many diagnoses over the years, but in 2011 I was diagnosed with Borderline Personality Disorder and severe anxiety, which covered most of the previous symptoms.  Fortunately, I can now say I am in recovery from it, but first I went through some pretty rotten days.  BPD looks different for everyone, as it is a combination of at least 5 out of 9 symptoms, so I will just describe what my experience was like, in the hopes that some of you will be able to relate.  I first started having suicidal thoughts as a teenager, right around the time I went through puberty.  I also started restricting my food and becoming obsessive about calories and fat grams.   I became this way, at least partly because there was a lot of stress going on at my home and controlling what I ate made me feel like I was in control of at least one part of my life, but that was only an illusion and twice during college I was hospitalized in an eating disorders unit.  During my first year of college is when my mental illness really escalated.  I was constantly afraid of being abandoned and would manipulate people in the hopes that they would continue to take care of me.  I had no clear identity.  I had to hang around close friends all the time and follow their interests, and follow what they said.  I was afraid to voice an opposing opinion.  My self-image changed depending on who I was hanging out with.  I had no clear boundaries and would let people walk all over me and so I had low self-esteem and was depressed.  (Depression, for me, is having absolutely no energy, not wanting to be with people, and not wanting to eat-basically, not wanting to exist.  My family and I used to think that I had some weird kind of learning disorder because I couldn’t clean my room – we seriously thought that I was incapable, but then my antidepressants kicked in and so imagine our surprise when we realize that I had just been depressed all along – that, to me, proves just how powerful depression really is-it can make you think that you are totally incapable of certain tasks.)  I had really bad all or nothing thinking concerning other people where I would idolize someone one minute and then absolutely hate them the next.  I was impulsive and I would self-harm as a way to cope with my strong emotions.  I had moods that would wildly go up and down, depending on the moods of the people around me and these moods would cause me to go from feeling extremely productive and euphoric to almost suicidal and extremely dejected.   Sometimes I felt empty or extremely paranoid-I was certain that everyone hated me and was talking about me behind my back.  To cope, I would often disassociate, which is when my mind separated from my body and everything just went blank. Depression, anxiety and BPD was so bad in college that I had to change my major from vocal performance to English, because I went through a period of time where I couldn’t sing or play an instrument without crying and I stopped doing something that I had dearly loved all my life for several years. I still deal with anxiety, although I am much better handling it than I used to be-before, my anxiety would put me in a panic where all I could think of was to kill myself and I would disassociate and hallucinate (see and hear scary things that I knew were not really there, but were scary nonetheless) and could not at the time yet believe that the moment would pass, which just made the anxiety worse and was a large reason for the majority of my problems before I discovered Dialectical Behavioral Therapy. 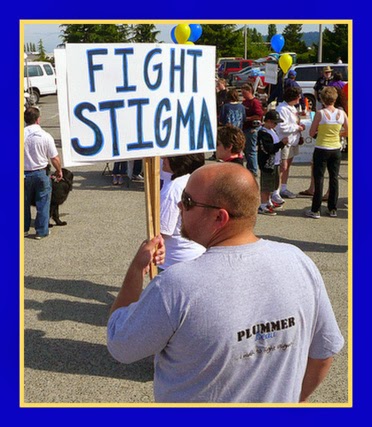 This is a Creative Commons picture taken by Chuck Taylor at a NAMI Walks event in Seattle.

My next post will be about how I came to accept my illnesses and my treatment, both past and present.
Posted by K.C. Jones at 1:25 AM