Genesis And the Rise of Civilization - A Book Review

I am proud to say that I have been meditating on the Bible two days in a row when I have been really anxious and I must say, it has really helped!  For my non-believer friends, I think meditating on any inspirational book would work for you. (Or music or piece of art or nature...)  I read until I feel positively inspired in some way and then I pause and write down those thoughts.  Since I just reviewed the book, His Desire is For Me, on the Song of Songs, I thought I would start there!  I must admit I was feeling really negative and depressed today, but after reading Chapter 2 of the Song of Songs this is what I wrote:


My Godde has many things to show me-he is not finished with me yet. I am looking at the small picture problems and not rejoicing in the big picture victories.

In my last post I talked about viewing my Godde as my life-partner, rather than as my king:


my Godde was there as my life-giving partner, not my dominating Lord or King, but soul-sustaining, hope-giving Spirit and Friend.


Most churches compromise and say that Godde and Jesus is your King AND your friend, but I think that is ridiculous!  King and lord language is distancing language, for everyone knows that one cannot be friends with a king-kings are always power grabbers-they are above even the one percent!  I do not believe that Godde has all the power and so I do not give Her the title of King or Queen.  I really prefer the idea of Godde and I being in a partnership, a give and take relationship, and this is actually supported in the Bible-Godde made covenant after covenant with Her people in the Bible.  A covenant is a promise based on relationship, based on trust-and Godde held Her promises past the point when Her people did - this is NOT something a king would do, but something rather a friend or lover would.

This is why I liked j. snodgrass' book, Genesis: The Rise of Civilization, so much: it posited that Godde is really on the side of the tribal rebels than on the kings.  Snodgrass thinks that the book of Genesis is really about the struggle between the competition between feudalism (civilization) and the more carefree nomads.  Patriarchal history has made it seem like God is on the side of the monarchy and following rules and order, but Snodgrass does not think so.  He sees the loners as being the ones more willing to go out on a limb and follow the one true God, while those who are more well-known as becoming complacent and fitting in with society, ultimately exploiting the poor.  It is a funny book with quotes from some of my favorite science-fiction authors and I think it would be an entertaining read for anyone who is interested in mythology, as Snodgrass brings in symbolism and stories from many cultures.  I agree with how he reads the Bible:

I read the Bible as a thousand-year-old debate about the nature of God. There are multiple sides to this discussion, each with its own ideas about what God wants from humanity [...] and the debate is additionally complicated because there are two Gods in the Old Testament: a god of subjugation and a god of liberation. Obviously these gods will expect different behaviors from us.

He had also had this to say: 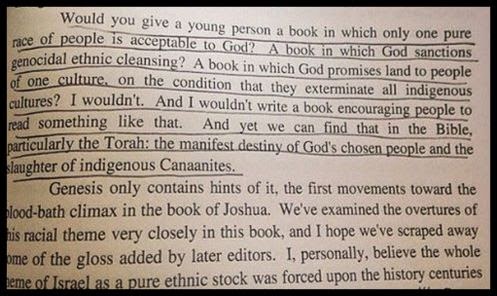 It is harsh, but true and I found it refreshing to read someone who also questions what they read and does not gloss over the parts that are problematic.  Snodgrass has written other books and I would like to read them too!  Also, besides writing theology, he writes comedic biblical plays and comics! 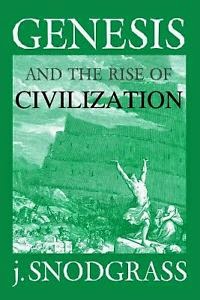