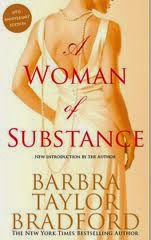 A Woman of Substance by Barbara Taylor Bradford
This is an epic book about a woman who rises out of poverty and becomes one of the world’s most powerful business women.  I like the premise, but the editor could have removed about two hundred pages and we would still be fine.  Bradford belongs to a school of writers who thinks that everything has to be described, including every article of clothing and every piece of furniture, which does not leave much to the imagination.  Still, I liked the book fairly well until a sex scene where the male lover is constantly being described as not being able to help himself.  Now, I know that this book was written in the 1970s and was describing a time even older than that (approx. 1920’s?), but still that kind of language really bugs me.  Saying that one cannot help themselves makes the act sound suspiciously close to rape and it certainly does not sound romantic.  At that point, I was too disgusted to want to finish the book.  The book is considered a modern classic, but I really do not think it is worthy of that title-I guess my standards are too high. 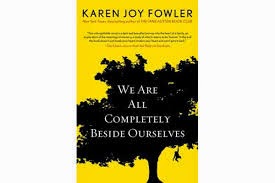 We Are All Completely Beside Ourselves by Karen Joy Fowler – Fortunately, this book is absolutely lovely.  This is a wonderfully written book, but I must warn you that although it ends on a positive note, it will still break your heart.  It is a story about animal cruelty and how we thoughtlessly use animals for testing and consumer products without thinking of the consequences.  Ultimately, it is about what happens when we do not think through our actions involving animals.  It also asks us to reexamine our assumptions about family - are family members just people or can an animal move past the role of pet and become another true brother or sister?  Fowler makes the case that at least for orangutans they can.  This book tore my heart out and yet I am very glad I read it.  It moved me outside of myself and caused me to grow in compassion towards all living creatures. 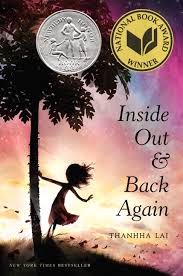 Inside Out and Back Again by Thanhha Lai – This is the book I read for my young adult book club.  It is a quick read and very smartly written, having won the Newbery Book Award and the National Book Award.  I recommend it.  It is a series of poems based on the author’s own experiences of being a refugee from Vietnam right after the Vietnam War, moving to a small town in Alabama, learning English, going to a new school, and dealing with the death of her father.  The poems are charming and I think it would be relatable to any kid who has moved to a new school or culture and certainly to anyone whom English is a second language.  I enjoyed the book and my only complaint is that it is not very memorable.  While I do like to read books over and over again, I would like to be able to remember how it ends a few weeks after reading it and I don’t know if I would have awarded it those awards because of that. 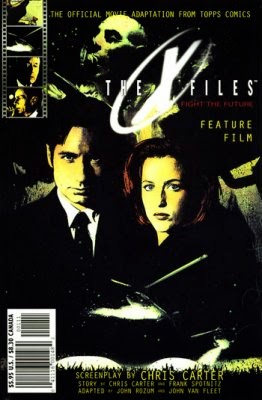 X-Files Fight the Future Graphic Novel – This adaptation of the first X-Files movie was a surprise, because the classification as a graphic novel is not quite right - it’s more like a novel with pictures and that disappointed me.  I thought it was well written and I enjoyed being reminded of the movie, but I would have liked the story to have been told through the pictures, like a true graphic novel, instead of just having lots of illustrations to go with the writing.  The pictures were very dark, adding a nice level of mystery to the story.  I enjoyed it, but I would have enjoyed it more as a true graphic novel. 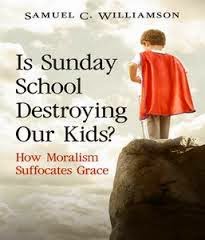 Is Sunday School Destroying Our Kids?: How Moralism Suffocates Grace By Sam Williamson – This was a speakeasy book and I am glad it was short because it was awful.  The funny thing is that I do not totally disagree with his premise-I do think that we water the scriptures down and that more emphasis should be on grace and not on acting morally.  In my view, we should also stop focusing so much on piety because there is more important work to do social justice wise.  The book suffers from the same fate as Inside Out and Back Again in that it is also not memorable.  It is written too simply and is filled with trite sayings that make me cringe.  I came away from the book thinking that the author is not a very good writer with not really all that much to say -nothing new, at least.  I always feel badly when I give a bad review, but do it I must-I do not recommend this book. 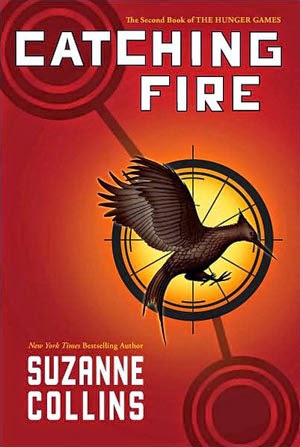 Catching Fire by Suzanne Collins – Fabulous!  Katniss has unknowingly become the most important person in the revolution.  Her contestants in the hunger games beautifully sacrifice themselves so that she and Peeta will live, which reminds us that when it comes to causes some people really are more important than others, at least more important in the public eye.  While most people are pawns in the hunger games, Katniss is horrified when she discovers that she is a pawn in the revolution, as she had been manipulated to stay alive, which asks, is sometimes manipulating people justified?  Are all people equal or when it comes to social justice, are the more visible people more worth keeping alive?  From a moral standpoint, the answer is no, but from a logical standpoint, the answer is yes.  I felt sort of sorry for her, as she is too busy trying to survive to ever really be able to think about what her complicated feelings towards Peeta and Gail mean.  I also really love that Collins has made a female character who absolutely does not want children due to her circumstances.  I do not want children, partly because I just don’t, but also partly for many logical reasons too, like not wanting to pass my mental disorders to another person, not thinking that I have the right personality to be a mother, knowing that I become overstimulated by loud noise way too easily, and not having enough money.  It’s nice to read about a character that thinks about motherhood in a practical way too.

Link Love:
RH Reality Check – Andrea Grimes -
Losing My Lege: GOP Lawmaker Wants to Appoint Lawyers for DeadWomen’s Fetuses
Farah Diaz-Tello, staff attorney for National Advocates for Pregnant Women, told me that to her, it sounded like Krause’s proposal “is not about a voice for fetuses; it is about inserting the state” into a private medical decision.

RH Reality Check by Zoe Greenburg
ReportFinds ‘Shockingly Substandard’ Reproductive Health Care in New York Prisons
The population of women in prison has risen sharply over the past three decades. The United States currently incarcerates more women per capita than any other country in the world, according to the report. As more and more women have been locked up, prisons have become one of the largest providers of reproductive health care in the nation.

A ConversationWith Karen Joy Fowler
If we can’t bear to look at what we are doing, then we shouldn’t be doing it. Of course, this precept reaches far beyond our relationship with our fellow animals into our politics, our environmental policies, our wars, and our prisons. A lot of what the animal rights activists do is simply make us look. I’m all in favor of that. […] As children we are encouraged to feel a great sympathy for animals and then expected to cast that off as part of growing up.
Posted by K.C. Jones at 9:33 PM