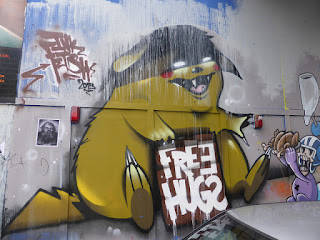 Some "Free Hugs" are creepy.
(Photo a creative commons license, taken by duncan c.)
Posted by K.C. Jones at 10:52 PM No comments:

A Letter To My Younger Self - Conflict Is Not Inherently Bad

quality of life is directly proportional to the delight you can take in discussion. (19, Plato's Podcasts: The Ancients' Guide to Modern Living, Mark Vernon)

I facilitated the creative writing activity at the Peer Support and Wellness Center a few days ago and my prompt was to write a letter to your younger self.  I've posted similar posts here before.  This time, my writing had a specific theme in mind - that conflict is not always bad.  This is a concept that is very hard for me to get, as I have spent my life petrified of causing and being involved in conflict.  Raised voices trigger me and I am quick to feel invalidated and defensive.  I was amazed when talking with a friend the other day when she said that she actually loves conflict and is good at it.  She sees conflict as a positive learning and growing opportunity.  Her point of view strikes me as very healthy, but very hard for me to wrap my head around.  She encouraged me to confront a person who I thought was not treating me very well.  I had been furious with this person for several days and had promised my friend that I would stand up for myself, instead of being passive aggressive.

I was all set.

I was going to set boundaries and be ferocious.

I was also terrified.

I made the call to set up the appointment for a face-to-face encounter.  She, of course, could only speak on the phone.  I went ahead and asked the question I needed to ask before really letting her have it.....

......and she was nice and polite and totally gave me the answer I had wanted.

Once again, my assumptions made an ass out of me.

Immediately after having this conversation I facilitated the creative writing group and so it was with this lesson in mind that I wrote my letter:

It is good to stand up for yourself.  Conflict is not bad and does not have to be scary.  Conflict helps people grow.  You are not a bad person or need to feel guilty if you have to ask questions or advocate for yourself.  Even if you have to cause another person discomfort in order to get your needs met.  You deserve to be happy and to have what is important to you understood.

Remember that more people will try to help you and be receptive to your input and ideas than you will give them credit for.  You live in a world of fear, but the world is far more wonderful than you can comprehend.  Spend more of your time basking in the sun of love than in the shadow of fear.

Be strong knowing who you are.  You are a person uniquely made and qualified to help make the world a better place and in order to do a good job you must speak your mind.

Your mind is worth sharing.

Your older yet still learning and growing self. 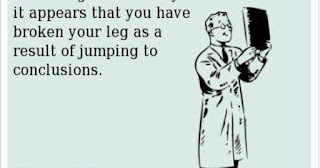 Sight In The Sandstorm Book Review

Sight In The Sandstorm: Jesus In His World And Mine by Ann J. Temkin is the latest speakeasy book that I have recently read. 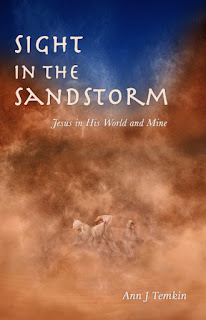 I thoroughly enjoyed this book.  It is easy to read and makes the gospels come alive with the way Temkin expertly weaves together stories from her own life with stories about Jesus and his disciples.  I really liked that Jesus and his followers seemed like real people with real character defects and struggles.  I liked even more that Temkin especially focuses on Jesus' humanity.  She shows him as a person that struggled with confusion and frustration, often exasperated by his followers failure to get what he was trying to say.  He was someone who wanted support and who often failed to get enough.  Since Jesus was human, he was a person that made mistakes and experienced complex emotion.  Temkin gives us insight as to what some of his mistakes and emotions might be.  I appreciate that kind of insight, as I cannot relate to a perfect person as my savior.

My favorite chapter was chapter 17, "On the Hill Beyond Time," which is about Jesus' execution.  Her writing is very effective and really touched me.  I loved how she equates the suffering that Jesus experienced with all the sufferings that people have experienced throughout all time past, present and future.  Often Jesus is portrayed as this superhuman who has no worries at all, but Temkin knows this cannot be so.  Her Jesus sees his mother at the foot of the cross and is consumed with guilt and worry over her.  He feels unable to do anything to comfort her and in reality, he is unable.  He simply has to deal with the pain that he is experiencing right now and receives no comfort from God.  Oddly enough, this image of an uncomforted Jesus gives me much comfort.  If even the son of God felt totally alone and abandoned by God at times, then I can take comfort in knowing in my times of anguish that I am not alone.  Sometimes, for whatever reason, we cannot hear the voice of God, but Jesus' experience proves that God is still there.  Feelings are not facts.  Recovery from borderline personality disorder has taught me that sometimes I cannot trust my intense feelings, but must instead cling to what I believe to be true.

I recommend this book for an insightful, emotional and thought-provoking read.
Posted by K.C. Jones at 12:03 PM No comments: