Evolve with Joy and Love

Today in a coffeeshop I overheard an elderly white man say that he thinks school shootings are happening because kids aren't spanked enough today.  If there was better discipline, then kids would know the difference between right and wrong.

That is a horrible thing to believe and say.

I wanted to say something, but in the end I didn't because I knew it would not have changed his mind.  I think of people like that as dinosaurs on the way to extinction.  It is better to focus on the young people who are changing the system, rather than the people who are stuck in a bygone era.

What do you do after another school shooting?  Another cop called by a racist person?  Another tweet by a dehumanizing president?

It helps when I remind myself that there have always been many horrible tragedies every day since the world began-it's tough now because we are bombarded with the horrible-ness of everything all at once, all the time, if we let it.

I think we have several options: focus on joy and love or focus on fear and pain.  My mantra is to move towards love, not fear, but it's hard when confronted with the awful news so often.

I feel like if I let myself succomb to despair, then I have let evil win.  I don't want to grow up to be a bitter person who thinks violence is the answer.

The other day, I thought to myself, "the world is so bad - everyone should have a "mental illness."  Mental illness diagnosis are rising, at least partly, because people don't know how to handle our society's constant stream of negativity.  My solution is to get out of the stream.

Last weekend, I attended an LGBT schi-fi convention called OutlantaCon.  It was a lot of fun - I even bought myself a unicorn horn! 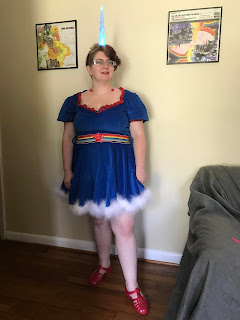 Because it brings me joy!

I attended a panel on activism at the conference because I wanted to meet Park Cannon - the representative for Georgia district 58 - a young, queer, woman of color who is making a difference.  It is important to take notice of those who are upsetting the system - we need to follow them instead of the negativity on the news.

Of course, we don't want to be ignorant, but my wise mind tells me that too much news watching is a recipe for bitterness instead of loveliness.

At the convention, I got to meet people who make their living by having fun and bringing people joy. Stiletto, A drag queen with backup singer puppets; a steampunk couple that makes beautiful clothes; people singing songs from my favorite musicals accompanied on their ukuleles (the ukulele seems to be the "in" nerd convention instrument right now); a ridiculous entertainer named Magnus Moxie, who claims to be the cosmetologist on The Enterprise with an endless supply of horrible puns. 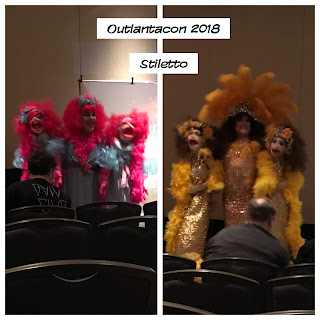 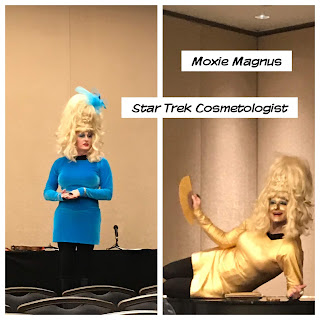 That's what I love about conventions - it's people together who share a passion and passions bring us joy.  It's why I will never give up ice cream.

I want to focus on the Park Cannons and Moxie Magnuses of this world, rather the ignorant, white dinosaurs.  I ate vanilla cinnamon gelato and attended a drumming event (not at the same time) tonight.  Right now, I've got a peaceful cat sleeping in between my feet. Right now, I have everything I need.

Sadness is a valid emotion, but so is joy.  We need to honor both to evolve.  When I feel the urge to detach and ponder evil, I must instead connect with others and move towards love instead.  To move towards joy is to live - to move towards fear is to die: let us evolve and bring new life to this world. 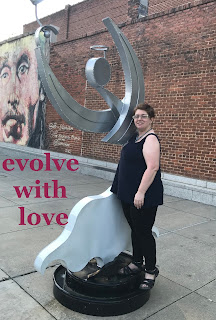 (at the Decatur Square on my birthday)

I have several events coming up, including an open house for The Hearing Voices Network.  Click on the link for more info. 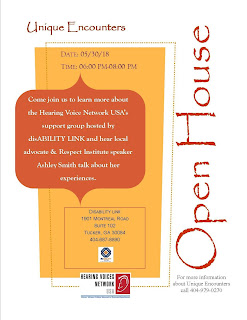