A Wise Woman Must Be Heard

Sheba passed through all the tribes of Israel to Abel Beth Maakah and through the entire region of the Bikrites,[b] who gathered together and followed him. 15 All the troops with Joab came and besieged Sheba in Abel Beth Maakah. They built a siege ramp up to the city, and it stood against the outer fortifications. While they were battering the wall to bring it down,16 a wise woman called from the city, “Listen! Listen! Tell Joab to come here so I can speak to him.” 17 He went toward her, and she asked, “Are you Joab?”
“I am,” he answered.
She said, “Listen to what your servant has to say.”
“I’m listening,” he said.
18 She continued, “Long ago they used to say, ‘Get your answer at Abel,’ and that settled it. 19 We are the peaceful and faithful in Israel. You are trying to destroy a city that is a mother in Israel. Why do you want to swallow up the Lord’s inheritance?”
20 “Far be it from me!” Joab replied, “Far be it from me to swallow up or destroy! 21 That is not the case. A man named Sheba son of Bikri, from the hill country of Ephraim, has lifted up his hand against the king, against David. Hand over this one man, and I’ll withdraw from the city.”
The woman said to Joab, “His head will be thrown to you from the wall.”
22 Then the woman went to all the people with her wise advice, and they cut off the head of Sheba son of Bikri and threw it to Joab. So he sounded the trumpet, and his men dispersed from the city, each returning to his home. And Joab went back to the king in Jerusalem.

I think this is a powerful story about a woman saving her town and yet I doubt I will ever hear about it in church or see it in the lectionary, because it is so violent.  Popular sentiment says that women are not supposed to be violent.  We're not supposed to be aggressive, opinionated, or even just assertive.  We aren't supposed to take initiative or save the day.  We're supposed to be pretty, empty, weak victims.  It helps me to hear stories about wise women like this.  By the way, the Greek word for wisdom is the feminine word Sophia, which appears throughout the Bible.  When the Bible says that "The Word" was with God in the beginning, it really means Sophia Wisdom.  Feminine wisdom was with God always and She is with us still, but our culture tries to convince us not to listen to Her voice.

This "wise woman" did prompt her people to cut off a man's head and this violence is why we will never hear her story in church, but her wise advice stopped Joab and his troops from destroying her city.  The siege ramp was made and the troops were in the process of battering the city wall down when this woman took initiative and saved the day.  What is also striking to me is that the people in her city actually listened to her and followed her advice, so she must have been a very respected woman.  In my opinion, she should be used as an example that girls and women do not have to always be the victim.  We can make the first move and we can do what is necessary to preserve what is important to us.  We are worthy of respect and of having an attentive audience.  I propose that we honor this unsung, unnamed woman by promising to listen, respect, and speak up for the Sophia voice inside each of us.  She will help us preserve that which is most dear and to live our lives with wisdom and dignity. 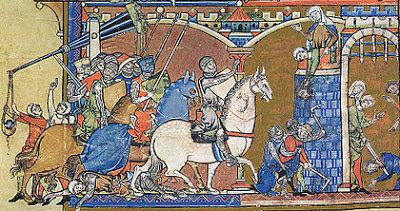 (picture from The Morgan Bible)

Dances with Fat – Diane Wants to Slap Me
it helps me to remember that the rights to life, liberty, and the pursuit of happiness are inalienable, not contingent.  They are not based on size, health, habits, or the approval of others.  I don’t need to prove anything to anybody in order to claim these rights for myself.  They are absolutely mine and nobody has the right to take them away.

One comment on “A Wise Woman Must Be Heard”