“The story doesn’t end with Jesus. It continues in the lives of those who believe in him.  (The Message Bible, 240)

How do you recognize a panic attack or being triggered?  How can one cope with hearing or seeing scary things?  I had an experience the other day that I felt compelled to write down afterwards and share.  So many people ask me questions about recognizing panic attacks, being triggered, coping with hearing or seeing things that I thought some people might find how I handled a recent intense experience calmly interesting.  (BTW, these are the kind of things we sometimes talk about at a Hearing Voices Network group.)
I was sitting on the couch reveling in my new found peace and coloring.  All of a sudden, I felt a great sense of clarity. “It doesn’t matter what I do,” I thought.  “Life really is like in Ecclesiates, there is nothing new under the sun - all is vanity of vanities.  The only thing that really matters is being kind  - everything else is just icing on the cake.”  I wanted to run and tell everyone,
“Stop worrying so much.  Stop trying to be perfect-the only thing that matters is being kind! Seriously, that’s it!”
My whole life I have been an incredibly morbid person - in the past, I had trouble setting long range goals because the awareness that nothing is certain and that death is always a possibility has always been strong with me.  A lot of people are in denial of death, while I have always been a little too aware.  There are so many things that I want to do but now I know that I do not need to stress over whether they will ever get accomplished or not.  All I can do is my best and as long as I am kind and striving to do the next right thing, then I am following God’s will.
The realization is such a relief.
Getting books published, performing, speeches, art - all of that stuff is nice and important in its way but none of it is as important as just being loving and kind every day.  As long as I keep my goal on sharing God’s loving kindness then everything will work out.  I don’t mean work out as in everything going my way, but that I will be able to accept what happens because I will be in peace.
I wanted to tell people my good news but I was also afraid that people would think that I’m crazy - that this was just another psychotic episode.  Like a self-fulfilling prophecy, I started to get paranoid.  While I knew no one was behind me in the house, I had to turn around several times because I knew Shadow Man was behind me (a figure that comes to me when feeling extremely anxious).  I started feeling more and more fearful as the visions of Shadow Man got worse and worse.  And then I experienced more clarity -
this is the beginning of a panic attack and I need it to end!
So I took my klonapin (normally I try to avoid taking it but the paranoia was serious enough that I felt taking it was the responsible thing to do).  Still, I wondered why was I having all of this anxiety right after a beautiful moment.  I really wanted the clarity to be real, but I feared that this was a bad psychosis naturally following a more positive psychotic state, when I had another light bulb moment:
I was triggered!
During the time I was having the spiritual moment, I was also watching a show where someone was in a mental hospital and had just gotten a shot.  Watching the scene brought back memories in Peachford when I had a similar experience and how scary that was and so the show turned what had been a beautiful moment into a really triggering moment. Once I realized that the paranoia and hallucinations were the result of triggered trauma, I laughed.  (There is a reason why I normally do not read or watch media about mental hospitals or mental illness - it’s just too real for me.)
The great thing about anxiety is that its cure is to simply recognize that one is going through a panic attack or an anxious spell - recognizing it for what it is takes its fearful power away.  Now I knew that I was not going crazy, my earlier spiritual experience was still valid, and that it had only turned sour because of my own internal fear coupled with being triggered.  With this recognition, my panic attack passed, I laughed in relief, and I finished doing the dishes.
Now that I am getting better at deescalating my voices and visions, I think they’re pretty cool (sometimes).  I mean, I do not like the paranoia and the fearful visions but I also feel like I get a richness of life experiences that a lot of people do not.  I think it is pretty amazing how a person can just be casually sitting on the couch and then the next minute be immersed in a spiritual, mystical experience.  Sometimes I wonder if all the prophets simply had schizophrenia.  I imagine another beatitude where Jesus says,

“Blessed are those who are open to new voices and visions, for they shall experience God.”

"Blessed are those in the mental hospital, for they shall have an understanding denied to many.”

“Blessed are those who do not seem blessed, for their ego shall be small.”

Sometimes I worry that I am not as humble or meek as I should be but I feel like in this world where people of unusual experiences are usually put down that my ego and enthusiasm is a type of social justice response.  It certainly is an exercise in vulnerability.  Poor Trump just doesn’t get it at all - he doesn’t want scientists to use the word, “vulnerable” and that to me is the greatest shame of all - if there is one group that is blessed, it is the vulnerable.  Jesus was so vulnerable that he allowed himself to be killed.  He wanted his followers to be vulnerable, like children.  We are not blessed when we inherit money but when we allow ourselves to be so vulnerable that healing amid pain can happen.  Sharing our unusual experiences is a beautiful thing, and believing that only money is true power is a type of delusion in itself. When I see Trump, I see a lot of sadness and I do not see power, except in the most fake way.  Trump is like fool’s gold, but the true riches are found in the people who are open to new truths, even if they walk the Haldol shuffle. 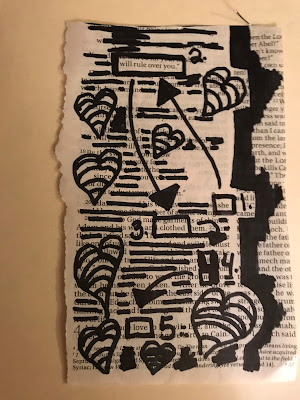 ("She will rule over you clothed in love."  A blackout poem I made recently from Genesis.)

Also, check out my new "teen resources" page - let me know if you would like for me to send it to you as a pdf.

Anxietycoach.com -The Key to Overcoming Panic Attacks
(I have found this article to be really helpful and true.)

Why should I accept a panic attack?Because the more I resist panic, the worse it gets.  The more I develop the habit of acceptance, the more progress I make toward my goal of overcoming panic attacks.

Brene Brown - The Power of Vulnerability

The other thing that they had in common was this: They fully embraced vulnerability. They believed that what made them vulnerable made them beautiful. They didn't talk about vulnerability being comfortable, nor did they really talk about it being excruciating -- as I had heard it earlier in the shame interviewing. They just talked about it being necessary.They talked about the willingness to say, "I love you" first ... the willingness to do something where there are no guarantees ... the willingness to breathe through waiting for the doctor to call after your mammogram. They're willing to invest in a relationship that may or may not work out. They thought this was fundamental.

2 comments on “An Anxious Revelation”