In my last post, I talked about a great realization that I had. Now I am going to talk about another realization that I had a few weeks ago. I had the realization on a Thursday two weeks ago. I know that, because I have my Dialectical Behavioral Therapy (DBT) class every Wednesday night and I believe it was the DBT class that prompted my realization the next day. You see, we had been talking about the concept of radical acceptance. I guess you could say that I was having a lot of trouble "accepting" the idea. Basically, radical acceptance is accepting a painful reality for what it is. It can be enormously helpful, but it is also very hard to do at times. 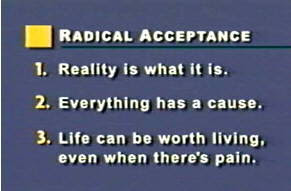 The day after the second week of talking about radical acceptance, I was finally able to apply it to my chronic pain.  I had been doing pretty well in not engaging in suicidal thinking for a while, except when I would have a fibro flare-up.  Then, in an unconscious effort to not feel the pain, I would start obsessing about acting out, usually in the form of some kind of self-harm.  But all this would do for me is increase my anxiety, as I know my job is to resist acting out.  I knew I would not hurt or kill myself, but still I obsessed about it, sending me in a whirlwind of anxiety.  That Thursday something almost magical happened: as my obsessive thoughts and anxiety increased when I started to feel pain, all of a sudden I had an amazing thought-

"What if I just accepted the fact that I am in pain and then dealt with it without all the suicidal thoughts? They don't serve any positive purpose for me anymore. I don't need to obsess about acting out, because I know I am not going to do it anyway! All they do is make me more anxious!"

And with that realization, the obsessive thoughts disappeared.  I had finally accepted reality for what it is and I had come to realize that life is worth living, even when there's pain.  Life lived in reality is really a life worth living.  I had paid attention to my wise mind. 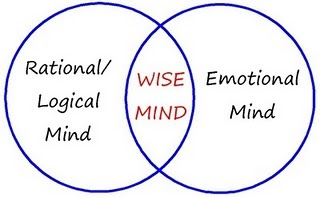 For these past two weeks, my pain has not gone away, but it has diminished.  I believe it is because I am not adding the stress and anxiety that those thoughts produced on top of it.  I have found that when I accept my present, painful reality then it is much easier to do something productive about it, because my mind isn't clouded up with the disorganizing and depressing thoughts.  I'm feeling pain?  Then I need to take some pain medication.  Or maybe I need to rest a while.  Or both.  But I cannot figure out what I need in order to feel better unless I first pay attention to how I am feeling and then simply accept it for what it is.  I don't think that one can hear about the concept of radical acceptance one time and then miraculously be able to do it well.  I think you need to hear and talk about it repeatedly until it starts to make sense.  I know that's how it worked for me and thank Godde it did. 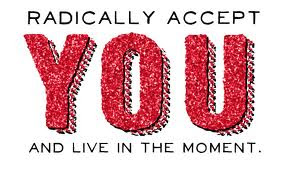 Two from This Ain't Livin'

The hatred of poor people who have cell phones turns the cell phone into a symbol. It’s troubling to see people harassing people in poverty for owning cell phones because of what it implies. It suggests that poor people shouldn’t be trying to find work and find ways to address their poverty, which is effectively what people are saying when they claim that people with cell phones aren’t ‘really’ poor. Furthermore, it indicates that people believe poverty should be socially isolating, that poor people do not have a right to communicate and that the existence of social networks precludes an actual state of poverty. If you’re poor, you shouldn’t have friends or a social life.  […]  Acknowledging that poverty is not something that can necessarily be defined by the possessions people have is critical, and yet many people seem to have serious resistance to the idea. That includes progressives who don’t seem interested in interrogating their own ideas about what poverty looks like and what the lives of poor people involve; it’s present in the sneers implied in comments about homeless people having cell phones or someone ‘claiming’ to be poor and having a laptop.

TO EACH ACCORDING TO THEIR OWN ABILITIES: DISABILITY AND ENVIRONMENTALISM

There’s also a tendency to present ecologically-friendly practices as ‘easy and simple’ but also ‘required if you care about the Earth.’

In fact many of these practices are not easy and simple, and it is disingenuous at best to suggest that they are. Some of them are actually extremely difficult, requiring time, energy, physical strength, and specific cognitive skills. Not everyone has all of these things all the time, and that includes nondisabled people as well as disabled people. By recognising that, we can create an environmental movement that welcomes each according to their own abilities; not just in general, but on a day to day basis

Further, the use of rape (or threatened rape, or other sexual assault) as an experience that turns one into a superhero is so incredibly insulting to the millions of people who have experienced it, it's hard for me to even fathom the callousness, the cruelty, of making it a trope in a videogame.  […]   Rape isn't some weird, exotic threat. It's an everyday threat that affects women disproportionately, whether because we have experienced it, or whether because we live in a culture that is saturated with it.