I have discovered bacon!!!! Bacon is a pretty cheap meat, because if you just use about 4 slices per meal, then you've got enough for around a week's worth of dinners! I have been making a lot of dinners with bacon lately, so you will be seeing a lot of bacony recipes. After two weeks of eating bacon though, I am beginning to get a little tired of it, so I will probably not get it again for a while, but it is nice to think that in these past few weeks, I have thoroughly beaten ED.

And what goes great with bacon? Eggs! I really do not think that I will ever get tired of eggs. Here is a recipe for "Asparagus and Mushroom Quiche" from allrecipes.com. I picked out this recipe, because I had feta cheese, leftover from a salad I had made a few days before this meal for a church potluck. 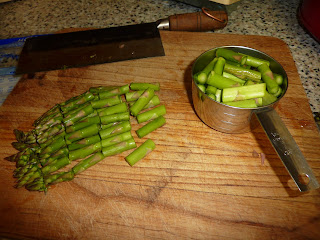 1.Preheat oven to 400 degrees F (200 degrees C).
2.Cook bacon in a large skillet over medium heat until evenly brown and crisp. Drain on paper towels, crumble and set aside.
3.Heat oil in a large skillet over medium-high heat. Add onions; cook and stir until translucent. Reduce the heat to medium and add the mushrooms. Continue cooking until the mushrooms are tender. Set aside. 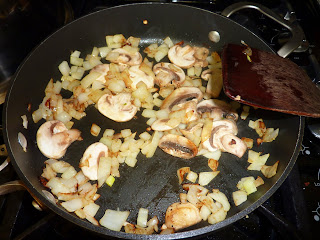 After this, in the original recipe you are told to steam the asparagus in water, but I used the new Ziploc Steam bags and that was much easier.

Place the onion and mushroom mixture, asparagus, and bacon into the bottom of the pie shell. Sprinkle the Cheddar and feta cheeses over the vegetables. In a small bowl, whisk together the eggs, cream, salt, and pepper until smooth. Pour this mixture over the vegetable and cheese filling. 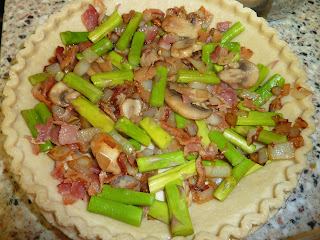 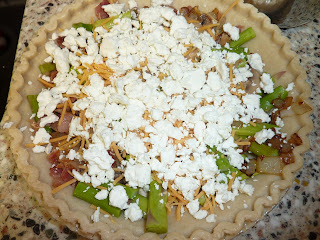 Bake uncovered for 35 to 40 minutes, or until firm and lightly browned on top. Let cool to room temperature before serving. 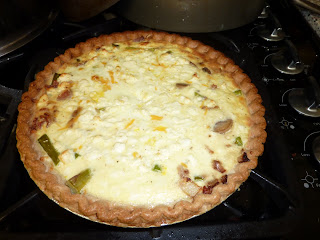 I made this quiche in the morning before work, which is a new coping skill I have discovered. My job is in the afternoon and then I usually have some kind of group to go to a couple of hours later, so instead of rushing around in the little bit of time I have between the two events, I now try to do as much cooking as I can in the morning. This way, I do not exhaust myself and I start out the day feeling productive.

The quiche, by the way, was great. My mom thinks that asparagus have a little too strong taste in something like a quiche and says she would prefer spinach for a green vegetable, but I disagree. I rarely like cooked spinach, as I think it's too slimey. What do you think?