"Body Outlaws: Rewriting the Rules of Beauty and Body Images" - A Book Review

A very important aspect of recovery is learning about your disorder, but I have found most material about eating disorders to be 1) extremely triggering, as they describe in detail the self-loathing thoughts and behavior practiced, and 2) written for someone else, i.e. family, friends, caregivers, therapists, the next door neighbor's dog... which does, at least, explain all the heavy descriptions. But I, as a person in recovery from an eating disorder, want a book that is written to be read by me. I want material that is empowering, that addresses the deeper issues, and that does not remind me of the all the harmful behaviors that I already know I can do myself. Fortunately, I found a fabulous book that is not triggering at my favorite bookstore, Charis Books & More, in Atlanta called, "Body Outlaws: Rewriting the Rules of Beauty and Body Image," 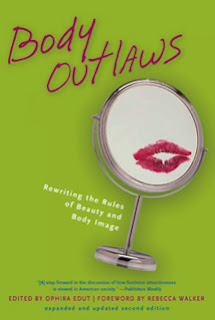 The book is a collection of short essays by different women and a few men about their relationship with their own body. I could not put the book down! While each person chose to center their essay around a different body part or feature that they felt uncomfortable or awkward about, what the book ultimately reenforces is that everybody in this society has body issues and that the biggest thing that we can do as a society, and as feminists, to break the insanity is for us as individuals to start loving and accepting our own body. A radical notion, I know, but oh, so worth it!
Another thing I love about this book is that the writers are a diverse group, from every race, ethnicity, region, religion, and sexual orientation in the United States. This how the book describes the writers, "The writers assembled here celebrate the body in all its splendored shapes, sizes, colors and textures. In doing so, they expand the national dialogue on body image to include race, ethnicity, sexuality and power-issues that, while often overlooked, are intimately linked to how women feel about their bodies. Body Outlaws offers stories by those who have chosen to ignore, subvert or redefine the dominant beauty standard in order to feel at home in their bodies."
I am also glad that one of the writers is Diana Courvant, who is also a transwoman. Her story, "Strip!" is for me, one of the most powerful. In it, she strips in front of a large group of people, while giving a talk about being trans, in order to show that having a body in transition is not "freakish," which sadly, are using her therapists' own words. Trans people are not freaks and neither are those with disabilities, or who are queer, or who are abormally short, tall, have a large nose, or an enormous butt! We are who we are and that is all we should ever have to be, for that is hard enough.