I have a lot to write about! I just spent three glorious days at Dragon Con and it's time to post about last month's books, but first I am going to gush about the cinnamon bun cupcakes I made for my dad's birthday! I need to write about my dad's cupcakes now, so I can concentrate on making my mom philly blackforest stuffed cupcakes for her birthday this Thursday.
First, I am going to present you with two pictures of myself.  I have been struggling with some body image issues after gaining a little weight recently.  Just a week ago I was being melodramatic, because the weight gain was making me feel out of control and I started to glamorize my eating disorder, when I sometimes felt that my obsessive calorie counting kept my life in control.  I say "sometimes," because as my eating disorder got worse, I knew that my life was actually spinning out of control.
So what do I do to combat my feelings of insecurity?  I continue to take pictures of myself and to look at them!  I really have found that taking pictures of myself in the moments when I feel good about myself helps me, because when I look at the picture later I can see the feeling in my face, body posture, and the way that I have taken care of myself.  I know what I look like when I feel bad, depressed, anxious-my hair is greasy, my clothes are sloppy, and my affect is flat-what I need is the awareness of what feeling good and having confidence does to me-it makes me look and feel good!  It gives me a glow!
Here I am in a beautiful shirt I got a few weeks ago at a store called Rainbow. 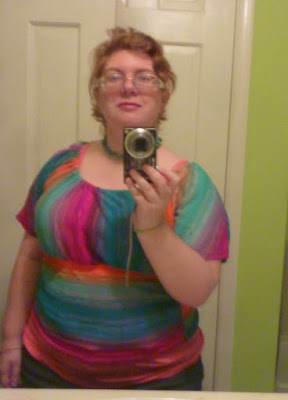 Rainbow was closing, so they were having a clearance sale-bad for the store, but good for me!  My therapist remarked that I got a rainbow shirt from a rainbow store.  Well, you know I'm a sucker for rainbows!  The pink tank top underneath is from Old Navy and I'm wearing a turquoise choker given to me by my father. 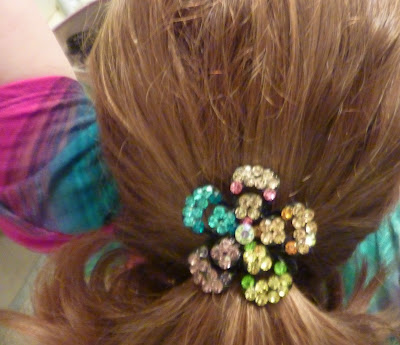 Isn't that sparkly and pretty?  Even my hair had to participate in the rainbow fun!
Now onto the cupcakes!  I always feel good when eating something sweet!  My dad loves cinnamon rolls, but real cinnamon rolls take a long time to make, so I decided to make him quick and easy cinnamon roll cupcakes instead.  I got the recipe from the blog, Hoosier Homemade.
Ingredients
1 box cake Butter or Yellow cake mix

Streusel Topping
1/2 cup brown sugar
2 tablespoons flour
1-2 tablespoons cinnamon
1/2 teaspoon nutmeg
1/4 cup butter, melted
Glaze
1/2 cup powdered sugar
1-2 tablespoons milk
Instructions
1. Prepare cake mix with eggs, buttermilk, and oil.  Set aside.
2.  Combine cinnamon and sugar in a small bowl and set aside.
3.  Combine dry streusel ingredients in a bowl.
4. Melt butter in the microwave.
5. Add a small amount of butter at a time, stirring after each addition, until the mixture is crumbly.  (I accidentally poured in all of the butter at once and then stirred, which produced a sauce instead.  Fortunately, the taste was not affected.)
6. Preheat oven to 350 degrees.
7. Line a muffin tin with cupcake liners.
8. Add about two tablespoons of batter to the liners.
9. Sprinkle with cinnamon sugar mixture. 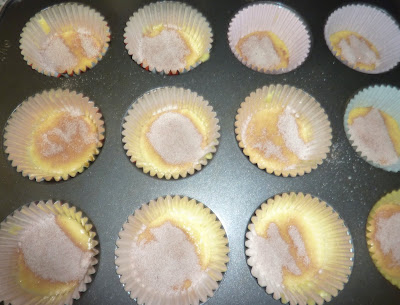 10. Add about two more tablespoons of batter on top.
11. Sprinkle on streusel topping.
12. Bake for about 10-15 minutes or until a toothpick inserted comes out clean. 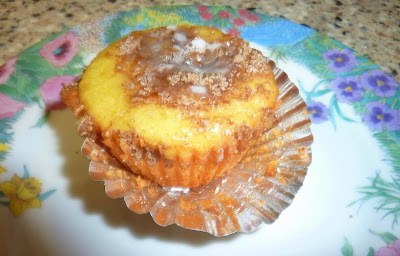 The cupcakes were light and moist and they tasted just like cinnamon rolls.  They practically melted in our mouths! 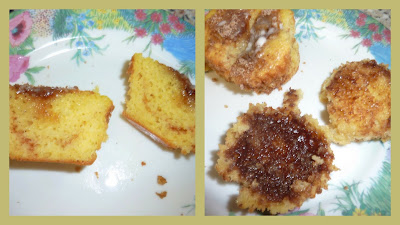 Here are two shots of the inside of the cupcakes: as you can see, they have swirls of cinnamon sugar inside!  Mmmmm-so much sugar!!!!  Pass me some milk please!  My dad loved his birthday present and so did I!
Recommended Links:
A Human Story - Abortion Without Exception
No one type of abortion is more moral than another, by privileging some types of abortions over others we send the message that these abortions are acceptable whereas abortions in other circumstances are not.  Trying to convince conservatives that abortion in some cases is ok, and providing emotive stories and justifications for this simply adds to the idea that in general abortion is not an acceptable choice. At the end of the day, trying to find situations where conservatives may find abortion tolerable does little to advance the movement because the message remains that women’s bodily autonomy is an insufficient reason for abortion to exist.
Salon - My Illegal Abortion
And here we are again. Demonizing women. Limiting birth control. Shrinking access to legal and safe abortion. Daring women to go find the wire. All while men can walk away and be free.
With Love – Dear Apathetic People
I care about the happiness of people around me.  I care about the quality of life of people around me.  Even the people I don't know.  We all bump into each other, at work or around town or on-line.  We're all members of intersecting communities.  If I hear that someone's going around spitting on left-handed people, I don't shrug it off with a careless, "I'm not right-handed, it doesn't affect me, whatever."  The fact remains (in this scenario, although I hope not in actuality) that someone's going around spitting on people.  That's ridiculous and unwarranted and needs to stop.  Why would I not have an opinion on it?  Why would I not speak up about it?  Why would I not commiserate with the people even more directly affected by it than I am?
The Guardian – How do we teach young people what sexual consent really means?
With politicians such as George Galloway and Tony Benn spouting shameful ideas of what consent means (having sex with someone who is asleep is "bad sexual etiquette", not rape, according to Galloway), a worryingly high proportion of the adult public doesn't seem to grasp it either. A survey for Amnesty found 37% of respondents thought a woman was responsible for being raped if she didn't say "no" clearly enough. With attitudes like this, is it any surprise young people may be dangerously confused?