How my cooking life has changed! When I first started cooking, the only thing I would do to my chicken is saute it in a little bit of olive oil. Now I soak it in butter and cover it with nuts and coconut! Life is much sweeter with recovery added into the mix. A week ago I decided to try a recipe that once again covers chicken in coconut, but instead of dunking the chicken in butter, I covered it in yogurt. I really enjoyed this recipe, because it involved getting my hands messy. As I covered the chicken in yogurt and then in the coconut mixture, my hands were also covered and I delighted in the sensations I was feeling. This is another testament to how my cooking life has changed! When I first started cooking, I never would have gotten so physically involved with my food. Food was a scary contaminent, not the delight it is now.

I recommend this dish. It is fun to make and to eat, as the chicken strips resemble coconut biscotti-if there is such a thing-and could probably be finger food, although I did use a knife and fork. The reason why I made it is because I already had all the ingredients, except for the panko. Look for more recipes with panko in the future, as I have a lot left. 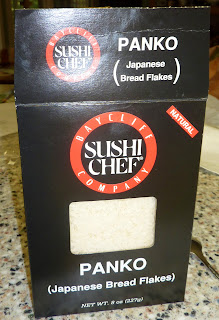 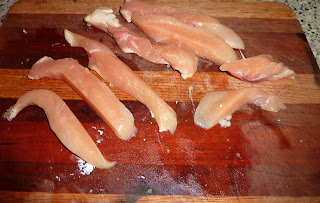 Cut chicken in 1-inch wide strips - I really thoroughly covered my chicken in the yogurt and coconut mixture, so there wasn't much left over after making only about 1/2 pound of chicken strips. Fortunately, it all worked out, since that was exactly the amount needed for three people. If you are planning on using all of your chicken, then I would use more yogurt and more of the mixture.

Preheat oven to 450 degrees. Put yogurt in a small bowl, and set aside. 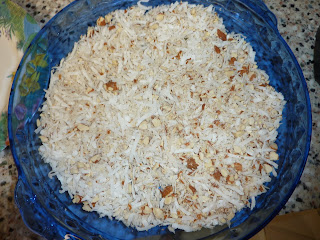 In a shallow pie plate, combine coconut, panko and pecans.

Dip chicken strips in yogurt to cover, then roll in panko mixture. Place strips on an oil-sprayed baking sheet. Spray top of chicken. Bake 15 minutes. Reduce heat to 350, and bake 15 more minutes. Check that coating browns but does not burn. If desired, broil 2 minutes for an even crunchier top. 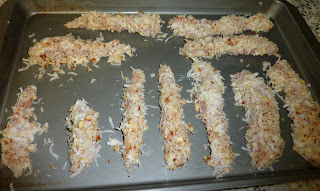 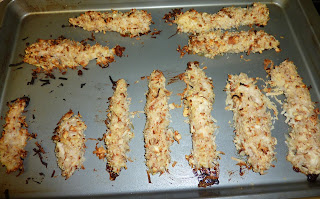 My mom actually likes this recipe better than the coconut cashew chicken that I like to make. I think it's a fun take on chicken fingers and I liked how the coconut was sweet and crunchy, while the yogurt kept the chicken moist. I still have some coconut and a lot of panko left over, so look for recipes containing those ingredients coming soon!