I have a cookbook where every recipe only has four ingredients. I got it years ago when I thought the recipes must be simple enough to not overwhelm me and I finally made a couple of recipes from it a few weeks ago. Unfortunately, both recipes were only so-so. I was left with tons of filo pastry from one of the recipes and so I decided to make up my own recipe and I must say, it was a lot better!

2. Put the frozen spinach in a pot on the stove. Follow the directions on the box for cooking.

3. Coat the bottom of a pan with olive oil and put it on medium heat on the stove.

4. Cook the meat with the garlic.

5. Pour the carton of cream and the cheese in the pot of spinach. 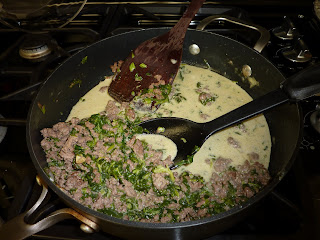 When the meat and the spinach (and the cheese is melted) is cooked, pour the spinach mixture and chopped cilantro into the meat. Sprinkle with salt and pepper, of course.

Here is the hard part!

6. Put a large spoonful of the mixture on top of about five sheets of the filo pastry. 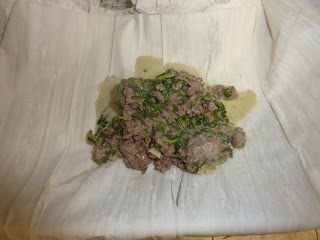 Then wrap it up. This is harder than it sounds, because the heat and the liquid makes the filo pastry a little messy. I ended up using a lot of the pastry, because it would start to get soggy and then I would have put some more down, but it still turned out tasty, so I say don't worry about what you're doing and just go for it. You can seal the pies or leave a little hole, whichever way you like is fine. Dab on some olive oil.

7. I would do the above step on whatever pan you're using to bake them on-then you don't have to figure out how to move their soggy asses. I used a glass casserole sheet. Bake for about 15 minutes. 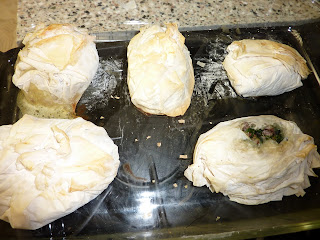 8. There will be leftover mixture-pour this over the whole pastry and enjoy!

This was a hard one for me, as I used both cream and beef-two ingredients that I very rarely use, because the fat content has always scared me. BUT it's a meal that has your carbohydrates, protein, veggies, fat, and dairy all in one dish, so it's actually pretty healthy and certainly a complete meal. It's really filling and very satisfying. 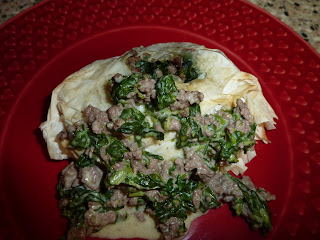