"It is not mean to enforce firm boundaries; I respect myself." ~ Myself

It is rude to talk about weight and dieting at the dinner table.  I know that that is not how the commercials see it, but they are trying to sell you a product-they do not actually care about the well-being of your body or soul and they certainly do not care if the behavior they promote will make you popular.  The only people who appreciate diet talk at the table (or really anywhere) are those who are dieting themselves. I DO NOT appreciate it when people talk on and on about how they hate their body and what they are doing to change it in my presence, especially while I am eating-it triggers me and annoys me.

Fortunately, people do not talk this way in front of me very often-I pick my close friends very carefully.  However, it still does happen from time to time, just like it did a few weeks ago-in the past, how I would have dealt with it would have been to try to make a side conversation with someone else in order to try to ignore the harmful dieting conversation, but I was glad to note this time that I have now outgrown that tactic and have become an even better boundary maker - I simply firmly addressed the whole group and said, that since we were all in recovery (which we were) that I thought it would be best if we kept the conversation away from dieting and food talk, as that might bring up issues for some people.  The offending member got the message and said she had no idea that she might be triggering someone.  I reassured her that we were not mad at her, but that there were better topics for us to talk about-everyone else gave me extremely grateful looks.  We did talk about other more neutral topics for the rest of the night and we ended up having a lot of fun.

Later that evening, another friend pulled me aside and praised me for being so direct.  She said that she had been trying to change the subject for a long time and was getting desperate, especially since she had brought a friend who had recently come out of treatment for an eating disorder.  Later that particular person thanked me for changing the subject.  That obsessive dieting topic just had been no good for anybody.

And yes, we were all of us, a group in recovery from eating disorders, so you might say our aversion to diet talk is unique, but I really do not think it is.  I know that if one is dieting that it is tempting to talk about everything that one is doing with everybody, but I sincerely ask to keep it to one's self or at least to talk only to one's dieting group.  It is hard for anyone to enjoy their food when they are constantly being told how many calories it has or how long they should exercise after eating it.  Life is full of wonderful and varied experiences, most of which have nothing to do with whether one is fat or not.  Talk about those experiences - just this last weekend, I attended my book club at the cute Sugar Hill Bakery, took pictures at the Little Five Points Halloween Parade, and did a successful In Our Own Voice presentation for a NAMI family to family class.   If one does not have anything to talk about besides dieting, then one does not have a fitness problem, but a life experience problem.

I must say, I was and am really proud to see how far I have come in setting boundaries.  There was a time when I would have suffered in silence.  I would have quietly fumed and let the offending woman get away with ruining my happiness when all I had to do was to firmly set some boundaries.  I was not mean; I was just firm and there is a big difference, which I did not used to understand.  Understanding that I now have the ability to set my own boundaries in a way that people will listen is empowering- I am no longer a victim, but in charge of my own happiness.

I wish the same for all of you and I believe you can do it too.

Now for your cute moment of the day from the Halloween parade: 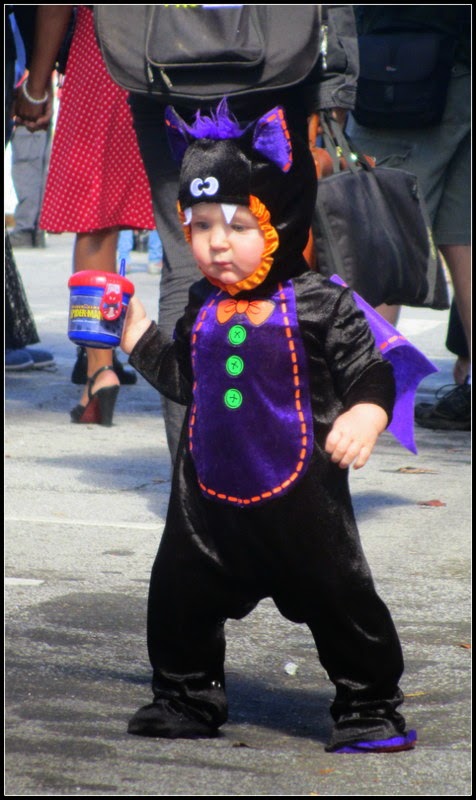