Here is my last Speakeasy book review for a while: 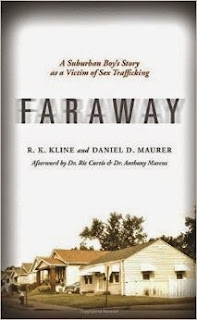 Faraway: A Suburban Boy's Story as a Victim of Sex Trafficking by R.K. Kline and Daniel D. Maurer  - I must say, I was a little wary of reading a book about sex trafficking, but I was pleasantly surprised.  The book is a fast read and actually enjoyable, although tragic.  I would NOT recommend finishing reading it at your psychiatrist's office like I did, as you will have to quickly dry your tears.

We first saw Daniel D. Maurer's work in Sobriety, which I thoroughly enjoyed, and he expertly makes R.K. Kline's important story engaging.  Kline's story is important because it highlights how common sex trafficking is in suburbia and for boys.  It is a misconception that all sex trafficking victims are women, but it is women and girls who get the most attention because of homophobia and misogyny.

Homophobia is the real villain in this book.  From an early age, Kline knew that it was not okay to be out as gay.  His desperation for intimacy and validation from other men was part of what made him such an easy target for the sex trade.  The knowledge that he could not tell anyone of what was happening for fear of being outed made the situation that much worse.

It is sad to note that the place that put young Kline in danger also provided him with his most real and faithful friends.  Through shared adversity, Kine found friends that acted as surrogate family and protectors.  The place that showed him what true friendship and validation is also ended up being the thing that destroys his and his friends' lives.  Now Kline lives with PTSD and wants people to know more about the complex issues surrounding male sex trafficking.  I was very glad for the afterward by Drs. Anthony Marcus and Ric Curtis that detailed relevant research about today's attitudes and issues surrounding teenage sex trafficking.

Faraway is a sobering book that will shock and sadden you and yet it is very readable.  I recommend it for parents and activists alike.  You can also follow Daniel Maurer on facebook and on twitter.

If you can find something positive in each day, however small, it starts a positive cycle. It gradually builds up so that you’re encouraged and reminded to keep looking – and when times are particularly hard, the stuff you’ve written down is your evidence against the accusing voice telling you you’re not good enough and that nothing good ever happens

CNN - 'Alone time' is really good for you

Our brains need to rest and recharge in order to function as well as we want them to. So even if you're not an introvert, alone time is still important for processing and reflecting.

3 comments on “Faraway - A Book Review”