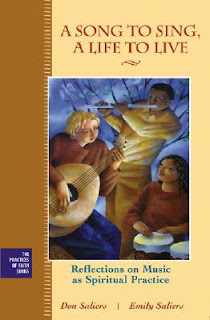 A Song to Sing, A Life to Live: Reflections on Music as Spiritual Practice by Don and Emily Saliers
I was very excited to read this book, as Emily Saliers is one of the musicians in one of my all-time favorite musical groups-The Indigo Girls.  It's a good read, but I was a little disappointed, as I thought it would have specific musical activities that could be used as a spiritual practice, which I thought would be fun to try, but it did not.  The book is basically about listening to all kinds of music in a non-judgmental manner and in finding instances of the Sacred in both secular and non-secular music.  I already find spiritual inspiration in a lot of non-secular music, so most of the message of the book was not new to me.  Emily calls her music "Saturday night music," because it is considered secular, but I have always had trouble with that label for the Indigo Girls.  Most of the time their lyrics are so meaningful to me that I feel more connected to the Divine than I do to many of the popular Christian songs with repetitive and unimaginative words.  The Indigo Girls' songs often have religious overtones and I have often wondered if they are considered secular, because they are two open lesbian singers.  Consider the lyrics to "Everything in Its Own Time," an Indigo Girls' song that is often referenced to in the book:

I especially love the phrase, "What was once your pain, will be your home."  I'm sorry, Emily, but your music is not secular, to me!

The chapter that taught me the most was chapter six, Music Divides Us, because it talks about not letting  your personal preferences divide you in your relationships with other people.  Emily says on page 103 about some people's extreme distaste for rap music,

"But whenever someone is borderline vitriolic about not liking music, I think there is something deeper going on than simply taste.  When people say, "I hate that music," they are really saying, "I hate that culture."

That quote really shook me up, as I used to be one of the ones who was "borderline vitriolic" about not liking that particular type of music.   I held onto the images of misogynistic rap that caught my attention, but I never looked deeper for proof that there may be other songs with redeeming value and so I slighted a whole culture.  By examining my bias, I feel I am now freer to explore other genres of music that I would have previously overlooked.  And more importantly, I am freer to appreciate other cultures and be a friend to others.

I enjoyed this book, because it gave me an insight into the mind of Emily Saliers and her father, but I wish that it had had specific musical ideas to practice that might help bring me closer to Godde.  Perhaps one day I can come up with some of my own!  One day I will also have to read this book again, as I read it in the hospital when my mind was still very spacey and I often had trouble concentrating.  I'm sure I would get a lot out of reading it at least one more time.

Dances with Fat – But What Do You Know?

If we were making health decisions based on evidence we would have long ago suspended the practice of recommending dieting on the basis that there is no evidence that would lead us to believe that it is possible for most people and there is evidence to suggest that it may be dangerous. One of the reasons that dieting continues to be recommended by healthcare “professionals” who should know better is that they are confusing what they think for what they know.  That’s dangerous, and for those who get paid to sell weight loss it borders on perpetrating a fraud.

Free sexual expression allows us to feel fully human. And anything that helps us colonized peoples—Black, Brown, Indigenous—to know how fully human we are is dangerous. That is why we live in a world hell-bent on regulating our expressions of sexuality.

Womanist Musings - Are Black Students Better Off with Black Teachers?

The Brown vs. Board of Education Supreme Court decision brought an end to segregation in schools, and for the first time, Black students were exposed to White teachers.  This has not necessarily been positive for Black children.  The history that is taught in schools is framed through a lens of White supremacy, with additives like Black History Month being thrown to mask enormous inequalities in education. Today’s students are forced to learn the oppressor’s truth by a white supremacist educational system that presents heavy-handed biases into history, language, and even the arts.

These last two are about victim blaming:
Shakesville – Rape Culture and Bad Math

When I was about seven or eight, I sort of obliquely come into contact with the idea that there are people who like to lure children away to hurt them. I didn't really understand what that meant, but I knew it was bad, and I knew, somehow even at that young age, that it was somehow my responsibility to prevent myself from falling into the grips of a predator. The rape culture does start its indoctrination early.

Why are we teaching our kids how to avoid being bullied and to have sympathy for bullies, instead of teaching them how not to be a bully?