Getting Used To My Calling

“For the master’s tools will never dismantle the master’s house. They may allow us to temporarily beat him at his own game, but they will never enable us to bring about genuine change. Racism and homophobia are real conditions of all our lives in this place and time. I urge each one of us here to reach down into that deep place of knowledge inside herself and touch that terror and loathing of any difference that lives here. See whose face it wears. Then the personal as the political can begin to illuminate all our choices.” ― Audre Lorde (Sister Outsider)

I have been practicing with the Rise Theater lately and it has brought up memories of old career goals and passions.  Here is a reworking of a long post I wrote on FaceBook a few days ago:

*****
Today I briefly thought that maybe I should go back to school and finish my music therapy degree and then I thought no, I should just look for nursing home activity coordinator jobs - I'm already qualified and it's my passion.
And then reality hit.
It is so incredibly frustrating to be good at many things but know that the stress and energy involved would most likely derail me. Some people would probably say that I'm being defeatist but at some point you have to admit that not everything you are good at is a viable option as a career because of factors outside your control. It seems that if I can be good at many different things but can't use them to make enough money to live on because of my need for lower stress, then something is wrong.
I don't think God gave us talents for them to be wasted and that it is immoral to base a system on human production.
We are not products, we are not machines.
We all have inherent worth as human beings, whether or not the 1% thinks we have.
I've been writing a lot more lately as I am trying to get used to the idea that writing and providing peer support really are my callings. Writing heals my soul and I know I am good at it and if I could ever finish a writing project, then I think it could eventually be lucrative. The same with providing peer support, as long as the hours are not too many. Of course, if I did make enough money, then that would mean that I would eventually have to give up Medicare, which would be fine if the country's healthcare industry was not in shambles. Unfortunately, there is no way I could trust getting off of disability in our current political climate and that is immoral too.
Figuring out how to afford my medication and therapy shouldn't be a full time job, but it is.
What we really need is a system that does not view humans as money making machines.
I do believe with all of my heart that powerful writing can create powerful change and I am glad that I spent my time at the mental hospital reading Audre Lorde even if it did mean that I called out the poor hospital workers whenever they said something stupid. I called them out a lot. It gives me a lot of pleasure now to think of it.
*laughs*
That's the power of the written word. Well written literature gives confidence to small people, both in stature and in the eyes of society. 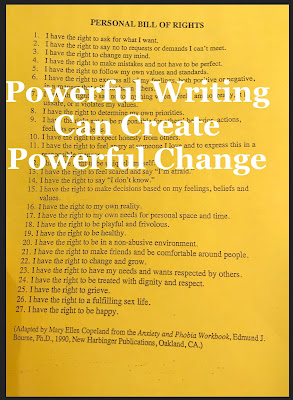 (handout from a WRAP workshop I took recently)


I've started an online mental health newsletter and the first issue is out! If you sign up here, then you will also get a free PDF that I wrote for a NAMI Family to Family class with the top things I'd like supporters to know and some basic resources.

The Feminist Wire - The Magic and Fury of Audre Lorde: Feminist Praxis and Pedagogy
Lorde suggests that in order to stop the abuse, we must begin the dialogue. And we cannot accept some forms of violence and condemn others. In other words, we can’t fight against domestic violence and sexual abuse and do nothing about homophobia.

WRAP - A Season Of Wellness

The Guardian - A Journey Through A Land Of Extreme Poverty: Welcome to America