Yes, I am going out of order again!  I am not liking most of the prompts as well as I did last year, nor do I have as much time as then either.  Oh, well.  Day 23 is all about social media and technology.  First, what would my life be like without social media?  I know when I started using social media-in 2007, when I first started going to Georgia College and State University for a degree in music therapy.  Everyone was using Facebook to keep in touch with people and I had been so out of it that I didn't even really know what Facebook was!  That's probably because the students and classes at my previous college, Georgia State University, were not so nearly connected.  GSU is huge, in the middle of Atlanta, and for the most part people just go to class-the campus is too big and too urban for a lot of socializing.  I suppose that might have been different if I had joined a sorority or a club, but I joined social groups that were not geared towards college students, like my church and Lips Down on Dixie (the local Rocky Horror Picture Show group).  At GCSU, the atmosphere was completely different.  If you wanted someone to contact you, you would just say, "Facebook me!"  So many people were on Facebook that I realized that I needed to join or I would be ostracized.  I got a friend to help me figure out MySpace and Facebook and I have been busy in the social media world ever since.  MySpace is now obsolete, but I still obsessively check Facebook every day and I promote my blog also on Twitter, Tumblr and Google +.

What would my life be without social media sites?  I would feel a lot less connected.  Through MySpace, I found a bunch of old friends from Berry College that I had lost touch with and it felt wonderful to see them again.  It still does.  MySpace let me reconnect with my best friend from Berry College and that surely is a blessing.  We had both needed to take a break from each other for a while as we sorted out and healed from our own pain and it is a joy to have her back in my life again.  We are both much happier people now and even though we live several hours away, we try to see each at least several times a year.  In fact, we are going to get together in about a month for my birthday celebration.  Through Facebook, I have continued to keep in touch with old friends and I have even made some new ones that even though I have never met them face to face, they are people who are still very dear to me.  Like I talked about in my last post, seeing different people being vocal in supporting LGBTQI rights or mental health rights - I belong to several mental health groups on FB - even if it's just in posting a rainbow, an equality sign or the NAMI logo, helps me feel more empowered and less alone.

Now if I could design an app that would help me keep track of my condition?  I have a great idea and if anyone reads of my idea and then wants to make it, be sure to send some of the money my way!  I would like a medication tracker app, where you could list all the medication that you've previously taken, why you took them, and why you don't take them anymore.  And then when you're put on a new medication, you log in the dosage and the reason for taking it.  Your app would put the info on a chart and there would be space to write down if you think the medication is actually working in the way that it should and what kind of side effects you are experiencing.  (Each time you would enter in a medication's name, the app would automatically link it to a page that would list all the possible side effects and their probabilities, as well as the medication's purpose.)  This would be a great tool for the consumer to share with their doctor.  By tracking your medication's impact on a regular basis, you would have a much more accurate picture of whether the medication is actually beneficial or not.  Using an app like this would have really helped me communicate with my doctors better and it would have prevented so much grief.  There have been several times where I have forgotten why I stopped taking a certain med a few years ago, only to rediscover why when I try it again and then experience unbearable side effects.  This app would be great for anyone who has a condition that requires multiple medications, but especially for those with mental illness, because so often finding the right psychotropic medication is trial and error.  Many people with mental illness have tried dozens of different kinds of meds before figuring out what really works-I know I have!  Of course, I could just make my own chart, but it would be so much easier and fun to use if there was an app that I could download to my smartphone.

Here is a crude example:

Wouldn't that be handy? Ok, so I obviously could keep up with a homemade chart now, but it would be so much more convenient and fun if it was in a super cool app! Where would you be without social media? Do you have any ideas for a healthcare app? 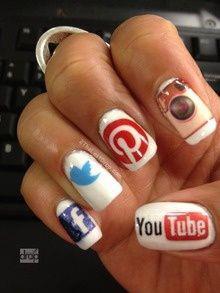 Ela’s Words in the Web - Don’t Believe WhatThey Say About Adversity! — #HAWMC 21
There is adversity aplenty just moving from one day to another. The idea that the best work can come out of adversity is tantamount to telling me not to take my meds or advising someone who needs oxygen to leave their tank at home.

You Are Not Alone

In this culture you are not a person with an illness, when it comes to mental illness, you are the illness.  Do you ever hear anyone say “that cancer person”? But you do hear “that mentally ill person.”