2019 was the year of books!  It was the first time I completed my yearly book goal-I read 34 books.  Now, yes, several were kid's picture books and many were graphic novels and quite a few were audio books...books are books and it is important to read to learn and to exercise that imagination.  These are not all the books I read this year but this list covers most.  It's sorta funny; I didn't realize just how many existential, depressing books I read this year til I looked at the list.  I do run a facebook group called "Morbid Positivity," after all...  Since I enjoyed more books than I would want to write a full blown review for, I decided to give them all descriptive awards with links galore.  I hope you notice that none of the links are for Amazon or imdb.

Most real life depressing yet also inspiring theology graphic novel
The Faithful Spy: Dietrich Bonhoeffer and the Plot to Kill Hitler by John Hendrix
(a SpeakEasy book, which means I have a fuller book review at the end of this post.  SpeakEasy lets you read books for free if you will review them within a month)

Most existential awful horrible scary audio book,
Revival by Stephen King
(even over the book where a guy turns into a cockroach; HUGE Trigger Warning)

Second worst to imagine award
The Metamorphosis by Franz Kafka
(The first is Revival; that book really is NO JOKE)

Most horror nerd fun to read award:
Most non-politically correct award:
Dracula's Guest by Bram Stoker
(FREE on Kindle)
(The book was recommended at a horror panel at DragonCon
2019 DCon Horror Track Ruled)

Most practical and useful awards
How to Boycott: Make Your Voice Heard, Understand History, and Change the World Zine by Joe Biel
A People's Guide to Publishing: Build A Successful, Sustainable, Meaningful, Book Business From The Ground Up by Joe Biel

Comics I wished were available when I was a teenager:
Ms. Marvel
Raven: Pirate Princess

Most nerdy award:
The Narnian: The Life and Imagination of C.S. Lewis by Alan Jacobs
-fairly dry but I loved it, especially finding out that C.S. Lewis had a fetish for whips
WHAT?  YES, it's TRUE!

Best Audio Book:
True Grit by Charles Portis
Read by Donna Tartt
(OMG, her voice made the book! Fantastic.
The 2010 movie by The Coen Brothers is fantastic too.)

Most profound book you should go read right now!
Radical Acceptance: Embracing Your Life with the Heart of a Buddha by Tara Brach

Yes, Neil Gaiman is Fantastic Award:
Anansi Boys
Neil Gaiman Audio Collection
(He reads his own books and has a great voice too)

I couldn't put this book down-I stayed up late one night to read it.  Before reading the book,  I had heard the name of Dietrich Bonhoeffer but I didn't know much about him; now I want to investigate some of his theology more in-depth .  To briefly, briefly sum up, Bonhoeffer was a Lutheran theologian in Germany during the beginning of the twentieth century.  He loved his country but was troubled by the rise of Hitler's fascism.  He studied theology in America, which changed his theology from passive to active-he recognized the role of the church as a community that can be used to create positive change.  He wrestled with the question, "is it okay to sin if you know it is for the greater good?"  He eventually decided,"yes," and became a spy working for the German resistance, involved in several plots to kill Hitler.  Unfortunately, all of the plans failed and he was jailed, tortured, and killed for his part.

What I found fascinating about the book is that it is not just about chronicling Bonhoeffer's life and story but also the story of Hitler's rise to power and how Germany could fall for such an evil man.  I think this is something incredibly important to study right now, as the world is falling under the spell of nationalism, fascism, and world leaders who want to take over for evil means.  I do not believe I am exaggerating.  I learned that Germany's leaders did not take Hitler seriously until it was way too late.  It was a case of underestimating run amok!  What author, John Hendrix, seems to want us to do is to wake up and learn.  The Faithful Spy speaks to my deepest fears-one of the reasons why the Germans did so little against the concentration camps is that so few knew what was actually being done at them.  This worries me to my core.  Do we know what is really happening at our refugee concentration camps?  I hate to sound so alarmist but I feel if I do not say out loud my most profound fear, then I am a failure as a human being.  What I learned is that we have to keep asking questions; we have to focus on what is going wrong if we do not want to be silently complicit.  I don't think this means not taking care of our mental health, but it also means not checking out either.  I believe if we are truly intersectional feminist spiritual people, then we must intentionally act against the forces of fascism and alienation taking hold of our society.  If you cannot do anything outwardly in solidarity, then at least be a person of kindness.  Kindness and service to love is needed now more than ever and is the only way I can see that will do any good.  Let your kindness, curiosity, and creativity take up space wherever you go.  Be a beacon of hope!  Read any way you can and then talk about what you read.  Be curious and kind into the new year.  Be morbidly bold, loud in your wonderful unique-ness.

While you can, choose love. 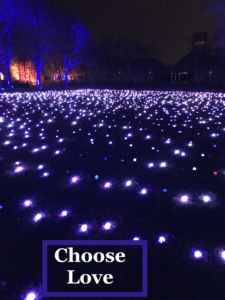