I Vow To Be Kinder To My Body and Mind

February is over and it occurred to me that I haven't done a post about it being National Eating Disorders Awareness month yet. To be honest, I've been very anxious and depressed this week. Fortunately, I am feeling much better after having talked about my feelings with friends and in support groups. The main reason why I have been stressed is because I am too hard on myself. To further elaborate, I went to a candlelight vigil for eating disorder awareness last week and it triggered some of my old eating disorder thoughts to come back.  I heard some stories of recovery and all I thought to myself was, "I didn't get sick enough.  I'm a failure."  I didn't even realize I was thinking this way until my therapy appointment a few days later.  Once I realized how eating disordered my thoughts still were, I beat myself up emotionally.  For days I would alternate between wanting to be sick again and being angry at myself for feeling that way.  But tonight when I shared during my support group, I was reminded by several people that those feelings are just part of the disorder.  I am not fully recovered, but am "in recovery" and I will always have to fight my eating disorder from time to time.  It's just a part of my life.  I was told that instead of beating myself up for having some eating disordered thoughts, I should congratulate myself for not acting on them.  They're right-I am WAY too hard on myself.  I think I am going to start making a list every night before I go to bed of at least five things that I have done that day for my recovery.  It can be small things or big things, but I need to start being kinder to myself and I think this will help.  I will post them on my tumblr page.

So things that I can continue to do that will help my eating disorder recovery are taking pictures of myself when I feel good and by cooking nutritious and yummy food.  Here is my last February fatshion pic for the year: 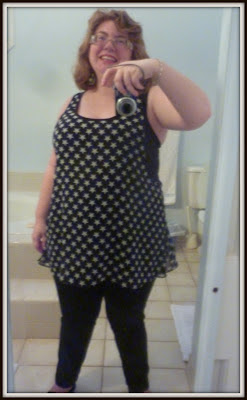 (Don't worry though, I'll still post fatshion pictures throughout the year.) I just LOVE the top!  Isn't it fun and flirty?  I got the shirt from Hot Topic and the pants from Torrid.  I must say that Hot Topic's sizing is frustrating, as this XL fits me perfectly, but other shirts in the same size sometimes run way too small.  I have learned the hard way to always try on their clothing before buying.

And then there's this foodie beauty: Cheese Grits Quiche 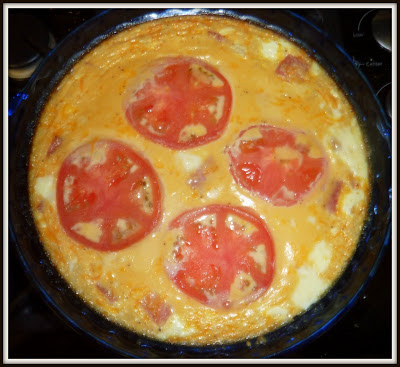 Isn't it beautiful?  It was my idea to add the sliced tomatoes.  I also substituted turkey bacon for the ham in the recipe.  Southerners know that few things are better than cheesy grits.  The texture was perfectly creamy and I loved that this was a healthy comfort food.  I will definitely make this again!

I think there is no better way to honor National Eating Disorders Awareness month than by promising to be nicer and gentler with myself.  I will work on treating my body and my mind with greater care and mercy.  I know that this will be hard for me, but it is a worthy goal.  I challenge you to be kinder to yourself too.

Psychology Today – DSM 5 Confirms That Rape is Crime, Not a Mental Disorder
Displaying a surprising ignorance of (and careless indifference to) proper diagnostic practice, these psychologists routinely and rotely misdiagnose mental disorder in rapists who are on fact clearly no more than simple criminals. They repeatedly state as misguided (in)expert testimony that committing rape is by itself an indication of psychiatric illness.
These pseudoexperts are not dissuaded by the facts: that rape as mental disorder has been rejected by all the DSM's and is almost universally opposed by the experts in forensics and in sexual disorders.
Feminist Armchair Regime - Identities Are Not Insults
"We never use people's looks, where they're from, what they sound like, how their bodies or minds work, or who they love as insults.  If we do that then we are saying that being that way is bad and wrong and every person like that is bad and wrong.  That is a very mean thing to do. How would you feel if people used something about you or your name as an insult?"
The New Yorker - Seth MacFarlane and the Oscars’ Hostile,Ugly, Sexist Night

The women were not showing their bodies to amuse Seth MacFarlane but, rather, to do their job. Or did they just think they were doing serious work? You girls think you’re making art, the Academy, through MacFarlane, seemed to say, but all we—and the “we” was resolutely male—really see is that we got you to undress.