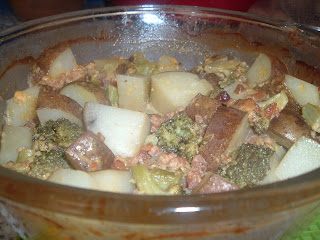 Today was a good day-I was able to sleep in until noon, I made a great dinner, and then I had a great time socializing at NAMI. Dinner was a really yummy cheesy broccoli and potato casserole that I came up with myself. The casserole had bacon in it, which on my list of "bad" foods is much worse than butter, so I was quite adventurous today!
I decided to use bacon, because it was in the potato seasoning packet that I used for the casserole. Sargento brand cheese has a new product out where it packages together several products to make a really good salad or baked potato and since I had a coupon for it, I bought one of the packages for baked potatoes yesterday. I discovered, though, that the potatoes I had bought were too small to be tonight's entree by itself, so I decided to make them into a casserole instead and I'm glad I did.
I had originally decided to serve the potatoes buffet style, so that I could avoid eating the bacon bits, but when I decided to make it a casserole, I lifted up the package and stared at it for a few good seconds before making the committment to use all of it. I didn't want good food and money to go to waste. Plus, I thought of my friend talking about how she likes bacon and who also has an eating disorder and I thought to myself, "If she can do it, then so can I!" And so I dumped the whole bag into the casserole container. The bacon bits were from real bacon, not that weird imitation stuff, which I have never liked-even before ED came into my life.
I used to love bacon as a kid. I liked to chew on the juicy, chewy, white, fat parts. My parents did not cook bacon very often, so it was usually more like a delicacy in our house and yet I know that by the time I was in fifth grade, it was relegated to the "bad" list. I now know that bacon every once in a while is not bad, but I still had to convince myself today that it was okay to eat. In my quest for control, I seem to have convinced myself that if I eat certain foods, life as I know it will end. But what would happen, I don't know! It's as if I expect the sun to blow up, the mountains to crumble, and the sky to fall onto my head if I break one of my rules. But you know what? None of that stuff ever happens! It's as if I am not in control!!! If I eat bacon or butter or cream, the world will not end, but my life will instead began to get even better as I realize that there is more to enjoy in this life than I ever thought possible.
Corey's Easy Cheesy Potato Casserole
Ingredients:
3 Medium Potatoes
1/4 Cup Milk
2 Bunches of Broccoli
1 Package of Sargento Broccoli & Cheese Baked Potato Starter Kits
1. Preheat oven to 400 degrees.
2. Cut the potatoes into bite-sized pieces and put them into a pot of water on the stove.
3. Cut the broccoli into bite-sized pieces and put them into a glass casserole dish.
4. Pour the contents of the Sargento package into the dish.5. Add milk and potatoes to the dish and stir.
6. Bake for 30 minutes and then enjoy!
I made this dish for dinner, but it would also be great for breakfast too! 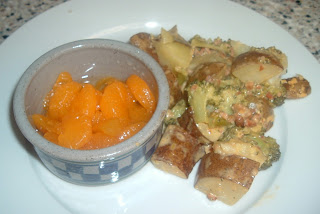 Mandarin oranges taste good with the dish too!