Jimmy's Stars - Recommended Reading about the Consequences of War

I only finished one book this month! I’ve already finished three of the books I started in February, so rest assured there will many more books reviewed in March. 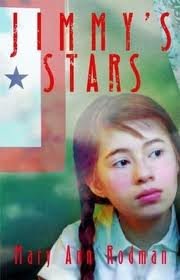 Jimmy’s Stars by Mary Ann Rodman – An excellent book that really should have won awards, although the girl I read it to thought it was too sad. It’s set in WWII when Ellie’s older brother goes into the army. Ellie is eleven-years-old and is a strong character who has to learn how to deal with extreme grief. The book deals with the effects of war very matter-of-factly, not only with the consequences of death, but also of the mental illness, post traumatic stress disorder, or as it was known in the 1940s, shell-shock, and the sacrifices that the people on the home front had to make as well. In fact, I am going to include this book on my Related Books page, because of the way it realistically portrays mental illness. Because of how realistic and stark sometimes the book is I would only recommend it for mature middle schoolers and older. Fortunately, the book is not overly sentimental or depressing. Although the story is about the horrible consequences of war on the people at home, it is still ultimately a story of hope, forgiveness, and a young girl coming of age. I heartily recommend this book, although you might want to read something a little lighter afterwards.