I only read one book this July, but it was a great one. I was at my favorite used book store one day and I was at the counter when all of a sudden the thought occurred to me that I should look in the sci-fi section to see if they had any books by my favorite author, Octavia E. Butler and they actually did have a book that I hadn't previously read! 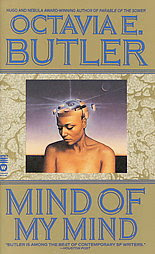 This is the sequel to her book, "Wild Seed," although this book was written first. The ending was really awesome and creative and left me feeling good. I really need to get the next book in the series, as I am dying to know what happens to Mary's community. Mary is a product of the awful Doro and she is the first person who is a successful threat to him. When she is going through her transition period into her psychic abilities, she forms a community of people by using mind control. The novel, besides bringing brilliant insights to race, also brings about questions about community. Can a people be a community if they are forced into it? Mary's connects telepathic people, who at first are incredibly angry that they can be controlled by her, but then they see that she can bring together a people that once could not stand to be near others like themselves. But Mary's people also enslave "mutes," or people without telepathic abilities. They justify it by saying they are not harming the mutes and so are not like the harmful Doro, but one has to wonder. It brings forth the question, is a person who feels enslaved and victimized doomed to enslave and victimize others in their quest for their own empowerment? Perhaps, if a person is under the influence of a false sense of empowerment, but true power comes from within, not from controlling others.