I spent April writing WEGO Health HAWMC prompts and spiritual posts and so I am only now getting to my book reviews!

Here are the books I read in March: 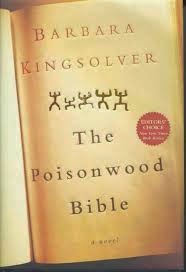 The Poisonwood Bible by Barbara Kingsolver

March was the month I spent reading for my feminist book club and I got to finally read the book that it seems like everyone but me has already read! I thought it was very well-written, but I probably will not ever read it again-I found the story of an ultra-religious, patriarchal, self-hating, condescending and abusive missionary triggering at times. The missionary takes his family to the Congo in the 1960s and the chapters are told from the women’s points of view-his wife and three daughters, which I found refreshing. The story certainly has a lot of adventure and drama! One thing that I really did love about the book is how it deals with disability. First, one of the daughters, Adah, has a disability. She is hemiplegic, meaning that she has “severe weakness on of the limbs on one side of the body.” This causes her to walk slower than everybody else, to retreat into silence, to fall into self-pity, but she is also brilliant, clever, skeptical, and quotes my favorite poet, Emily Dickinson. Some people had trouble relating to her, because her character is so dark, but as someone whose disability also gave me a darker side when I was younger, I can definitely relate to her character. I loved watching her grow up and mature.

I think the book wonderfully portrays how much the roots of awful, patriarchal, abusive men are based on self-hatred. At least this is what I believe. It is obvious that the father in the book hates himself and because he cannot love himself, he cannot love anyone else. I find this incredibly ironic, given the fact that he is a preacher and is supposed to be spreading the message of God’s love-didn’t Jesus say in Matthew 39, “Love your neighbor as yourself?” Nathan (the father) does not love his neighbors or himself. I believe the only way that we will overcome the patriarchy is by and through love-we must show and teach our men, women, sons and daughters what true love really is. True love is not always fluffy good feelings and it is not abusive either-it is steadfast and true, always working for the good of this world.

I recommend this book, but be forewarned that it can be a hard read if you are sensitive to abuse, spiritual, emotional and/or physical. I probably won’t read it again, but I can certainly see why it was nominated for a Pulitzer prize in 1999.
***********
That brings us to the second book I read for my feminist book club: 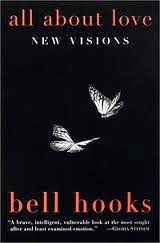 All About Love: New Visions by Bell Hooks.

I only liked it so-so while reading it, but its concepts have remained with me since then and have really changed the way I think about things, so I will say that I really recommend this book! If you’ve read Bell Hooks’ Feminism is for Everybody, then you know that Hooks loves definitions and in this book she uses the definition for love by M. Scott Peck from his 1978 book, The Road Less Traveled –

the will to extend one’s self for the purpose of nurturing one’s own or another’s spiritual growth-Love is as love does.” She continues from Peck…”Love is an act of will-namely, both an intention and an action. Will also implies choice. We do not have to love. We choose to love.” (Since the choice must be made to nurture growth, this definition counters the more widely accepted assumption that we love instinctually.) (4-5)

My book club thought it would be better if she started her definition at “Love is as love does”-that the word, spiritual adds a level of vagueness that is unnecessary and too complicated and I agree. In order for that whole quote to work as the definition of love, one would need to define spirituality, which she does later in the book, but it doesn’t quite work. To only define love this way begs the question, can atheists love and of course, the answer is yes. Her definition is biased towards spirituality, because she, personally, is more aligned with spirituality, which would have been fine if she was presenting this as her own personal definition that works for her, but to present it as the overarching definition that should work for everyone is misguided, which was our chief complaint-the book would be better presented as memoir than as researched feminist theory.

Now onto what did work for me:

I liked her point that women are not considered experts in love, even though they are the main readers of romances. Instead, they are to experts in the subject of death.

Somewhere along the way, in that passage from girlhood to womanhood, I learned female really had nothing serious to teach the world about love. No one around me, professors and students alike, doubted a woman’s ability to be serious when it came to thinking and writing about death. (xxii)

I, personally, have had enough of women obsessing over their own death and choosing to dwell negativity. I absolutely love, love, love the confessional poets, but I hardly ever read them anymore. What was really life-changing to me is her romantic insight as I have been dating recently!!! She says to not say that one is “falling in love,” but is “moving towards love,” for where one implies victimhood, the other implies choice and consent. Every day that I am in a relationship with someone, I can choose to keep on moving towards loving that person and this empowering statement agrees with one of my positive affirmations –

This way of looking at love helps me feel grounded and not feel so out of control, but empowered. This books has some faults and sort of drags towards the end, but I still heartily recommend it. It will stick with you and it just might change the way you think about certain things that previously you thought were hard and fast. Not to be cheesy, but love is the answer. It is the way to change the patriarchy, it is the way to embrace life, it is way to a life filled with hope.

Eberhardt Smith – Stop Saying “I Have A Boyfriend”
If a man is coming on to you (and you are not interested — if you are, go for it, girl!), respond with something like this: “I’m not interested.” Don’t apologize and don’t excuse yourself. If they question your response (which is likely), persist — ”No, I said I’m not interested.”

Gradiant Lair  - Liberating The Black Female Body:Thoughts On The Voices Of bell, Janet, Shola and Marci

bell hooks is not the expert on all things Black, woman, Black woman, womanist/Black feminist or life. She is however, human, fallible, brilliant, interesting, accomplished,usually compassionate and thoughtful and a trailblazer in many ways.
Nursing Clio - Suicide Is Not Beautiful
Self-destructiveness: the sole form of violence permitted to women. Isn’t this point worth examining? I don’t think Rich meant to argue that women should go out and perpetrate acts of violence against other people instead, at least not in the literal sense. She meant, I think, that when women’s lives become unbearable, when social and political and personal circumstances make them feel desperate, they often silence themselves, even doing violence to themselves, rather than making noise and fighting against those external forces. And she was right, wasn’t she? At least to some extent? I’m thinking, here, not only about suicide but also about eating disorders and self-injury behaviors like cutting. Women, Rich would argue, express negative emotions and claim whatever small measure of power they can grasp not by striking out at those around them but by hurting themselves.