I spoke at my church last Sunday in a service about mental health based on the scripture Mark 5.  Here is what I said about my new job:

I just got a part-time job at the Decatur Peer Support and Wellness Center, a place that believes in focusing on strengths, not illness; on hope, not fear; on compassionate peer support, instead of cold, clinical diagnosis. I believe in these things too. I feel like my possibilities are endless now.

Here is Mark 5 and how I related the verses about the man living among the tombs to my own life.

Mark 5 New International Version (NIV) Jesus Restores a Demon-Possessed Man5 They went across the lake to the region of the Gerasenes.[a] 2 When Jesus got out of the boat, a man with an impure spirit came from the tombs to meet him. 3 This man lived in the tombs, and no one could bind him anymore, not even with a chain. 4 For he had often been chained hand and foot, but he tore the chains apart and broke the irons on his feet. No one was strong enough to subdue him. 5 Night and day among the tombs and in the hills he would cry out and cut himself with stones.

6 When he saw Jesus from a distance, he ran and fell on his knees in front of him. 7 He shouted at the top of his voice, “What do you want with me, Jesus, Son of the Most High God? In God’s name don’t torture me!” 8 For Jesus had said to him, “Come out of this man, you impure spirit!”

9 Then Jesus asked him, “What is your name?”

“My name is Legion,” he replied, “for we are many.” 10 And he begged Jesus again and again not to send them out of the area.

11 A large herd of pigs was feeding on the nearby hillside. 12 The demons begged Jesus, “Send us among the pigs; allow us to go into them.” 13 He gave them permission, and the impure spirits came out and went into the pigs. The herd, about two thousand in number, rushed down the steep bank into the lake and were drowned.

14 Those tending the pigs ran off and reported this in the town and countryside, and the people went out to see what had happened. 15 When they came to Jesus, they saw the man who had been possessed by the legion of demons, sitting there, dressed and in his right mind; and they were afraid. 16 Those who had seen it told the people what had happened to the demon-possessed man—and told about the pigs as well. 17 Then the people began to plead with Jesus to leave their region.

18 As Jesus was getting into the boat, the man who had been demon-possessed begged to go with him. 19 Jesus did not let him, but said, “Go home to your own people and tell them how much the Lord has done for you, and how he has had mercy on you.” 20 So the man went away and began to tell in the Decapolis[b] how much Jesus had done for him. And all the people were amazed.

I am like the man in the tombs and so are many others.  Borderline personality disorder and schizophrenia are labels that scare many people.  I have seen papers where psychiatrists and psychologists have called people with BPD “monsters” and it is common to see schizophrenia associated with violence in the media, when the truth is that people with mental illness are much more likely to be abused, scapegoated and bullied than to cause the violence themselves.  Because of the stigma, I have felt that I could tell no one what I was going through and that there was no way that people could truly love or value me.  This belief caused me to do desperate things in order to get my needs met.  The good news is that the man in the tombs was healed and so was I.  I believe he was healed by the bringing of him back into community, for it is community where we belong and it is community that we are healed.  We need people and we need God-just as we are in a relationship with God, we are in a relationship with the world and our communities.  It is a reciprocal relationship, as God and community have given so much to me, so I too have much to offer the world.  It needs to be recognized that people with mental illness, no matter how severe, have community value and the potential to change and grow.  We all have value.  We all have the ability to change and grow, just like Jesus and the man he healed, into our own resurrection and redemption. 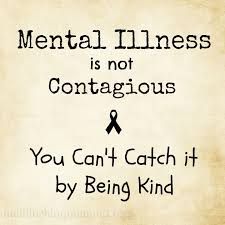