You see, love is energy. The soul is a huge vast place, and lots of it is dark, and it's full of energy and power, and thus can be bad, but it can be good, and that's the work, to change bad energy into good, when we desire good things and are attracted magnetically by them. (Plato's Podcasts: The Ancients' Guide to Modern Living by Mark Vernon, 20)

I was telling my dad the other day about how there are no badges worn at the place where I work to differentiate the staff from the other participants, he exclaimed,

I smiled inwardly in delight and agreed.  Yes, it is anarchy to have a place where everyone is a peer - staff and participants alike are equals in that they both have a shared experience (in this case, self-identifying as having a mental health challenge and very likely also having an addictive disease) and can learn from each other in a mutually beneficial way.  This IS anarchy and it is good.  In the United States, anarchy has been twisted to mean chaos, but that is not classically so - libertarian anarchy is a system where people govern themselves in a mutual and interdependent way.  It is compassionate and life-affirming - it is outside the patriarchy and I believe it is a possible way to bring heaven to earth.  It is about building relationships between equals and feeling personally responsible for one another because while the one in power will abuse power, the one in love will uplift all. (This is why I still resist the title of Jesus as king and favor instead the image of Jesus as friend).  To those who work from a place of love, redeeming, empowering abundant life is given - to those who come in power death of the soul is certain.

The traditional mental health-care systems torture many souls by keeping them alive, but retraumatizing them at every turn by constantly re-enforcing systems of power over and dominance.  It is only when systems embrace  a philosophy of power with that true healing can begin.  Good therapists do this by earning clients' trust and then teaching them how to trust in themselves.  CPS's do this even further by saying,

I, too, have through Hell and am now well - you, can do this too, so let us learn and grow together.

This is a concept that I believe in my whole soul, both as a theology student (Self-directed studying counts!) and as an experiencer of life who has been shown and thus follows the way of faith and hope.

I work in a profession that promotes anarchy - shhh! don't tell the government agency that funds us - we just might dismantle the harmful mental health system and achieve true loving equality despite ourselves.

*Many thanks to Noam Chomsky's book, On Anarchy, for helping me understand the true redemptive and equalizing force of libertarian anarchy (not to be confused with the United States' libertarian political party). 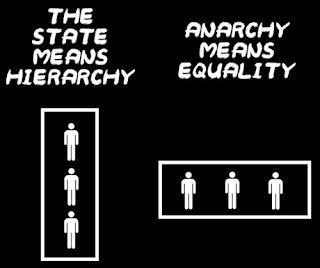