The acceptance of death gives you more of a stake in life, in living happily, as it should be lived.  Living for the moment. ~ Sting

You're blessed when you're at the end of your rope.  With less of you there is more of God and Her rule. (The Message Bible 18)

This is something I wrote during a concert at DragonCon:

(I am such an introvert that I had to get away from the crowd and instead plopped down in a corner, pulled out my tablet, and started blogging.)

Listening to Voltaire and feeling sentimental.  He just sang Hallelujah. sigh  Shortly before that, he told a story about how he was bullied in school growing up because he wouldn’t play football and liked puppetry and sci-fi instead.  He was called horrible names  and told to kill himself. (What a horrible thing to tell anyone!)  One day, he accepted death and said that he would kill himself the next day – but that for this last day on Earth, he would stand up for himself.  That day, he found that all the people that bullied him were so shocked that he stood up for himself that they basically ran away.  That night, he realized that he had the best day of his life and that he wouldn’t kill himself in the morning…but maybe the day after….and that has been his motto ever since – accept death, because once you realize that you’re going to die, nothing can be worse than that.  That’s how I live too and it’s why I think morbidity is a positive thing.  I accept death, and that makes me a happier person than if I was trying to run away from it.  When I accept death, it is easier to stand up for myself and to take care of myself – my days are numbered, so I need to make every day count.  (I often think of how I need to read more because the worst thing I can think of is dying before reading certain books I haven’t read yet – I can’t die before I’ve read more Audre Lorde and all of Anne Sexton, for instance.).   I once had a sponsor tell me that my morbidness was one of my character defects and I've always been offended by that - there is nothing wrong with being morbid, especially if it leads to a greater appreciation of life.  I think morbidness oftentimes makes other people uncomfortable if they themselves are not comfortable with death.  I feel sorry for them - to not be comfortable with death is not to fully embrace our life on Earth. I love all of you all readers and I hope you do not fear death, but a life lived in ignorance of its importance, sacredness, and inherent motivation to make the most of our precious time while alive.

BTW, I started a Facebook group called Morbid Positivity and Voltaire could be our mascot.  He is a very personable, friendly guy who is wonderfully morbid.  Here is a link to my favorite song of his - Death, Death (Devil, Devil, Evil, Evil) Song - it's very positive, actually! 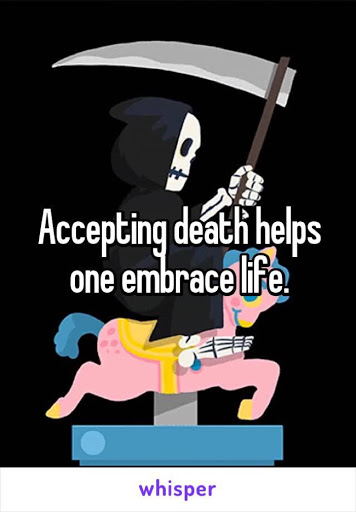