I read a lot of books this month!  I'll do my monthly book review soon, but I am going to go ahead and post a review of the book "Mutiny! Why We Love Pirates and How They Can Save Us," by Kester Brewin, because I agreed to post the review in thirty days and I'm almost out of time! 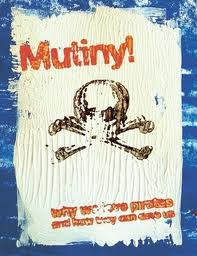 This is the first book from Speakeasy that I have really enjoyed in a long time!  Brewin gives us a history lesson on all the forms of piracy from the past to the present time and I came to realize that I really didn't know a whole lot about the subject previously.  Brewin describes pirates as people who unblock society from the injustices of capitalism.  Pirates are outlaws, because they go against the government to provide access to "the commons" or that is, information, land, or privileges that should be available to everybody.  Pirates are champions of fairer systems of government and money, where information and wages are shared, instead of one person becoming wealthy off the backs of others.  Of course, this does not mean that pirates are saints, just that they are people who are willing to go against those in power in order to be bearers of their own destiny.  What I loved is that besides exploring real pirates in history, Brewin also analyzed characters with qualities of piracy in popular culture, such as the main characters in Star Wars.  I also loved that Brewin looked at examples of female piracy and even proposed that women are needed to unblock society and enable it to grow to its full potential.  Brewin even goes so far to propose that Jesus was a kind of pirate in that his life's work was to show people that there is no separation between God and God's people.  Like the swashbuckler pirates, Jesus led a short life, which was ended by the authorities that he went up against, because he was trying to unblock society.  I recommend this book if you are interested in pirates, feminism, or feminist theology.  I was already interested in the last two and now I am interested in the first and may end up investigating piracy further.  Lastly, this book actually provides a refreshing analysis of the oft told biblical parable, "The Prodigal Son."  Brewin's feminist take on it surprised me and caused me to think, which I really appreciated.  Still, this book is not complicated - perfect for if you want a quick read that still causes you to think and learn.

Here is info on how to purchase the book.