Last week was a hard week not to succumb to depression-first there was the news about Robin Williams and then there was the news about Ferguson, Missouri and seeing the articles constantly on Facebook began to get me down.  I think constant contact with the news can re-traumatize people-there's no way you cannot convince me that that did not happen with the coverage of 9/11.  Seeing the Twin Towers go down over and over again and hearing the news stories over again made me paranoid and majorly furthered my depression at the time and I know it did for many other people too.

With Robin William's suicide, it is easy to blame his actions on other people-why did no one adequately help him?  I do think it is good to be more aware of how we can reach out to others if you know they are depressed, but when I think about my two friends that killed themselves in 2005, I know that it is a lie that suicide is always preventable.

Suicide is usually impulsive.  That is not how it is portrayed, but it is true, which is why it is so hard to prevent.  Also, if a person is truly suicidal, then they are probably not going to tell you, but are just going to do it.  My friend, Dan, had people concerned about him-he even talked to his doctor before going home, but he was able to convince his doctor that he would be fine.  Maybe Dan really thought he would be, but then he got home and his suicidal thoughts became too unbearable and he succumbed to his mental illness.  That very same day, my friend Bryce killed himself.  Like Dan, he had been attending a mental health center in Atlanta at the time,  so he also had people looking out for him.  He had been granted a week's leave to visit his family in another state and he would not have been granted this vacation if the staff thought he was in danger, but sometimes the most highly trained staff cannot tell when someone is suicidal.

Why am I telling you this?  To absolve you of guilt.  You are never guilty of someone else's suicide.  They are not guilty for their suicide, for in reality what happened is that they lost their battle with mental illness.  They did not "commit suicide," as if they committed a crime, but succumbed to their illness just as if someone died of cancer or AIDS.

For a long time after Dan and Bryce's death I was mad at the mental health center, at them, and at God, but I am finally at the place where I can say that it was no one's fault. Fortunately, I can also say that although I still have periods of depression and anxiety, you do not have to worry about me because I have made a pact with myself that I intend to keep that I will always live in recovery and that I will do whatever it takes to stay alive.  I wish that all people had that resolve, but not all people have that faith in hope yet.

This is what I want Robin Williams death to do-motivate people to reach out to their friends when they know they are in the throes of mental illness-give them a call or better yet, make them dinner, take them to a support group, offer to pick up their medication, go with them to the grocery store, take them to the movies or watch a movie with them at the house, do their dishes-change how we talk about mental illness-be kinder, non judgmental, non stigmatizing, BUT most importantly, I want us to celebrate his life, instead of purely focusing on how he ended it.  Robin Williams was a part of my childhood-his movies were the talk of all my friends and they imparted joy to our lives.  Mrs. Doubtfire is the one that made the biggest impression on me-the idea seemed a bit too silly, but he turned old lady crossdressing into an art form with his jokes and different voices.   When it comes to people who died due to mental illness, I want us to focus on the whole person and not just their illness or how they died-there is so much more to people than their mental illness no matter what.  We are more than a label-we are whole people. 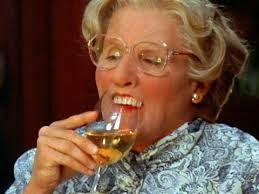