My Sermon-When People in Power Don't Get "The Big Picture"

This past Sunday I led the service at my church and preached. It felt good and I am proud of myself, although I was a little annoyed by how my voice started to get a little shaky towards the end. I spoke about a tough subject, but I didn't realize I was still that affected by the incident I was describing. I was also nervous, but the only way to get over nervousness is to keep putting yourself in the same nerve-inducing situation... Here is my sermon and the verses that go along with it. The verses are from The Inclusive Bible.

I changed some of the wording in the sermon, so that I don't name the people I talk about-I wouldn't want anyone to get in trouble...

In the second year of Darius the ruler, on the twenty-first day of the seventh month, the word of YHWH came through the prophet Haggai and told him, “Speak to Zerubbabel ben-Shealtiel, the high commissioner of Judah, and to Joshua ben-Jehozadek, the high priest, and to all the remnant of the people. Ask them, ‘Who is there left among you who saw this Temple in its former glory? And how does it look to you now? Doesn’t it seem like nothing in comparison? But take courage now, Zerubbabel!-it is YHWH who speaks. Courage, High Priest Joshua ben-Jehozadek! Courage, all you people of the country!-it is YHWH who speaks. To work! I am with you-it is YHWH Omnipotent who speaks- as I promised I would be when you came out of Egypt, and my Spirit remains among you. Don’t be afraid! For YHWH Omnipotent says this: A little while now, and I am going to shake the heavens and the earth, and the sea and the dry land. I will shake all nations, and the treasures of all the nations will flow in, and I will fill this Temple with glory, says YHWH Omnipotent. Mine is the silver, mine the gold! Says YHWH Omnipotent. The new glory of this Temple is going to surpass the old, says YHWH Omnipotent, and in this place I will give peace, says YHWH Omnipotent.

Some Sadducees-the ones who claim there is no resurrection-came forward to pose this question: “Teacher, Moses wrote that if a man’s brother dies leaving a wife and no child, the brother should marry the woman now widowed, to raise up children with her. Let’s say that there were seven brothers. The first one married and died childless. The second brother then married the woman, then the third, and so on. All seven died without leaving her any children. Finally the woman herself died. At the resurrection, who will be her husband? Remember, seven married her.”
Jesus said to them, "The children of this age marry each other, but those judged worthy of a place in the age to come and of the resurrection from the dead don’t take husbands or wives. They can no longer die, like the angels-they are children of God, since they are children of the resurrection. That the dead rise again was even demonstrated by Moses when, in the passage about the bush, he called the Most High ‘the God of Sarah and Abraham, and the God of Rebecca and Isaac, and the God of Leah and Rachel and Jacob.’ God is not the God of the dead, but of the living. All are alive to God.”

When I read those verses in Luke, I laughed out loud-the question posed by the Sadducees seemed so silly! I imagined Jesus thinking to himself, “What?! That’s what you’re going to ask me? What a stupid question!” *big sigh* And the Sadducees didn’t even really care about the answer. As it explains in the first verse, the Sadducees were the ones who claimed that there is no resurrection and here they are asking a question about the very thing they claim to not believe. They were not asking the question, because they were genuinely interested, but because they were trying to trip Jesus up. In short, they didn’t get it. They didn’t get that Jesus was there to show us how to be better people and how to be free, as Connie likes to say. The Sadducees, like so many others, were fixating on an unimportant question, instead of looking at the big picture.

The Sadducees were a priestly group, the Aaronites, associated with the leadership of the Temple in Jerusalem. Sadducees represented the aristocratic group of the Hasmonean High Priests. They insisted on strict literal interpretation of the Five books of Moses, the Written Torah. So the Sadducees were a group of great religious and political power, who believe on a “strict literal interpretation” of their holy book. Sound familiar? I think humans often get caught up in the unimportant questions of the day, but it’s even sadder when it’s a person in power. It’s like the story of the youth minister at Chrissy’s church. A few weeks ago, as many of you know, I was with a youth minister who started talking about “those people” and their “gay lifestyle” and whether living the “gay lifestyle” is right or wrong. I think this is definitely another case of a religious person in power who is not seeing the big picture. Who a person likes sexually has nothing to do with whether that person is righteous or not. What determines whether a person is acting righteously is found in Mark 12 - Love the Lord your God with all your heart and with all your soul and with all your mind and with all your strength.’[b] 31 And also to ‘Love your neighbor as yourself.. Is the person loving Godde with all of his heart, soul, mind, and strength? Is the person loving her neighbor as herself? Then that person is righteous!

As I was thinking about the Sadducees question and about the incident with the youth minister, I also thought about how it scary it can be when people in power do not get the big picture. When the youth minister starting talking about “those gay people” and “their lifestyle,” I felt hurt beyond belief. It hurt that someone in a position of Christian power didn’t get the big picture of Jesus. It hurt thinking that this person was teaching young people not in the way of compassion and liberation, but in judgment and close-minded literalism. (And I hope we all know that literalism is still a type of interpreting the Bible-for unless the priest follows all the codes for removing mildew that are in Leviticus, which I am pretty certain he does not, then he is still disregarding some laws as more important than others.) I felt angry and scared at the possible consequences of what he said, for he implied that someone living the “gay lifestyle” would go to hell. What if what he said led one of the kids down the road of self-hate? Or bullying? Or being bullied? Or even worse, I couldn’t help but think of the recent teen suicides and think to myself, “What if? What if? Oh my Godde, what if?”

When people in power don’t get the big picture, there can be serious consequences. That’s why I liked the verses in Haggai: Courage, all you people of the country!-it is YHWH who speaks. To work! I am with you-it is YHWH Omnipotent who speaks- as I promised I would be when you came out of Egypt, and my Spirit remains among you. Don’t be afraid! We are Godde’s workers and Godde’s children, as Jesus said. When people in power fail to see the big picture, it is our job to point it out. This is hard and scary work, but Godde tells us not to be afraid and to have courage. Godde has brought us out of many troubles and will do so again. We are a redeemed people, filled with Godde’s holy spirit. We are free if we will just remember who we are-we are Godde’s children, who need not be frightened. When people in power try to fool us, like they did to Jesus, we need to remind ourselves that we are the daughters and sons of the Most Powerful and Holy One. This does not make us more important than those that try to bring us down, but it does empower us to keep going. To stand up for ourselves and for those who are less powerful. I left that day when I was hurt by the youth minister and told him that I did not agree. I left with dignity and though I was very hurt and I cried a long time afterwards, I knew that I could not let the person who was only seeing the problem have the last word. I knew that only because I knew who I am. I am a child of God and I am important. And so are we all. Let us not be afraid, but remember the Holy Spirit is with us. Let us not get caught in the small picture of literalism and judgment, but become empowered in the knowing that we are all Godde’s powerful and loved children.

And here’s another message of hope: the big picture is that when it comes to the people in power, according to Haggai, Godde is going to shake things up- For YHWH Omnipotent says this: A little while now, and I am going to shake the heavens and the earth, and the sea and the dry land. Things are going to change and we are the agents of Godde’s change. YHWH All powerful says that there will be peace in this place. Sadly, there probably won’t be total peace on Earth during our lifetime, but you can carry an inner peace with you knowing that Godde fulfills Her promises and has given us the gift of the Holy Spirit to help us through our days. 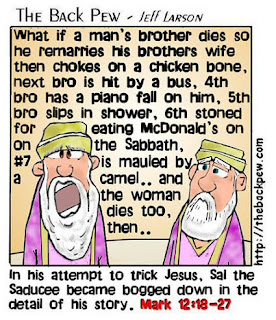 (from the funny Christian comic, The Back Pew.)
I hoped you liked my message. I would love to hear your comments!