Self - Love is a Hard Road to Travel When Triggered

By now, I usually consider myself pretty much eating disorder free, but Tuesday it got triggered when someone suggested that I join weight watchers.  The fact that I have gained enough weight that someone would think that I should lose it made me think that I was a failure and I was anxious and depressed for several days.  My self esteem went down dramatically.  I became paranoid that all people saw when they saw me was someone who was fat and that all I was was a series of problems to be fixed.  I forgot all my good qualities, even though I continued to do a lot of service work through my job and volunteer work.  Fortunately, I talked to my therapist Thursday and she was able to convince me that the majority of the people I know like me for me.  She also told me that while weight loss could be a goal for me one day if I wanted it to be, that I was too triggered by diet talk for it to be a feasible option for me now.  My health is not threatened by my fatness - contrary to popular opinion - and so she just wants me to continue to work towards accepting and loving my body the way it is now. 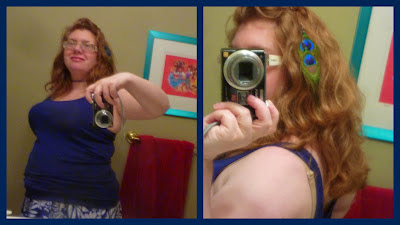 I took these pictures right before a party last year.  I got both the shirt and the skirt from Old Navy.  I felt really pretty that night!  It's hard for me not to be concerned with how people are thinking about me or for me not to judge myself incredibly harshly using black and white thinking. My therapist said that when I start focusing on the food that I should ask myself what emotions I am trying to avoid.

I wish our society would recognize how much weight talk hurts and how much it triggers that awful self-judging tyrant in our heads.  I wish we spent more time being grateful how all the things our bodies can do, instead of always putting them down.  Fortunately, I am in a much better place mentally right now and I am back to trying to love my body.  It's a hard thing to do when society tells you you're not good enough unless you're thin enough.  But I am enough - my self-worth has nothing to do with my size 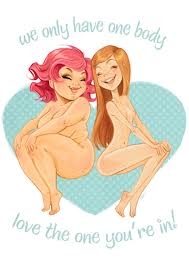 The Fat Nutritionist – About that Video
Next time you are concerned about a fat person’s health, consider that the best thing you might do for them is to treat them like capable adults and let them sort it out for themselves. Don’t add to the unhealthy storm of negativity and pressure and fear-mongering that is already surrounding them.
Behold The Tomb of Lady K’abel, MayaSupreme Warrior And Holy Snake Lord
According to the researchers, K'abel was one of the greatest rulers of the Late Classic period. She ruled with her husband, K'inich Bahlam, for at least 20 years (672-692 AD). She was also the military governor of the Wak kingdom for her family, the imperial house of the Snake King, and she carried the title "Kaloomte'," which translates to "Supreme Warrior," higher in authority than her husband, the king.
Crates and Ribbons - The Kissing Sailor, or “The Selective Blindness ofRape Culture”
It seems pretty clear, then, that what George had committed was sexual assault. Yet, in an amazing feat of willful blindness, none of the articles comment on this, even as they reproduce Greta’s words for us. Without a single acknowledgement of the problematic nature of the photo that her comments reveal, they continue to talk about the picture in a whimsical, reverent manner, “still mesmerized by his timeless kiss.” George’s actions are romanticized and glorified; it is almost as if Greta had never spoken.