Should People with Mental Illness be Sterilized? A Response to Bigotry

I was on a date earlier last year and my date made the error of sharing too much personal information too early.  Basically, it felt like a therapy session, only it was supposed to be a date.  Not good.  But what was really not good was that he said something that I found extremely offensive-so offensive that I put him on my "I-never-want-to-interact-with-you-again" list!  (That's bad!)  The person seriously told me that all people with mental illness should be sterilized.  When he saw my shocked face, he tried to get back in my good graces by saying that his statement included himself if he was ever diagnosed with a mental illness. Needless to say, it didn't help.

There are several huge things that are wrong with that sentence, the first being that who gets to decide who has a mental illness?  Do you know how many people in the United States alone have mental illness??  According to the National Institute of Mental Health, approximately one in four adults or 57.7 million people have a mental illness in a given year.  Are you seriously telling me that you are going to sterilize almost sixty million people?!  A lot of people don't realize that not all mental illnesses are of the same severity.  Some people have a mood disorder, like depression, that can be controlled with exercise, good sleeping and eating habits.  People with SAD or seasonal affective disorder can often be helped just by using a light box during the winter.  Should these people have to pay for a little light depression by being sterilized?  Does having the winter blues really disqualify one from passing on one's genes?  (My friend did clarify that he didn't see anything wrong with adopting kids, just passing on the genes.)  Or perhaps only people with severe mental illness should be sterilized.  I mean, that's only six percent of the American population or one out of every seventeen.  *Please note my sarcasm*

Besides the number nightmare, what really astounds me is how dehumanizing his idea is.  He wanted people with mental illness to be sterilized, so that they wouldn't pass on their genes.  But what about the fact that I would not be the person I am today without my mental illness.  Yes, I have severe mental illness and yes, I love the fact that I have medications that enable me to be more stable, but part of my stability is due to having to learn how to cope with the mental illness, itself.  As weird as it may sound, I am probably more healthy than I would be without my mental illnesses.  I eat regularly and get enough sleep, because I know that these things affect my mood.  I practice many coping skills to alleviate my anxiety and I am a calmer person.  Because I have been in treatment for an eating disorder, I probably have a better relationship with my body than the average woman.  And my "addiction" for support groups?  It gives me a supportive social network that many people lack.  Having a mental illness, especially one that is "severe," is a tough thing to live with and there certainly are many times when I wish that were "normal," but there are also many times when I am grateful for what I have gained due to my illness.  To say that having a mental illness is all bad and that people with it shouldn't be allowed to procreate says that they are less than human.  It says that their experience of life is devoid of any goodness that is worth passing on to another individual and that is just not true.

It is also dehumanizing, because it denies them choice.  Sure, offensive-guy has no problem with the concept.  Personally, I also have no problem with infertility for myself.  My reason is that I'm pretty convinced that I would have post partum depression from it.  I'm afraid that the hormone changes would make me unstable, but also I am not a particularly maternal person.  Being a mother does not really interest me.  I also do not have any desire to experience a baby growing inside me.  Some women long for that experience, but I do not, but just because I do not does not mean that I should force my choices upon someone else.  Having free will, or the ability to make our own choices, I believe is part of what makes us human.  If I decide that someone can not make their own lifestyle choices, because they have a mental illness, then I am taking away their humanity-at the very least, I am infantilizing them.  Historically, black womyn have been sterilized against their own will, because they were considered unable to care for their children simply because of the color of their skin.  We need to learn from past bigotry and not continue to perpetuate it.  Bigotry is what my date was promoting.  The idea that mental illness is so bad that one should be sterilized is bigoted and stigmatizing.  What we need is support, understanding, nonjudgment, and care - not stigma.

It is possible to have a mental illness, even a severe mental illness, and thrive.  Illness is a part of life and even if everyone with a mental illness was sterilized, there would still be people walking around with mental illness.  We are not to be feared or judged-we are simply humans, like you, deserving of basic human care and rights. 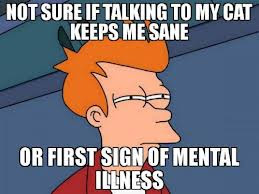 Crates and Ribbons - Why the Default Male is Not Just Annoying, But Also Harmful
When the Body Worlds exhibit first opened, an exhibition showcasing plastinates—preserved human bodies— posed in many different ways, many women were incensed at the fact that all the bodies, with the exception of the bodies used in the pregnancy section, were male. The message was clear: men are humans! They can be young or old, they can play sport, they can write, play chess, ride a bike…in short, lead full, complete lives. Women, on the other hand? They make babies.

Shakesville – Just No
There is not a woman in America who is laboring under the enormous misapprehension that crying evokes sympathy. Even our most intimate partners are taught to be suspicious of our tears, to regard them as mere markers of our intent to manipulate. We know quite well that crying evokes contempt, especially from those disinclined from extending us sympathy irrespective of our expression of its need.