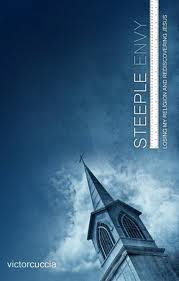 I am reviewing the book, Steeple Envy, by Victor Cuccia before next month, because I got it from The Speakeasy and they require that I write the review within thirty days.  Soon, I'll review the other book I got from them recently.

To be honest, I'm not sure what to say about this book...it has a good message, but it's written very poorly-I really wouldn't recommend spending money on it.  It's a very short and easy read, with so many humorous parenthetical expressions that I sometimes had a hard time taking it seriously.  This is not a scholarly work, but more of a witnessing to how Godde has worked in Cuccia's life.

Cuccia describes how many people are becoming disenchanted with big churches and with always putting on appearances.  He makes a good point that the American Dream of striving for success is not what Christianity should be about, but that we should really be more focused on being and showing others Godde's Love.

Victor Cuccia tells his story about leaving his ministry at a mega church.  He then starts a Bible study that eventually turns into a much smaller, but more intimate church.  Cuccia posits that more intimate, relational, and giving churches are really more in line with how the early churches were than the big, impersonal mega churches are and I can believe it-my church is also a small, intensely relational organization.

Cuccia is also the co-founder of the 12x12 Love Project, which is an organization that builds houses in Guatemala.  Again and again, he talks about how the things he needs for his church and Guatemalan project seem to just fall into place.  He credits all of this to Godde and emphasizes the need to trust, but I must say that the way everything comes together for him gets really old after a while.  For while I believe that all things eventually come together for good, I don't believe we always get our needs met just because we believe in Godde-if that were true then so many people wouldn't starve or die from poor sanitation every day.  If you manage to get your needs met, then you are very lucky and should be very grateful.  You should use your privilege to help others get their needs met too, but you should not make the mistake in thinking that your privilege is the result of superior trust in Godde.  My Godde does not play favorites!

All in all, I liked most of the messages of the book and even wrote some quotes down in my inspirational quote book, but I do wish that it had delved deeper into the issues written about and that the writing was of a higher quality.  Personally, I would save your money for a different book.  If you want to know more about Victor Cuccia, you can find him on facebook and on twitter. 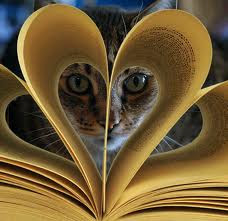 This Ain’t Livin’ – We’re Eating Less Meat…and Building More Factory Farms
In the Midwest, the number of Confined Animal Feeding Operations (CAFOs) is actually on the rise, with an upturn in permits for new facilities. Iowa residents are speaking out, as are Iowa farmers, because they’re concerned about the impact growing numbers of CAFOs may have on the environment and their quality of life.
Yahoo News – Justice Department Blasts Florida for PuttingDisabled Children in Nursing Homes
"I cry all the time thinking of [my child]. … There should be something out there to help children come home," the mother told Justice Department investigators, according to the letter.
TransGriot – According to Medical Experts, SRS isMedically Necessary
According to the American Medical Association, American Psychiatric Association, World Professional Organization for Transgender Health, severalprofessional organizations in the fields of medicine, mental health and social workand surprise, surprise insurance companies such as Aetna,  hormone replacementtherapy and sex reassignment surgery are medically necessary.
Healing from BPD  - Don’t Give Up: DBT for Distressing Self Harm Thoughts

Emily Willingham - Fathers? Do they matter or are they just to blame for autism andschizophrenia?

Second, people with autism or schizophrenia are not by definition “wildly dysfunctional,” no matter how you translate that phrase. Autistic people are all around you, reproducing, sometimes working, yea verily even “flourishing romantically.” Ditto people with schizophrenia, a term that often gets vague use and can reference a diverse group of conditions with a range of manifestations. And given the popularity and romantic or reproductive success (if you can call it that) of truly “wildly” dysfunctional people, such as the Byronically dysfunctional Heathcliffs of the world, “bad boys,” murderers, or Keith Richards, I can't even buy the statement that "wildly dysfunctional" people don't flourish romantically (although, of course, romance isn't required; just ejaculation at the right time and place).