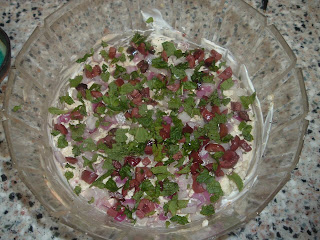 I've always had a love-hate relationship with Superbowl Sunday. Mostly hate. And there are many reasons for this: 1) I think football is stupid and I’m pretty sure that it produces stupid people as I’m absolutely sure that football players bang out their brains with each fumble and tumble and tackle 2) because of the first reason, I think watching football is pretty stupid too 3) superbowl parties have really scary (to me), fattening, high-caloric food 4) until about eight years ago, X-Files was on and I had to call my parents to make sure that it was being taped or ALL HELL would BREAK LOOSE!!! Really. My life for a long time was spent being concerned about my fat/caloric intake and the lives of some really awesome FBI agents. The only two things good about superbowl Sunday were: 1) a party and 2) commercials, with the commercials being the best part.

My church, Circle of Grace, which has its services at 5pm decided to make sure its service was done n time for us to watch the superbowl immediately after and we were told to bring superbowl-type finger food for a one-of-a kind potluck. Well, I like my Circle of Grace people and decided that a party would be fun, especially since the X-Files are over. And I did have fun. I learned a new way to play dominoes and I ended up being one of the last people to leave, with the result that I almost enjoyed watching football. But the best part was that I did not dread the food. In fact, I made a sizeable contribution with two homemade dips, with one being my own recipe!

They were both pretty healthy, which made me happy, but it made me even happier that they were both widely enjoyed! The first one I made was a Greek seven-layer dip-I made my minister try it out first, because I had never had kalamata olives before and I wasn’t sure if I liked them, and as if turns out-I do! The second is a mixture of lentil soup, sour cream, cheese, tomatoes, and Paul Newman salsa. Yum! If you want me to post the recipes, let me know! 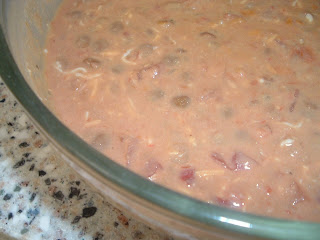