The Fox on The Fairway Just Might Be Me

I may have mental and physical illnesses, but there is much more to who I am, which is why I try to keep my blog diverse. When I am well enough to be intentional about my posting, then I try to have a post about a food, fatshion, an inspirational quote, a new coping skill, and a feminist critique all on the screen. I post pictures of myself (fatshion), not because I am horribly self absorbed, but because I want to normalize my body. The media pushes images of super skinny women in our faces all the time and it promotes the idea that if you are not super skinny then you must hate your body and want to change it. Being happy and confidant in a large or even average sized body is not seen as an option in our society and yet, I am here to tell you that it is. It is possible to happy with your body; perhaps not all the time, but it is a worthy goal. The number one thing that has helped me build up my self image and esteem is by visiting blogs where there are tons of pictures of fat people, smiling and sure of themselves. I still do this and it is very healing. It makes me feel like I'm not so alone. It reminds me that recovery is not about what size I am, but about my state of mind. In a world where the media bosses only want to show us pictures of an impossible ideal, showing pictures of people of all shapes and sizes is a liberating and revolutionary act. It's an act that tells them that my mind and my body is my own and in an era where state legislatures are passing bills limiting abortion rights and sex education standards, that is a statement that cannot be said enough. With that being said, here are two pictures of me a few weeks ago. I was slightly dressed up to see the play, "The Fox on The Fairway" at the Aurora Theatre. I didn't think a play about golf would be that entertaining, but it actually was very funny. It was a farce that reminded me of Steve Martin, one of my favorite actors. The outfit I wore that day was very comfy and yet I still felt very fatshionable. 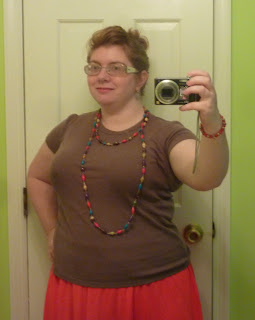 I wish I had taken a full-length picture of myself, but I don't have a full-length mirror.  One day I'll have to buy my own, so that I don't have to sneak into my mom's bathroom!  Bracelet: Wet Seal from a loooong time ago  Necklace: gift from a friend (The beads are made from painted magazine pages!)  Shirt: Target? Skirt: Old Navy 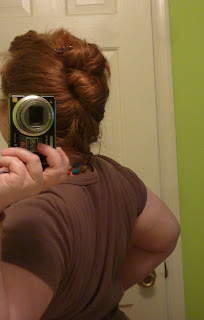 I just had to put my hair up-it's too hot down here, not to.  As I feel better, I find myself spending more time playing with my hair.  I feel almost like I'm reconnecting with an old friend, as I experiment with different styles.  The Fox on The Fairway?  Just might have been me.

This Ain’t Livin’ -  What Value Does Shock Really Have?
As a friend of mine often says, ‘awareness is not action,’ and simply being aware of something doesn’t translate into action.  […]  More critically, I’m going to interrogate the claim that raising awareness is necessary or serves an important function; I’d argue that if all you’re doing is raising awareness, you really aren’t doing very much for the cause, especially when it happens in a limited environment like that of a gallery or institution, where attendees are probably already aware.
This ain’t Livin’ - AN EASY SOLUTION TO PRISON OVERCROWDING: LET PRISONERS OUT
Early release is also an important component of prison reform, which requires rethinking the purpose of prisons. Such facilities are primarily positioned as houses of punishment, with a side of protecting society from the wicked evils of those inside. Approaching the prison system as reformative rather than punitive opens the door to providing training and career opportunities in prisons, and to using good conduct credits in an effective and efficient system. Prisoners can earn their way to early release through good conduct, creating a performance incentive within the system that encourages people to seek out opportunities as they become available.

The Feminist Crunk Collective -Asking for Sex: What Do You Do When the Guy Says No?

Of  late, I’ve had more than a few homegirls tell me about the negative reactions that they have gotten from men they were casually involved with, when they tried to prioritize sex in the interaction. Apparently, even when these brothers weren’t all that interested in a relationship, they took it as a serious blow to the ego, to find out that sisters just wanted to engage them for their bodies and sexual talents.

And in the classic fashion of those with privilege, they played the victim, changed the rules, and refused to give the thing they had the power to give. In this case, sex.

Dances with Fat – Speak for Yourself Alton Brown

There seems to be a pressure on celebrities who’ve lost weight to then claim that their lives before the weight loss were awful (despite the fact that they had their own television shows, were Grammy winners, Oscar winners, pop stars and famous in a way that millions of people want to be but very few actually are.)  Many times this life improvement has nothing to do with the change in body size, but is because they have, (at least temporarily) moved out of an oppressed class.

What Sedgwick means is that to be closeted is only meaningful by its relation to heterosexual supremacy, heterosexual “normality.” Coming out, which only occurs in the first person, is a double statement – “I am [GLBTQ]” and “I am not [heterosexual and/or cis].” To not make this statement is to be very often, perhaps always, taken for heterosexual, because of what queer theorists like Sedgwick call heteronormativity.   […]  So when heterosexuals ask, “why does Anderson Cooper have to come out as gay,” I reply:“because you do not have to come out as heterosexual.” […]  So when heterosexuals ask, “Why did it take so long for him to come out,” I reply with a question of my own: “why did it take you so long to make him feel safe enough to do so?”
Womanist Musings - Lessons I Teach My Children
My son has learned about racism through his lived experience.  I have taught him about slavery, jim crow and the civil rights movement.  What I don't want him to believe is that this is the worst evil ever perpetuated by humanity.  I want him to understand that the true evil is "othering".  People have a tendency to engage in oppression olympics as though there is ever such a thing as a good oppression.  The truth of the matter is that anytime someone's humanity is denied it is an injustice.  […]  The fight for justice cannot be only about ending our own oppression but oppression period.