The Way to Joy and Peace Involves Hashbrowns

The fifth promise in AA is that "the feelings of uselessness and self-pity lessen" and I am truly experiencing that promise right now through my cooking for my family. It feels really great to make meals that people appreciate and are tasty. This is a meal that my dad absolutely loved-hashbrowns with bacon, onion, cheese, and apples. Apples?! I know you're skeptical. Everyone I told about the ingredients did a double take when I said the last one, but believe me when I report that apples are perfect for cheesy, bacony hashbrowns.

I got the recipe from my usual site-allrecipes.com But first, a word of caution: this recipe is called "hash brown apple pancake," but if you are planning to truly make it like a pancake, then use a small skillet. Otherwise, the pancake shape will not work.

Obviously, I did not use a small pan! But that does not matter, because the shape really does not influence the taste and the taste is fabulous.

This brings me to another word of caution: double the recipe! The recipe is supposed to serve four, but it barely serves two, which is very sad, because besides those two things, this is a great recipe.

Also, I added bacon. I thought it would go great with the other ingredients and I was right.

In a small bowl, combine the hash browns, apple, onion, chives,bacon, salt and pepper. (Although I did not use chives...) 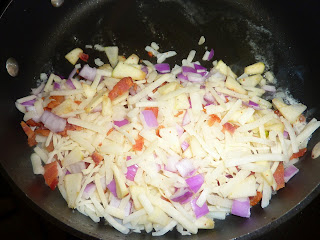 In a large nonstick skillet, melt 1 tablespoon butter and 1 tablespoon oil over medium-high heat. Spread half of the hash brown mixture in an even layer in skillet. Sprinkle with cheese; top with remaining hash browns. Press mixture gently into skillet. Cook for 5 minutes or until bottom is browned. 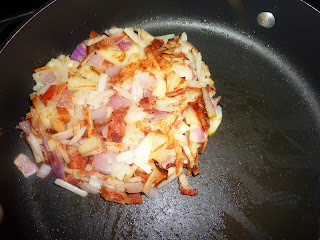 As you can tell, I tried following the directions and I even tried to flip it, but it totally did not work. Oh, well-as long as it does not affect the taste, then I don't really care.

I've been thinking about how everyone was surprised that the dish tasted good when I told them about the ingredients, specifically the apple, but it is a lot like recovery from an eating disorder. Relapse rates are really high. They're high for any kind of addiction, but especially high for eating disorders. I remember the last time I was at the hospital, I got very sad on the last day and I asked my case worker, "What if I relapse again?" Her response was, "Statistically, you probably will." At the time, that answer did not seem helpful at all. In fact, I was a little resentful towards what seemed like a very insensitive remark, but she was just being truthful.

And her answer did help, because it made me angry. It got me out of my pity party and I was instead angry at the disease. I did not want to be a statistic, but I did want to be useful again. I wanted my life to have meaning and I have found it by putting one foot in front of the other and by cooking one more meal after meal. "Feelings of uselessness and self-pity" have lessened and are now being replaced by feelings of joy and peace.