There Is A Fault in Reality - A Documentary Review

A few days ago, I got contacted to review the documentary on schizophrenia called, There is a Fault in Reality.  (Click on the title to watch the movie.)  It is described as being "about people trying to live with their mental illness of schizophrenia and the journeys that they have gone through to get to where they are today."  Here is a longer synopsis of the documentary from the Snag Films website:

Roughly 1% of the population suffer from something called 'schizophrenia' yet there is little agreement about what this represents, what causes it, or how best to treat it. Despite thousands of research studies, if you've been diagnosed with this 'disease of reality', it is unlikely that anyone will have asked you about your experiences - these are not considered scientifically meaningful. All of these contradictions pose an important question: if schizophrenia represents a fault in reality, with whom does this fault lie? In THERE IS A FAULT IN REALITY, writer, director and psychotherapist Tom Cotton explores the stories of three people – Jon, Peter and Jacqui, who’ve all battled with the diagnosis of ‘schizophrenia’ in different ways, with varying outcomes. Through them, we enter a detailed insider’s view of 'schizophrenia', which bears little resemblance to what we think we know. As their stories unfold, the voices they hear are revealed to have clear meanings, and to have identities that are anything but ‘mad.’

The film is about thirty minutes long and I watched most of it.  Honestly, I would give it about 3.5 stars.  I really like that the goal of the film is to try to reduce the stigma of schizophrenia.  I know from personal experience that schizophrenia is still one of the most stigmatized mental illnesses in our society.  The stigma for schizophrenia is so pervasive that I have heard a lot of it even from members of mental health groups that are supposed to be combating stigma themselves.  Hearing stigmatizing talk from them always makes me particularly sad.  I also really like the fact that the way they are trying to combat the stigma is by letting the people diagnosed with schizophrenia talk about the experience of living with it, themselves.  I also know from personal experience how healing that is.  Every time I tell my story, a little layer of my own personal shame peels off and other people get just a little bit closer to seeing my true self.

On the other hand, I did find the documentary a little triggering.  All of the personal stories include descriptions of suicidal ideations and self-harm-they are not glamorizing them by any means, but still, I found it slightly triggering.  I could tell I was getting triggered, because I could feel my body tensing up, but it certainly didn't ruin my day.  If you are sensitive to hearing those kinds of stories, then I would not recommend watching the movie.  In fact, I really felt that the documentary was more geared towards those who do not have schizophrenia, than to those who do.  I also had a problem with the fact that the movie seemed to me to put a negative spin on taking medication.  Yes, it is true, for most people the medication is not a cure.  It is also true that the medications can have some awful side effects and that it can take a long time to find the right combination.  Still, by mainly showing the negative sides of taking medication, I believe it unfortunately furthers the stigma already surrounding taking medication for mental illness.  It's not that I do not want them showing the downside of medication, but that I would like the story to be a little more balanced.  Show the negatives and the positives, because I have known many people for whom taking medication has proven to be a life saver, even if it is not a cure.

Ultimately, I thought the film did a fairly good job of showing that people with schizophrenia are not "crazy," which is, of course, the most important thing.  Yes, Jon, Peter, and Jacqui all had psychotic episodes in the past, but they are also all living in the present filling their time with various  fulfilling pursuits.  Two of the people facilitate support groups and another performs his poetry at clubs.  That's what I really like to see-people with mental illness, especially with an illness that can be so devastating-moving on with their lives and promoting positive change in this world.  I know from personal experience that psychosis can be terrifying and incredibly isolating, but I also know that after an episode, with time, one can pick up the pieces and form a life that is still good. 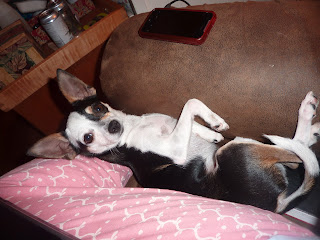 (Sadly, I couldn't find a good picture to represent schizophrenia and hope, so I present you with some squee! named Kelly)

BoingBoing - The Only Good Abortion is My Abortion
*I’ve known women who had abortions, women who gave a baby up for adoption, and women who raised an unintended baby on their own. None of those options are easy. None of those options are any less painful, traumatizing, or side-effect filled than any of the others. They only seem that way to people who haven’t experienced them.
Cnn.com - I Don’t Own My Children - DON’T READ THE COMMENTS!
Would you want your daughter to have sex with her boyfriend simply to make him happy? Parents who justify ordering their children to kiss grandma might say, "It's different."
No, it's not, according to author Jennifer Lehr, who blogs about her parenting style. Ordering children to kiss or hug an adult they don't want to touch teaches them to use their body to please you or someone else in authority or, really, anyone.
Shakesville– Fatstronauts 101
I'm not trying to lose weight. I'm trying to be as healthy as I can be at whatever size I am—a paradigm so outside the mainstream that people can't look at my fat body in any other context than within a frame that dictates I must be trying to change it.
Culturally Disoriented…and Working On It - The Friendship that Dares Not Speak its Name: Female Friendship in Science Fictionand Fantasy.
Where are the stories about women mentoring other women? Where are the stories of women who have been best friends since childhood? Where are the stories where two wacky women are thrown together on an intergalactic adventure? Where’s my female Sherlock Holmes and Watson duo?
Where are my stories of epic sromances (rather than bromances) where the (female) hero would cut through entire armies to save their (female) friend? […]  It’s very bizarre. Because – and I hope SF/F authors and scriptwriters know this – there are a lot of women in the world.  […]  Isn’t it sad that we can imagine faster -than-light-travel, fire-breathing dragons and cyborgs, but we can’t imagine two women talking to each other?

Terrible Minds - On the Subject of Being Offensive