Day Three was a day of glorious pictures.  First, we went to Trunk Bay Beach.  I did not feel too good that day due to chronic fatigue and fibro, but I distracted myself by taking lots of beautiful pictures. 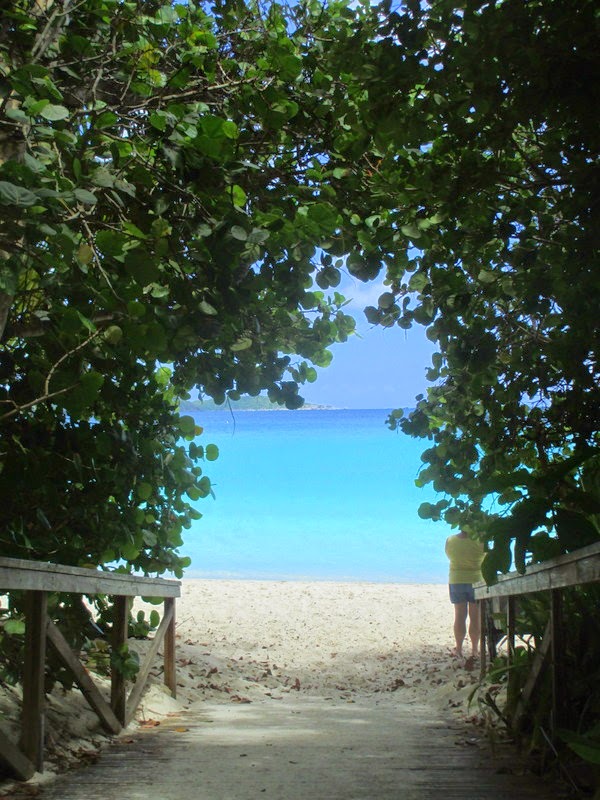 Isn't that picture inviting?  I just want to walk down that path again...

I loved Trunk Bay, but I got frustrated, because supposedly it had wonderful snorkeling and I was tired of waiting to see what was in the water until I got to look at my pictures at night.  Fortunately, the next day, my mom was a genius and came up with a solution, but in the meantime, it was hard for me not to get annoyed.  It was especially hard for me not to get annoyed because I was tired and hurting.  I did still get some good underwater pictures, though.  Here's my favorite one for the day: 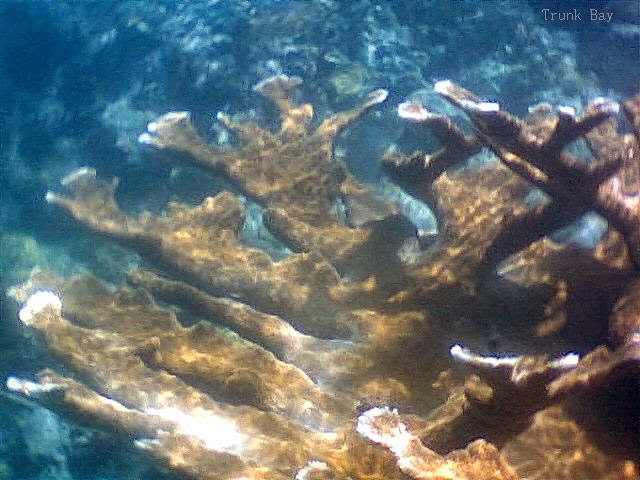 It's some kind of coral.
On our way back to our cute cottage, we stopped at a overlook and I captured some gorgeous pictures: 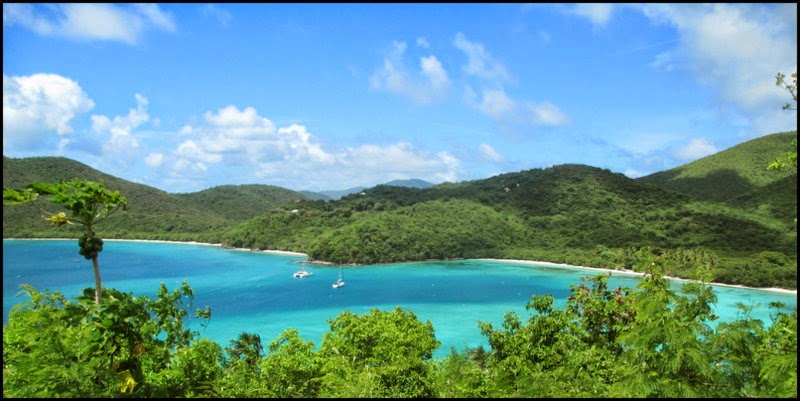 (That's a papaya tree on the left.) 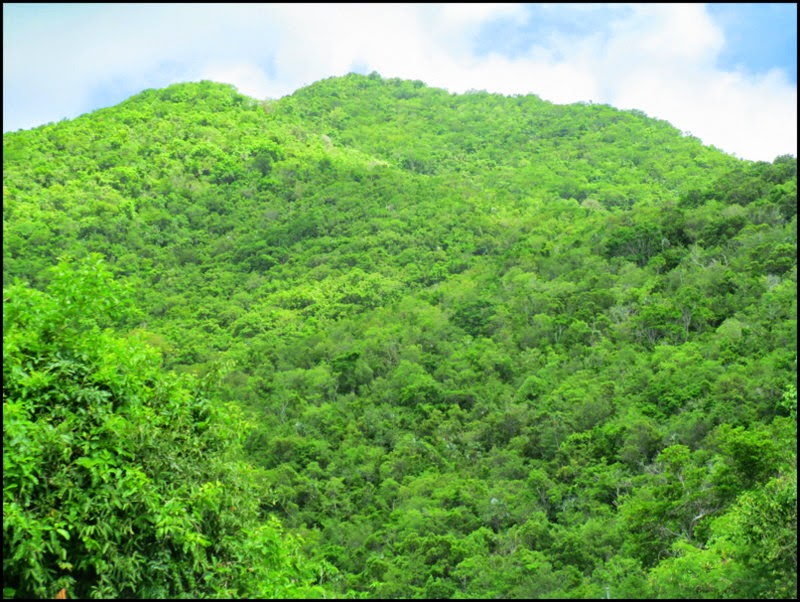 I just love the different shades of green!
Now on vacation, as in life, it is important to have goals and my mom came up with a good one-she proposed that we have a smoothie everyday!  My dad and I deemed this a worthy goal and the fruity, sugary sweetness soon perked me up. 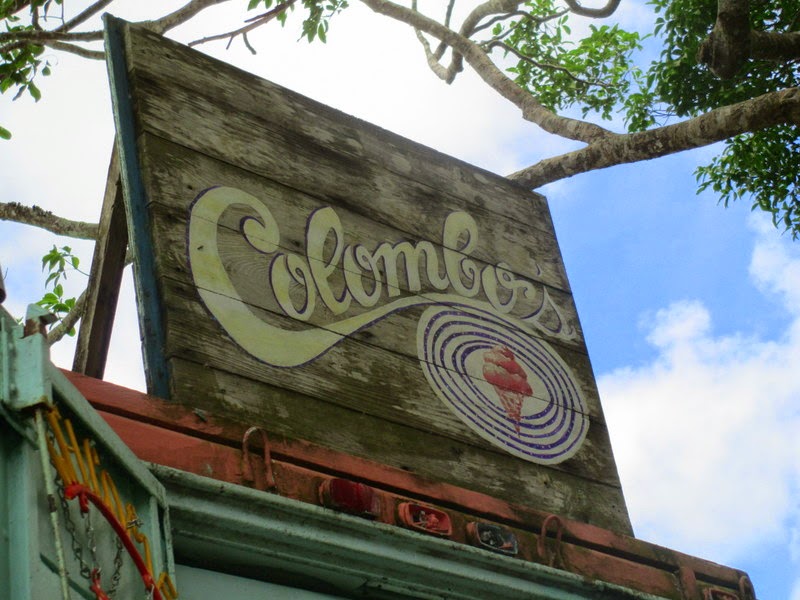 Colombo's turned out to be one of our favorite smoothie places!
After a much needed nap, we went on the Francis Bay Walking Trail.  I still was not feeling that well, but I am glad I went, because once again, I took beautiful pictures.  The trail took us to the beach: 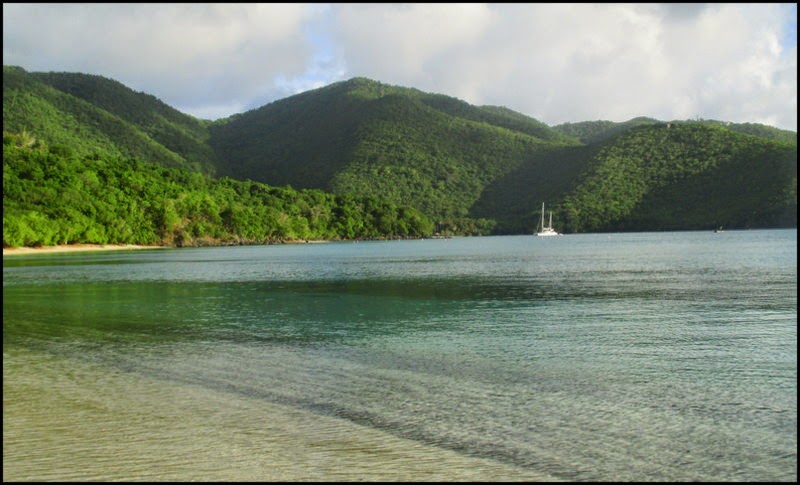 I believe my favorite trail of the day was at Francis Bay, but I am not sure.  We walked it right before dusk, on this boardwalk where we were covered by a canopy of creepy mangroves.  Actually, like a lot of things I would later discover on the island, the nature surrounding me was slightly creepy and yet very beautiful.  The trees provided wonderful shade. 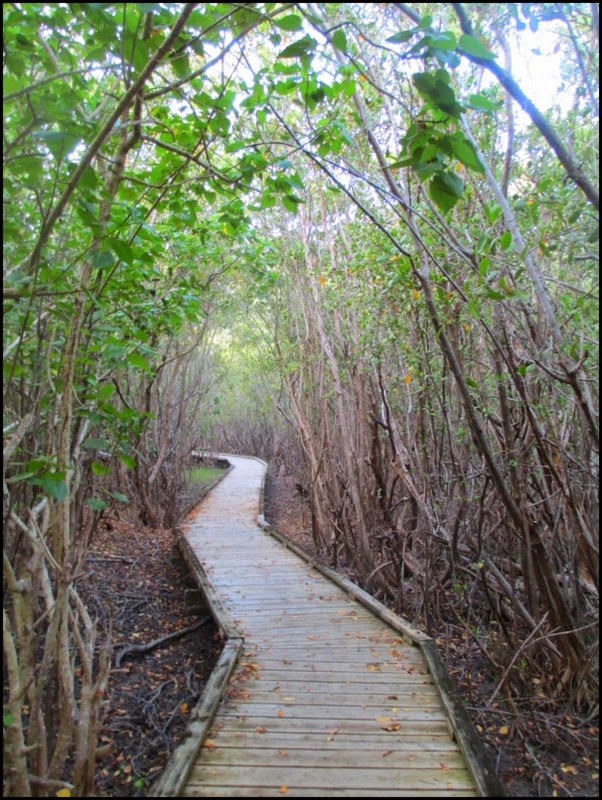 We stopped at a pond and saw ducks! 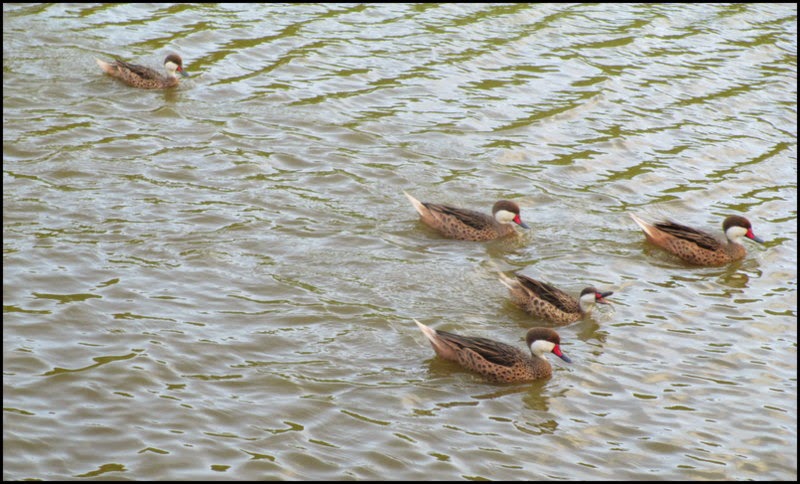 I had a good day!  Unfortunately, when I got home my mind was so tired that it was stuck ruminating.  I am embarrassed to say that it was stuck on repeat obsessing about my body.  I felt weird that I was wearing a long sleeved shirt when I went snorkeling when everyone else was wearing bikinis.  I was doing it because I did not want to get any more sunburned, but they did not know that-what if they thought that I am - *gasp* - unfashionable?  I decided to pull out my most tried and true DBT coping skill, which is to distract myself until the thoughts pass.  I pulled out my "Girls Are Not Chicks" coloring book and the first page I turned to instantly got my mind back where it needed to be. 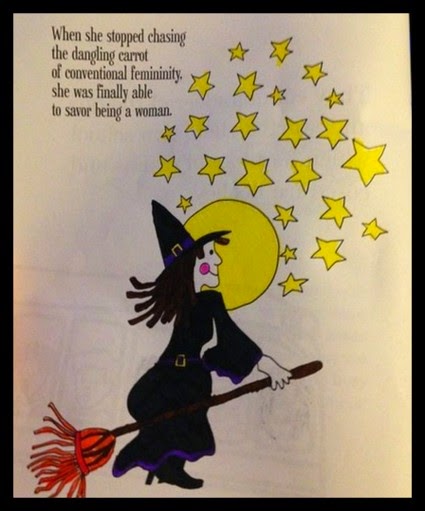 "When she stopped chasing the dangling carrot of conventional femininity, she was finally able to savor being a women."
After reading this quote and coloring the page, I felt free!  During the trip, I thought of the quote often and I even made it into a mantra by telling myself,

I do not need conventional femininity!

This was very handy during the trip, because as I quickly found out, the Virgin Islands are not a place to be classically beautiful. My hair was always frizzy, my skin was greasy from the sunscreen and I eventually gave up from showing skin on the beach at all and instead chose to wear both a long-sleeved shirt AND leggings, just to be extra sure that I would not get a sun-burn. Conventional beauty was out, but health and happiness was in!  The myth is that conventional womanhood is obtainable and at least where I was, it was not.  The truth is that it never really is for long-we might as well be happy with ourselves and our own versions of woman or manhood, whatever that means for us and throw "conventionality" away.

Dances with Fat – How Can You Say Weight Loss Doesn’t Work?
The idea of weight loss creating health is what I call a Galileo Issue – it’s widely believed, fervently supported, it’s heresy to suggest that it’s not true, and yet it is not supported by evidence.
Mindless Productivity - Not Everyone Is Beautiful
Beauty is the only trait that everyone gets free access to. Why?
Because we have created a culture that values beauty above all other innate traits…for women, at least. Men are generally valued by their success, which is seen solely as a result of talent and hard work, despite how much it depends on luck and knowing the right people.