What You Need to Know about GLBTQI Mental Health 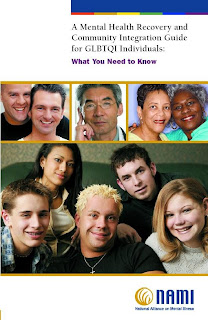 Many queer folk have some kind of serious mental illness and need help. Unfortunately, many times these people do not get the help they need, because they are afraid to ask for it or because they do not know if anyone will listen to them without judging. I know this from personal experience.
I am a bisexual, who is more interested in women. In fact, it is only recently that I have decided to embrace my bisexuality and not claim to be a lesbian.
Proposition 8 really messed me up.
I already had issues with feeling less than human, what with my school insurance hardly being willing to pay for my needs, so when the people of California decided that two people who love each other and who also simply happen to be of the same sex should be denied the right to marry, my humanity suffered. Fortunately, by this time in my recovery, I had learned enough coping skills, so that I did not relapse into my illness, but in 2005 that was not the case.
In February 2005, my best friend informed me that she was engaged. I felt incredibly good for her, but also incredibly jealous and sad for me. I was the one who had always dreamed of getting married in a church with the white dress and I had to face the fact that that might never happen.
I was told on a Monday and by Friday I was in the hospital being treated for an eating disorder for the first time. I can barely remember what happened in that between Monday and Friday-I stopped eating completely and pretty much stopped drinking water too. I had no memory-I was a zombie.
Fortunately, I was also attending SkyLand Trail-a wonderful recovery center in Atlanta-at the time and when I told them that I had called a suicide hotline the night before, it was decided that I needed to go to the hospital and I agreed.
NAMI has come out with a 12-page booklet called, A Mental Health Recovery and Community Integration Guide for GLBTQI Individuals: What You Need to Know
The site below has links to all kinds of GLBTQI mental health resources and mental health fact sheets, including a reference guide to the Association of Gay and Lesbian Psychiatrists- many resources offered including a directory of therapists who are gay and lesbian affirmative.
http://www.nami.org/Template.cfm?Section=Resources&Template=/ContentManagement/HTMLDisplay.cfm&ContentID=28243
This is so important, for as queer folk become more visible and political, they will need more resources to help them recover. We are all children of God.