All I Have Are Questions - The Pulse Shooting

Moreover, the Kingdom is not somewhere else, rather it is among you, inside you, and outside you.  Neither is it some time in the future, for it is here, spread out on the earth; people just do not see it. ~ Marcus Borg

I pass as straight most of the time and so I have a lot of privilege in many ways.  But still, I possess a lot of fear related to my queerness.  It is a level of fear that I think a lot of people don't realize.  For instance, for the past sixteen years I have attended a church with a lesbian minister that is attended by a lot of LGBTQ people, which means that for the past sixteen years I have feared that someone will bomb or otherwise terrorize the place where I worship.  That may sound extreme to some but hate-filled shootings and bombings are on the rise and have been for a while now.  I don't have ease of mind before telling someone about my pansexual poly relationship for the first time.  I have not had any negative reactions so far but I know I will one day.

One of my strongest memories is how homophobic the first college I attended was.  (Although I must give a shout-out to the wonderful friends I made there - we really tried to support each other as much as we could.). Because of that religiously based homophobia, I am extremely wary of people that talk about hellfire. And yet, it's not all about me.
Today fifty people were killed who frequent an LGBT nightclub and I really do not care if the person was connected to ISIS or not.  To me, there are plenty of hateful organizations that rail against queer people and it easily could have been from another group.
Today, at a supposed to be fun bicycle event in Atlanta, two separate homeless men who probably have a mental illness were holding signs and yelling about repentance and how we all have sinned.  Another man, obviously homeless and having a mental illness, sat beside me outside and proceeded to tell me about how he would break the neck of any person that bothered him.
They're right - we have all sinned and we do need to repent.  One of the men spoke about how he sleeps outside and my heart broke.  I was triggered beyond belief by their words and yet I was still full of compassion for them.  Our nation does need to repent of our greedy ways.  Our ways that place money above mental healthcare, guns above homes, judgment above tolerance.  We need feminism because older white men are the group with the highest suicide rate, we need tolerance because it seems that people no longer know how to properly communicate.
We need hope.
I don't have any solutions.
My wish is that people would care more and that people were taught in schools how to respectfully dialogue with one another.
I try to be an example but I cannot be everything.
I tried to go do something fun today and just ended up getting more triggered, more mournful.
Maybe that's the point. Sometimes life sucks and it cannot be ignored.  If we, as a nation, are confronted by our evil, then maybe we will have to do something about it.
It seems to me that having a mental illness is a pretty logical reaction to a world gone mad.
Why don't we require people to take a gun safety class when they buy a gun?
Why don't we require gun owners to properly store their guns?
Why do we let people with a violent history, including domestic abuse, keep a gun?
Why don't we encourage thoughtful dialogue instead of making everything sensational?
Why can't we teach comprehensive sex education in school that also addresses sexual orientation instead of pretending that abstinent only sex ed will somehow magically prevent pregnancy, regret, and disease?
Why do we let the media only follow hateful men?
Why do WE follow the hateful men?
How can we hear the news and still be bringers of hope?
I doubt the men who were screaming about repentance today even knew what had happened.  In my mind, I was brought back to college when it was common for a student to go to another and say that they were going to hell for being gay.  Where my feminist student group continually had to re-hang our flyers, as they were continually being torn down.  Where the gay-straight alliance had to meet at a professor's house in secret because we were not allowed by the school to officially meet on campus.  And who decreed that?  Good ol' founder of Chick-Fil-A, Truett Cathy, who threatened to take away his money from the school if there was an official gay-straight alliance on the grounds.  Nowadays, his son, Dan Cathy, allows the alliance, as long as the students only gather for social purposes and not for activism.  How very Christian of him.
I am Christian and yet I hate Christians.  When hearing the loud repentance proclaimers, I often wonder if the old prophets weren't just assholes.   Yelling at me to repent when I am already hurting seems like an asshole-ish thing to do.  Or maybe, like these men, they were all mentally ill and just didn't know how to best express themselves.
I don't know what to do with these feelings, except to try to be the best that I can be.  To not let the loudest speakers take away my soul and all of my joy.  To continually love, even when hard.  To continue to be a sensitive, emotional person in pain.
We all need a hug today.
Let the violence stop with you. 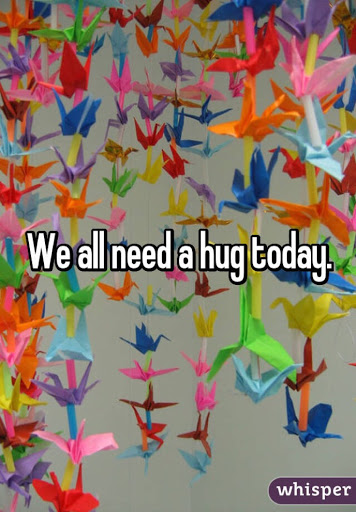 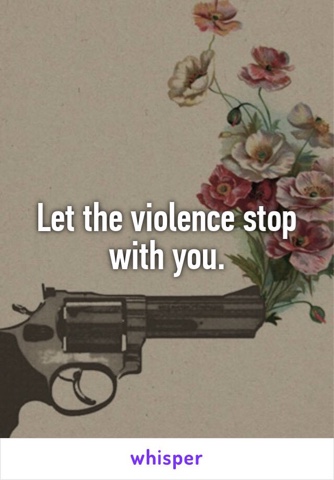