Be Strong - Trying Out Something New

Even though I have a new fancy keyboard and IPad, I am finding it hard to blog like I used to.  I realized last night that something will have to change.  It's strange because I worked hard to hone my blogging skills and become a good essayist but I may have to go back to the basics.  The funny thing is that even though I have stopped writing long posts, I still write a lot of shorter posts on Facebook that I think are quite good.  Ultimately, I want to get back to writing longer, more thoughtful pieces.  In the meantime, in order to keep this blog going the format will have to change and so I think I will start sharing my short little tidbits that I post on various websites on a nearly daily basis is a good compromise. There's no sense in keeping my writing confined to my friends when I'm wanting to share a wider recovery message with the world on this blog.

**************
In response to the article, "The Rise of the Artisanal Funeral," which is about getting more in touch with death.  I want to meet the funeral director and be her friend.  I'm giving my body to science and medicine but I love the idea.  Since I won't be giving people a body, we're going to have to go the party route.  I think about this often, actually.  I wish more people were more comfortable with death-I think we would lose a lot of fear.
***************
I identify as many many many things.  One of them is disabled (mental yes, but I have some physical stuff too - all invisible - except for my height which I am realizing more and more lately is a disability in itself as the world really is not made for people my height).  I find it empowering to claim my limitations and demand that people honor them.
****************
In my response to the article, "Anglican Communion to Restrict US Church Over Gay Marriage."   So much for actual unity and now more people are going to leave the Church.  If the church doesn't become relevant, it's going to die.  In this case, it wouldn't be a bad thing.  I love my own church but news like this is discouraging, mainly because I know churches as progressive as mine are super rare outside of big cities and fundamentalist churches cause death to LGBT people, especially teenagers. When you're told that there is something inherently wrong with you and your only option is to abstain from any kind of romantic or sexual relationship then people, especially young people, are going to experience serious issues including high suicide rates and homelessness.  Which I seriously don't think is what the church is supposed to be about.   A friend responded that there is something inherently wrong with all of us, hence the need for salvation. My problem is that the church is separating gay relationships from straight.  All relationships have the potential to be sinful or loving - it's not the gender that matters and saying so kills.  "It might be the need for salvation but it's not the need to abstain from honoring loving, consenting partnerships between two people."
**************
Got a bad headache, so went home instead of to the rally, which is disappointing. In case you don't know, there will be a 24/7 vigil in front of Decatur County Courthouse from now until January 21st for Anthony Hill.  If my body starts cooperating, I may pop over to support - we shall see.  In any case, it is cold and they could use your prayers, good vibrations and warm blankets.  If you can, stop by and say a good word.  It is organized by Rise Up Georgia, an intersectional social justice group that I really respect.  Their hashtag for the event is #mentalillnessisnotacrime
*************
This was fun putting together!  My hope is that consolidating my weekly blurbs will be a lot easier to put together and so I can be still blogging more.   Everyone is sick in Atlanta right now, so be sure to drink lots of hot tea, sleep well and take your vitamins - we need each other to be present during these times.  Blessed be! 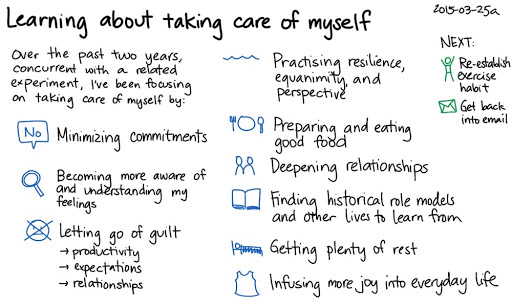 From artist Sacha Chua on Flickr, a Creative Commons license

One comment on “Be Strong - Trying Out Something New”