Cheering Up with Books and Cupcakes

Today has been frustrating, as I have had stomach pains all day.  Yuck!  I have them on occasion and always have.  To cheer myself up, I am going to share a very happy and triumphant memory with you: my last book club meeting!  I meant to share it weeks ago.

Over a year ago, I started attending a classics book club in order to meet more people in my area.  I was nervous at first, but I have grown to feel very comfortable in the club and I look forward to attending it.  What's more is that the other members seem to genuinely look forward to me coming too.  I love the opportunity to read more classics, as I focused my English major more on poetry than prose and so I missed out reading a lot of the classics that people have assumed an English major would have read.  We're a passionate bunch, as we argue over why we did or did not enjoy the book and what we think it means.  Despite all this, I started to want more.  I wanted a group that would argue with the same kind of passion about feminist literature. I had always wanted to study women's studies in college, but I never had the time.  I study feminism on my own, but I wanted some people to discuss the liberating ideas with and so I started my feminism book club in October.

I had to be patient, as our first several meetings had low attendance-in December, only one other person showed up!  Fortunately, January was my saving grace, as five other womyn attended!  It was a really triumphant moment for me and proof that I am capable of accomplishing my goals.  Not only that, but that my goals resonate with other people as well.  Our little group stayed and socialized until the cupcake shop, Sweets on the Square, closed. 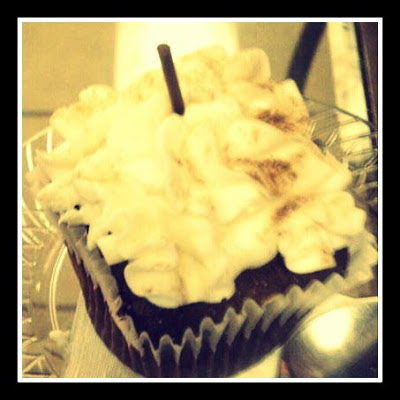 Sweet and spicy and chocolate-y.  I don't like how early this place closes, but I really do like their cupcakes.  Fulfilling goals are sweet!

Thinking about that day a few weeks ago has gotten me to smile and my stomach has stopped hurting. Hopefully tomorrow will be pain free also.

Owldolatrous Press –MLK: Part of the Problem
On this special day, when our first African-American President so eloquently gave gay and lesbian equality its first acknowledgement in his inaugural address, let’s remind ourselves that the drive toward dignity and freedom is not a masculine trait, or a feminine trait. It’s a trait we all share.
That Crazy Crippled Chick – I Have a Dream
I have a dream that the heavy black curtain of stigma and shame that smothered FDR will be drawn aside in favor of the blinding light of pride.  That my future children will not have to face questions about the competency of their upbringing, just because they have a disabled mother.  That all ways of experiencing the beauty of the world will be seen as equally valid and equally breathtaking.
Womanist Musings – Tracking Homophobic Speechon Twitter
You don't have to prove that you have the worst oppression ever, to state unequivocally that what you are experiencing is damaging to the soul.