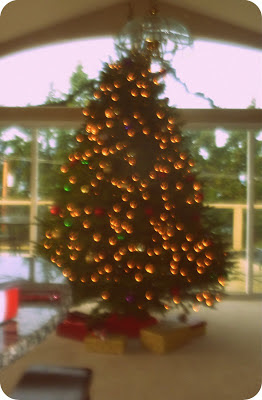 I am very happy today.  We unwrapped presents and then lounged around for most of the day, which is why I was glad to get up and help my mom make dinner and dessert - pecan rice, asparagus, beef tenderloin, and apple pie! 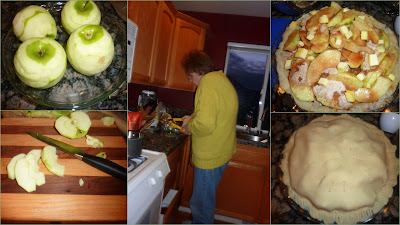 (My mom's in the middle juicing a lemon.) 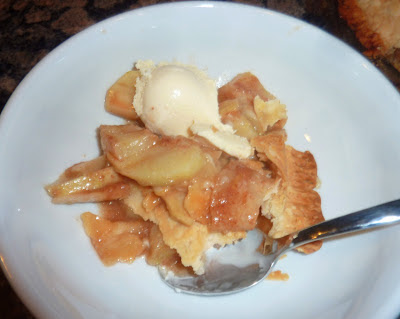 Yummy!  The cinnamon apples with their crumbly crust tasted great, especially with the vanilla ice cream.  We had apples left over, so we made applesauce too.

It's wonderful days like this when I realize just how privileged I am - I have a loving family, stable shelter, an abundant amount of food, warm clothes, the medications I need, and I received presents of things that I really don't need.  I also cannot overlook that I am stable on my meds, which hasn't always been the case-I have spent many a Christmas in the depths of anxiety and depression.  One thing I am not privileged in by our society's standards is being a woman.  Someone that reblogged a quote on tumblr about men's privilege also commented that women have privilege too:

What about feminist women who don’t understand privilege? Female privilege is that people assume you understand and are automatically empathic/familiar with the world of ‘privilege’ and ‘oppression’. Women can’t possibly be sexist pigs and can be accepted as a feminist, no questions asked. Men who actually care about women’s rights are scrutinized or labeled as ‘false allies’. The only way for them to have a place in the conversation is to be a submissive doormat.

While it is true that women can do some things that men cannot, like birth babies, from a societal standpoint, we are still oppressed.  Now different women experience different levels of oppression-I have talked about this intersectional way of thinking before-I am oppressed as a woman, but I am not, because of my skin color.  I am oppressed, because of my disability, but I am not, because I am cis-gender.  Those are just two examples.  So, I have some privilege, but it is for reasons other than for being female.

I am not going to address everything that is wrong about the comment, as I think most of my readers will automatically see what is so laughable about it, but I will address a few things. This man seems to think that all women are feminist or at least are accepted as feminists and that is simply not true.  Just because you are a woman does not automatically mean that you are a feminist-I have witnessed this confusion on tumblr before and it bothers me.  A feminist works to end sexist oppression and not all women are committed to that cause. Also, personally, I absolutely do not believe that a male ally has to be a "submissive doormat."  I do see that comment as being incredibly defensive and so I do not think that he is being a good ally, himself.  The commenter needs to ask himself why he is so bothered by the thought that men need to recognize their own privilege (my original quote).  If men are sometimes questioned in their roles as allies, it is only because women live in a world where we learn to fear men.  Most men are not actively working to end sexist oppression.  And all men are going to oppress women in some way at some point in their lives, just from living in our culture, and so women have many reasons to be cautious with men.  That being said, I appreciate my male allies.  I want them to speak out against sexist oppression when appropriate and I want them to respectfully listen to what women have to say too.  I want them to take a step back and give women some of their room, but I still do not think that that is the same thing as being a "submissive doormat."  Basically, I want equality for everyone and submissiveness for no one-unless freely given, of course.

As this delicious and thought-provoking Christmas comes to an end, I hope that you had a great day like I did.  If not, then there's always next year!  Happy holidays! 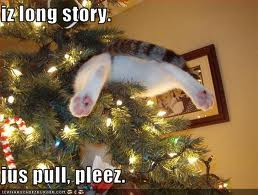 Love, Joy, Feminism - Awesome Comment Award: Emjb on how fetuses are made
One thing that was powerful to me was when a pro-choice woman pointed out that a fetus doesn’t just grow *in* a woman’s body, it is *made from* a woman’s body.
Color Lines - We Can’t Fix Our Economy Without Confronting White Supremacy
White supremacy is a low-level assumption about characteristics that white people allegedly have which transforms inequality between them and everyone else into something natural. It often masks itself as fairness and goes unquestioned as a result. Using this definition, our current tax code is a work of white supremacy.

This Ain’t Livin - ONE OF THESE THINGS IS JUST NOT THE SAME: LUMPING KIDS WITH DIFFERENT NEEDS TOGETHER

There’s a strong desire to standardise education in the United States, to make it one-size-fits-all, to promote a single unified theory of educational experience and methodology, and it just doesn’t work. Different student needs are not a bad thing, something to be punished, something to medicate students for in order to force them to conform. They’re just needs, and they need to be identified and addressed rather than shoved under the table and ignored.