Happy Birthday to Me! (And to Trying New Foods...)

May 9th was my 28th birthday, though my family did not celebrate it until a few days later when I had the day off from work. (Yes, that's right, I worked nine hours on my birthday! Ugh!) We went to a Mexican restaurant in Decatur called Coyote's Mexican Grill, that while it may not look like anything special, has amazing food. I got a steak burrito covered in a cheese sauce with avocado salad. Yum! Then we went to Charis, Atlanta's independent feminist bookstore in Little Five Points, so I could buy a book that just came out with my birthday money. 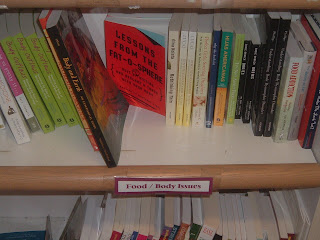 It's titled, "Lessons from the Fat-O-Sphere: Quit Dieting and Declare a Truce with Your Body" by Kate Harding and Marianne Kirby. I am very excited about reading this book, as I am a follower of Harding's blog, Shapely Prose. Her blog, with its sharp wit, fierce wisdom, and clever references to literature - I was an English major, after all! - has influenced my whole outlook on life in a positive way. Even more exciting than the prospect of reading this book is that I found out that Kate Harding is going to come to Charis sometime this summer for a book signing! I am SO there!
Unfortunately, due to the weakness of my stomach, the richness of the food, and the fact that I started my period in the middle of the celebratory meal, so that we had to search for a gas station before going to the bookstore, I had horrible stomach pain and we had to leave the store early. Boo! I felt like a party-pooper, but I took a long nap when we got home...
And then it was time for CAKE!!! 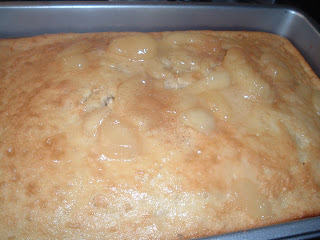 My Dad and I had made it together that morning and it was my own idea: white cake mix combined with 3/4's can of apple pie filling. It came out very moist and yummy! I baked it in the oven about twenty minutes and then I put the rest of the pie filling on top. Back it went into the oven for approximately five minutes and when I took it out, my dad sprinkled it with cinnamon. So, all in all, a good and very yummy birthday. There's always next year for something spectacular... 🙂