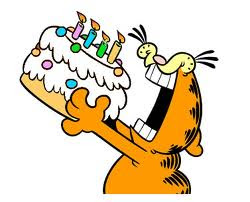 On May 9th I turned 31.  My parents and I went out to eat, which was nice.  One of my presents was a cute cupcake carrier and so I decided to crown myself Cupcake Queen!!!  I have visions of me visiting friends with my cupcakes, spreading goodwill and cupcake cheer to all.  Of course, to do this I first need to make the cupcakes.  Upon arriving back at home, I made sweet potato cupcakes.

I got the recipe from allrecipes.com. 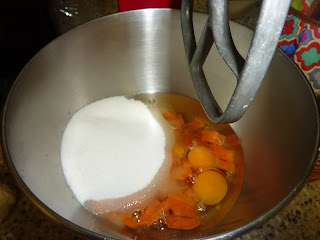 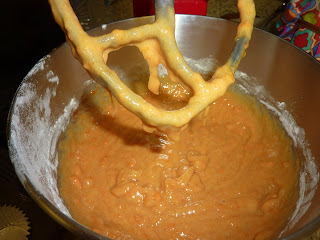 Pour batter into paper liners, filling 2/3 full.  Bake in preheated oven until a toothpick inserted in the center of a cupcake comes out clean, 17 to 20 minutes. Cool in pans for 5 minutes, transfer to wire rack to cool completely.  Beat together cream cheese and butter until fluffy. 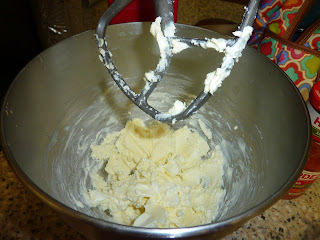 (Look at that fluffiness!) Beat in the vanilla extract and confectioners sugar; mix until smooth. Frost cool cupcakes with cream cheese frosting. 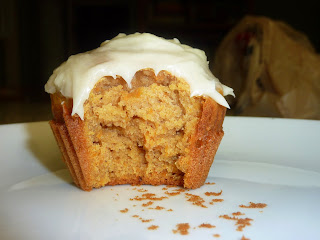 Now take a bite!  The sweet potato cupcakes were a success!  The taste actually reminded me of a carrot or spice cake.  The cupcake was denser than most, but still really moist.  The only change that I would make is that next time I would add more cream cheese and have less butter in the frosting, as it was a little rich for me.  Either way, I certainly would just put on enough to cover the top. 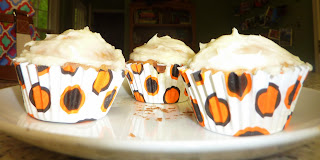 Look at those pretty polka-dotted cupcakes.  They matched my outfit that day! 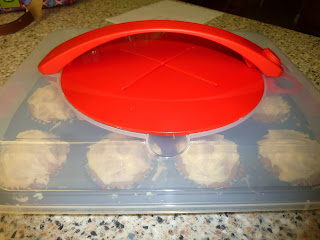 Isn't it cool?  It's in my favorite color and the top actually folds out into a three-tiered cupcake stand! It's like magic!  I went to one of my support groups that night and I brought some of my cupcakes with me using the cupcake carrier.  Everyone admired the carrier and the cupcakes.  That night, when I reflected on my day, I thought that even though I had not celebrated it in wild style, still I had spent time with both family and friends while enjoying delicious food that I had made for them and I was satisfied.  I had a good birthday and I hope 31 is going to be a good year!

Stay tuned to hear about the curry dinner I made that night.... 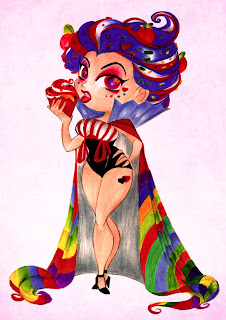 […] we tend to make political—and other—decisions not out of Christianity's highest values like compassion, generosity, and responsibility, but out of secular American values like self-reliance, self-interest, and acquisition.