It's time for another giveaway!  How fun!  I told my tumblr followers I would do a giveaway when I reached the 100 follower mark and I now have 104, so it's time!  I think it's nice that it is also corresponding with the new year.

Here's a photo of the three items I'm giving away: 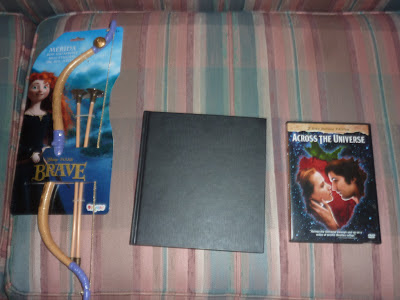 Hone your archery skills like the heroine Merida with our Brave Bow and Arrows. Brave Bow is made of sparkly plastic with purple accents and strung with elastic. Bow also comes with two arrows that feature suction cups on one end for sticking to smooth, flat surfaces. Working Bow and Arrows is safe for use against enemies, real or imagined. Recommended for ages 4 and up. Brave Bow and Arrows is an officially licensed ©Disney/Pixar product (description from partycity.com)

Brave has become one of my newest favorite movies and I was going to dress up as Merida at DragonCon, but it didn't work out. I wanted a bow and arrow like the one she used in the movie, but the one I got is sized for a four-year-old, which is why I am giving it away. It would make a great birthday present for a little girl or boy. Or have fun shooting arrows yourself!

Crowns photographer Michael Cunningham and author and journalist George Alexander have captured the marvelous trinity of black women, hair, and beauty salons in the glorious Queens: Portraits of Black Women and Their Fabulous Hair. Angela Garner says that “The beauty salon is the one great thing we get to share as African American women. It’s therapeutic.” Tisch Sims says that wearing fantasy hair makes her feel “like a goddess, a queen.” From the afro to the ponytail to dreadlocks to braids to relaxed hair to fantasy hair; from “good hair” to bad hair days, in this stunningly designed book black women from the United States, Africa, and London explore the fascination with hair and beauty that has long been a cherished part of African American culture. In fifty gorgeous photographs accompanied by vivid, personal narratives, Queens, by turns moving and funny, is the ultimate all-occasion gift book, perfect for Christmas, Kwanzaa, Mother’s Day, and birthdays.

(The cover, which I unfortunately don't have.)

I'm sorry that the book comes without the cover, but otherwise it is as good as new. To be honest, I'm not sure why I bought it-it was a Borders "bargain book" and the pictures are great. I think I thought it would be a great coffee table book, but as I do not have my own coffee table anymore, I don't need that type of book anymore. The pictures in it are great-black and white photos of Black women's hair in all kinds of styles, with words by each explaining why the woman loves her hairstyle. A neat book.

3. The movie, "Across the Universe" (Two Disc, Special Edition) -

Across the Universe, from director Julie Taymor, is a revolutionary rock musical that re-imagines America in the turbulent late-1960s, a time when battle lines were being drawn at home and abroad. When young dockworker Jude (Jim Sturgess) leaves Liverpool to find his estranged father in America, he is swept up by the waves of change that are re-shaping the nation. Jude falls in love with Lucy (Evan Rachel Wood), a rich but sheltered American girl who joins the growing anti-war movement in New York's Greenwich Village. As the body count in Vietnam rises, political tensions at home spiral out of control and the star-crossed lovers find themselves in a psychedelic world gone mad. With a cameo by Bono, Across the Universe is "the kind of movie you watch again, like listening to a favorite album." (Roger Ebert, Chicago Sun-Times)

I love an artsy musical, but I'm weird and prefer my movies lower budget. My motto is "A low budget gives a movie its heart." I really thought I would like this movie, so I bought it without having watched it first, but it was just too polished for me. Polished, and I thought it had a cliched and disjointed story line. It has cool sets and costumes though. A lot of my friends like it and I certainly don't think it's a bad movie-just not my style.

I will post the winner in two weeks, Tuesday, January 15th. Good luck! 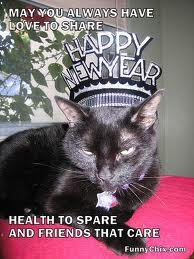 "May you always have love to share, health to spare, and friends that care."